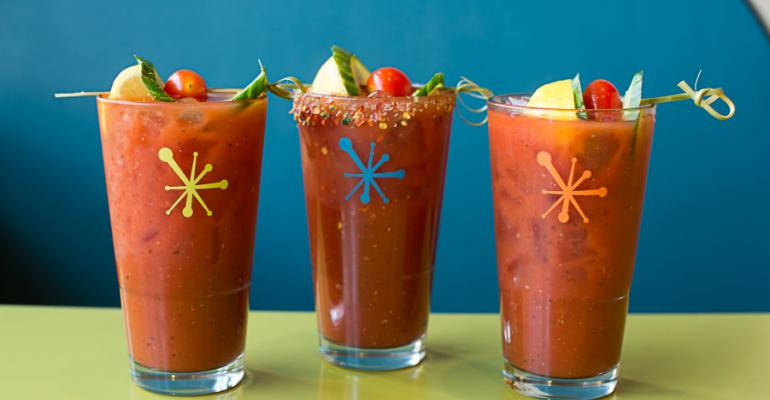 Snooze an A.M. Eatery shows that breakfast can still be successful

There has been a lot of talk about the breakfast daypart being devastated by former office workers who have ceased their daily morning commutes, but that’s not the case if your business is centered around leisurely breakfasts and brunch with friends, augmented by a Bloody Mary or three, which is the model of Snooze an A.M. Eatery.

The casual-dining breakfast-and-brunch chain opened six new restaurants in the U.S. in 2021 and sales grew from $80.9 million to $139.2 million.

CEO David Birzon said naysayers told him the Denver-based chain would suffer with more people working from home, “but the opposite is really true,” he said. “Our Monday-through-Friday [traffic] has gone up significantly. We believe because people can work from home and have more flexibility in their schedules, they’re more likely to hold business meetings with a colleague for breakfast, or take the time to meet a friend for breakfast. That was really a great surprise.”

He said sales would have been even higher, but Snooze’s six locations in California weren’t able to open until June or July of 2021.

“As we were able to bring the restaurants back online, the comp sales over 2019 were through the roof,” he said. “A lot of it was pent-up guest demand.”

Alcohol sales also were up “significantly,” he said; pre-COVID alcohol sales were around 10-12% of total sales, and now they’re in the 13-16% range. Total beverage sales are now around 25%, putting the chain solidly in the casual-dining category (as opposed to family dining).

He said Snooze has benefitted from the fact that people treat the chain as a special-occasion restaurant, and over the past two years people have been more inclined to indulge. The average per-person check of around $17 means they can afford to do so, too.

The surge in takeout breakfast, which started during lockdown but continued afterwards, has also been a pleasant surprise.

“We were a very successful one-trick pony” before the pandemic, he said. “We were fantastic at having lines out the door and having guests wait 45 minutes to get a table and have dine-in breakfast with us.”

In a stroke of good luck, Birzon said the chain was actually in test at one restaurant with online ordering platform Olo just as the pandemic struck, “so we were able to go live within 10 days of COVID hitting, and we were able to develop this incredible business.”

Off-premises dining now accounts for about 16% of Snooze’s business and continues to grow even as people go out more.

Birzon said that he used to think it was hard enough to get eggs from the kitchen to the dining room without getting cold, “but the reality is our food travels really well.” Although Snooze started with a takeout menu limited to what the team thought would travel well, like breakfast sandwiches, once they opened up the whole menu to off-premises ordering they continued to succeed.

“We invested heavily in new packaging for, for example, to-go eggs Benedict. We created these little cardboard inserts to kind of coddle the Benedicts so they don’t break in transit, and the reviews on the to-go food are excellent,” he said.

In fact, there was such a demand for takeout that the chain did an operational test for a virtual breakfast sandwich concept called Bodegga out of its two restaurants in Charlotte, N.C., and a market test is slated for Houston at the beginning of July.

“We think there’s a big opportunity for us,” Birzon said.

So is catering, particularly as more people return to offices, something that companies are enticing them to do with perks such as catered breakfasts.

“As the workplace gets more creative, our business has to step up our ability to meet that,” Birzon said, adding that companies had been giving employees gift cards to have Snooze breakfasts delivered to their homes and then having virtual breakfast meetings.

Snooze plans to ramp up expansion going forward, with 10 restaurants slated to open this year and another 12-13 per year going forward, “which for full-service casual dining is a big number,” he said.

The chain expanded into Atlanta during the pandemic and just opened in Nashville, and is continuing to in-fill in existing markets such as Colorado and Texas.

Next year, Snooze plans to expand to Florida.