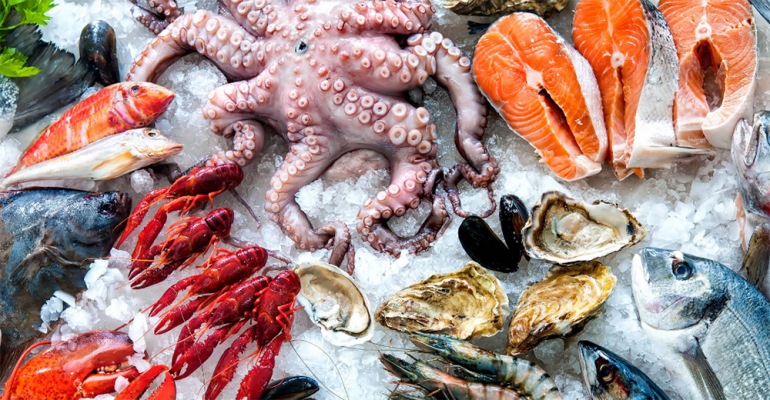 Seafood consumers are a fairly small group compared to those who buy beef, pork and chicken. But they’re also a lucrative group that spends more money on groceries each week and are therefore worth courting, according to a recent Food Marketing Institute report.

In The Power of Seafood, the FMI’s inaugural study on American consumers’ approach to fish and shellfish, the trade group found that just 21% of consumers eat seafood frequently — twice a week or more — and another 35% eat it about once a month.

Rick Stein, vice president of fresh foods at the FMI, presented these findings at the recent Seafood Expo North America, cautioning attendees that, since this is the first study of its kind, it only represents data points rather than trends. But those points were illuminating.

Americans eat 16 pounds of seafood per person each year, compared to 108 pounds of red meat and 109 pounds of poultry, according to U.S. Department of Agriculture data cited in the FMI report. Fresh meat and produce generate $50 billion and $60 billion in retail sales, respectively, according to the FMI. By comparison, fresh, frozen and center-store seafood combined bring in $12 billion.

However, frequent seafood eaters spend $143 per week on groceries, compared to $116 for those who eat seafood less than once a month, and they tend to buy higher-margin items: Their average basket is three times more profitable than non-seafood eaters’ purchases, the FMI found.

Some 70% of seafood consumers buy their fish and shellfish at their primary grocery, compared to 78% for meat. While meat buyers say price is the primary consideration for their purchases, “quality” is the main factor when shopping for seafood, followed by freshness, taste and flavor.

Stein said he’d have to set up a separate focus group to determine what exactly consumers mean by “quality,” but the fact that it trumps price is telling.

However, he added, seafood purchases are often impulse buys. In fact, 38% of purchases of fish and shellfish are unplanned, driven mostly by the customer’s mood. Of those surveyed, 68% said the fact that they were “just in the mood” for seafood influenced their purchase. However nearly as many, 65%, said they were influenced by price or the fact that the seafood they were buying was on sale.

Online shopping of seafood, unlike much other shopping, is not on-trend. Although consumers who buy seafood “show a very high propensity to have purchased groceries online,” they still buy seafood in person, and they buy it at a wider variety of venues than other food such as meat or produce, the FMI found. Those venues include supermarkets, supercenters and club stores, but also specialty seafood stores, farmers market, seafood stand and stores specializing in natural and/or organic products.

The study found that consumers divide their seafood purchases about equally between fresh and frozen, and they are as likely to make their fresh purchases from a self-serve counter as a seafood case. 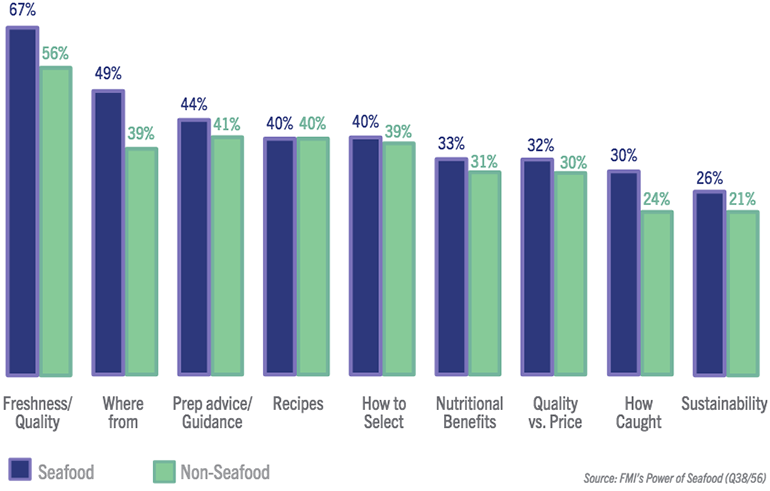 The three dominant seafood varieties — shrimp, salmon and tuna — account for about 60% of total seafood revenue. However, the remaining 40% are divided among “a whole range of fin fish, mollusks and crustaceans,” according to the report.

Consumers interact differently with each of the “big three” seafoods. Shrimp is mostly bought frozen. Salmon, on the other hand, is mostly fresh, and more than 90% of tuna is a center-store purchase, such precooked canned tuna.

Customers would like to know more about seafood, the FMI found: Only 29% think they’re knowledgeable about how to buy it, and 28% about how to cook it.

“Even the non-seafood consumer … wants to know more ways to cook it,” Stein said. “So clearly there’s a need for education out there.”

He added that 48% of consumers say there’s not enough information available. That is despite the fact that websites of supermarkets and trade bodies such as the Alaska Seafood Marketing Institute provide information on purchasing and cooking seafood, and supermarkets’ seafood departments are generous with recipe cards and other educational tools.

Despite the media attention given to sustainability issues, it remains of marginal interest to seafood consumers.

However, the FMI report characterized that segment of consumers who want to know about seafood's sustainability as “small, but often loud.”

“Thus, the seafood counter should be prepared to provide these consumers with the information they need to evaluate the sustainability claims and certifications of the seafood they offer,” the FMI study said.