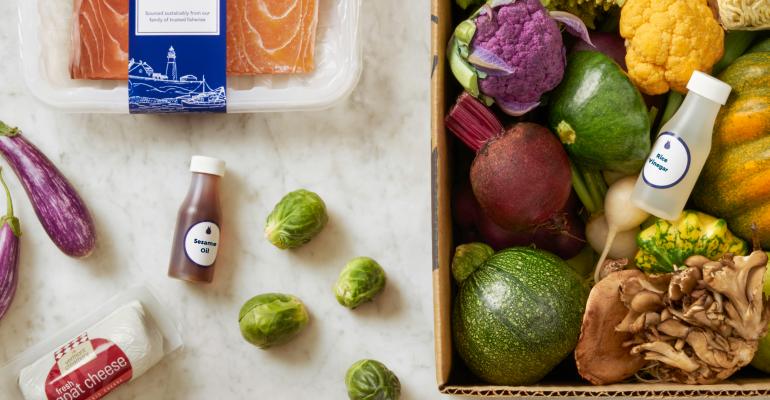 Blue Apron: Major restaurant competitor, or flash in the pan?

The mail order meal prep business has been growing at a rapid rate in recent years. But its ability to compete for business with restaurants will depend on whether the segment can maintain growth without spending ridiculous amounts on marketing.

That, at least, is based on the financials at Blue Apron, the New York-based company that was founded in 2012 and filed for an initial-public offering last week. Blue Apron is a pioneer in the meal prep business, in which customers order meal kits with preportioned ingredients that they prepare at home.

Blue Apron’s growth has been nothing short of explosive that has made the entire meal kit business a potentially serious threat to sales at both restaurants and grocers. The company’s revenues were $795 million in 2016, more than 10 times what they were just two years earlier.

That rate of growth continued in the first three months of 2017: Revenues were $244.8 million, according to SEC documents — up 42 percent over the same period a year ago. Blue Apron will likely finish the year with more than $1 billion in revenue. The company had more than 1 million customers as of March 31.

In the restaurant world, that’s like going from zero to Culver’s in just five years.

Continued expansion at the meal prep business at current rates, even if they inevitably slow down, would make it a major competitor very soon — not just to restaurants, but also to grocers.

Indeed, the research firm Packaged Facts noted that the meal kit delivery market had $1.5 billion in total sales last year, and will mature into a “multi-billion” dollar industry over the next five years.

Yet Blue Apron’s growth has come at a cost, thanks to steep marketing costs. Some analysts question the company’s business model.

For all of that revenue growth, Blue Apron is not profitable. The company lost $54.9 million last year. Already this year, the meal kit company has lost $52.2 million.

Blue Apron is basically spending to generate that revenue growth, hoping that customers will remain customers over the long term while establishing itself as the go-to brand in a new industry.

It’s a strategy similar to what Amazon used 20 years ago. The Internet retailer spent as much as 40 percent of its revenue on marketing in its formative years to build a business, and reduced that percentage over time. It would take years for the company to generate a profit, but it has since become a retailing and technology force.

Blue Apron’s massive growth could give it a foothold in the food market, setting it up as the best known business for people who want freshly prepared meals but don’t want to leave the house.

Yet the company is going to have to learn to live without that marketing spending sooner or later. Once it does, that growth could slow down.

Orders per customer dropped from 4.5 in the first three months of 2016 to 4.1 in the first quarter of this year.

To be sure, other companies have opted for a more profitable, slower-growth business model that’s more sustainable. And Blue Apron has clearly established that large numbers of consumers are willing to pay to have easy-to-prepare meals delivered to the home.

But unless it can maintain some growth with a lot less marketing dollars, it won’t quite be the force some people think it will be.