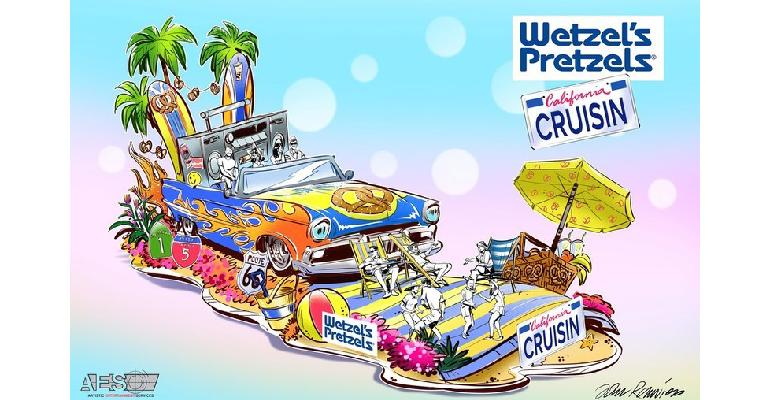 Embodying the Rose Parade's theme of "Dream. Believe. Achieve," the Wetzel's float represents the ideals of the American Dream and how driven individuals can achieve ambitious, life-changing goals.
News>Quick Service

Wetzel's Pretzels is cruisin' into 2022 with Rose Parade® debut

Pasadena-based brand Wetzel's Pretzels (Wetzel's) announced today that it'll be cruisin' into 2022 with its inaugural float entry in the upcoming Rose Parade®. Through its debut, the hometown brand will celebrate its rich heritage while joining a century-old New Year's Day tradition cherished by millions of families worldwide.

The brand's float, California Cruisin,' shares Wetzel's fun, light-hearted spirit and cool, SoCal vibes that inspire its fresh take on soft pretzels. Combining a classic California road trip and beach party, the float features a custom-painted convertible that's cruisin' to the upbeat tunes pulsing from a boom box, with surfboards in tow. Palm trees, "gram-worthy" snacks, and iconic road signs—Route 66 and Pacific Coast Highway's Route 1 among them—round out the scene. Partnering with Artistic Entertainment Services, the masterpiece will be constructed using hundreds of thousands of florals and natural materials in its design.

Embodying the Rose Parade's theme of "Dream. Believe. Achieve," the Wetzel's float represents the ideals of the American Dream and how driven individuals can achieve ambitious, life-changing goals. Starting with a dream of enhancing the snack category in a fresh, fun way, founders Bill Phelps and Rick Wetzel followed their entrepreneurial passion, launching the company in their hometown of Pasadena and opening their first bakery in Redondo Beach in 1994. Success quickly followed, leading to the creation of a fast-growing, in-demand franchise concept.

"As a hometown, Pasadena-based brand, we've watched the parade pass right by our headquarters' office in Old Town. We're thrilled to be a participant this year as the theme "Dream. Believe. Achieve." connects deeply with our mission and is something I find so meaningful and motivating about leading a franchise organization," said Jennifer Schuler, CEO of Wetzel's Pretzels. "We're proud to have established a profitable business model, which enables our franchisees to achieve their dreams of not only building a successful business, but also creating generational wealth for their families. In many cases, our franchisees are first-time business owners or first-generation Americans and when they take a chance on their dreams, they create vibrant local businesses that serve the community with pretzels and create jobs. Our first-ever entry into the Rose Parade® celebrates this dream coming full circle, from its humble beginnings here in Pasadena where our founders started that dream, to a national brand that supports hundreds of entrepreneurs achieving their dreams of business ownership."

In appreciation of the many individuals who contribute to the continued success of Wetzel's Pretzels, the float will feature front-line crew members, general managers, franchise partners and support staff from around the world, along with its founders who started it all.

Celebrating its parade debut, Wetzel's plans to share bitz of joy with its fans. Starting December 20th, guests who enter code "PARADE" in the Wetzel's app will receive a free pretzel reward to be redeemed in the New Year and will be entered for a chance to win exclusive Wetzel's Rose Parade® merch and free pretzels for a year. Leading up to the main event, Wetzel's brand ambassadors will also be delighting paradegoers with delicious pretzels and custom swag.

Just as the brand delivers handheld happiness to its guests, it aims to spark joy and deliver smiles with paradegoers and television viewers when the rose-adorned float rolls down Colorado Boulevard, only a few steps away from Wetzel's corporate headquarters.

"At Wetzel's, we strive to be that delightful moment in someone's day, giving them the opportunity to relax, recharge and connect with others while enjoying a scratch-made pretzel straight from the oven," said Kim Freer, Chief Marketing Officer of Wetzel's Pretzels. "As we turn the calendar page, it seems fitting that California Cruisin' provides a welcome reminder that it's not about the destination, but rather, enjoying the journey."

About Wetzel's Pretzels
Providing a fun, fresh take on soft pretzels, Wetzel's Pretzels was founded in 1994 by Bill Phelps and Rick Wetzel. Drawing fans to its mouth-watering, portable snacks that are hand-rolled, baked fresh and served hot from the oven, word quickly spread about the delicious West Coast brand. Today, Wetzel's Pretzels has grown to more than 340 bakeries, including premier locations like Disney Springs® at Walt Disney World® Resort, Downtown Disney® District at Disneyland® Resort and Universal CityWalk,™ continuing to cultivate fanatics around the world with its SoCal vibes and "gram-worthy" snacks. It's cult-like following includes famous fans like Ben Affleck, Billie Eilish, Jimmy Kimmel and Kim Kardashian. As the nation's leading pretzel chain, the franchise has received numerous accolades, most recently being named to the 2021 Top Food Franchises and the Culture100 by Franchise Business Review. To learn more about franchise opportunities, visit WetzelsFranchising.com.

About the Pasadena Tournament of Roses® and The Rose Parade® presented by Honda
The Tournament of Roses is a volunteer organization that hosts America's New Year Celebration® with the Rose Parade® presented by Honda, the Rose Bowl Game® and a variety of accompanying events. The Association's 935 volunteer members supply more than 80,000 hours of manpower, which will drive the success of 133rd Rose Parade, themed "Dream. Believe. Achieve.," on Saturday, January 1, 2022, followed by the 108th Rose Bowl Game. For more information, visit www.tournamentofroses.com. Like us on Facebook and follow us on Twitter, Instagram and YouTube.