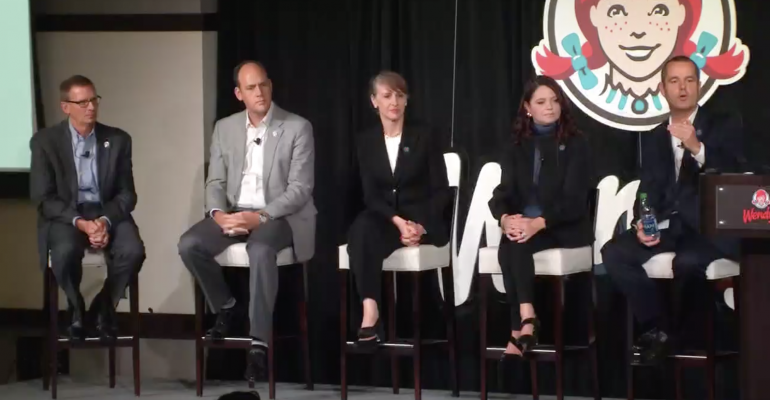 Wendy’s will roll out breakfast in 1st quarter 2020

New daypart expected to grow to 10% of sales, executives say at Investor Day

The Wendy’s Co. will debut its new breakfast daypart nationwide in the first quarter of 2020 and expects the new daypart eventually to contribute a 10% growth in sales, executives said Friday.

The Dublin, Ohio-based burger brand, which hosted an Investor Day on Friday, said the new breakfast platform, which has been tested in 300 stores from 6:30 a.m. to 10:30 a.m., is expected to contribute 6% to 8% of sales in the partial 2020 fiscal year and has been tailored, with help from franchisees, to simplify operations.

Kurt Kane, Wendy’s president for the U.S. division, said the brand was “going big in breakfast and really delivering against a long-standing opportunity for the Wendy’s business and doing it right.” In 2020, Wendy’s expects breakfast sales to be $600 million to $800 million, according to Gunther Plosch, the company chief financial officer.

Kane said breakfast is providing organic traffic growth in the quick-service segment and Wendy’s cannot “continue to sit on the sidelines.”

He said the company worked with franchisees to build the new breakfast platform, making it operationally simple, limiting it to 18 unique stock keeping units rather than the as many as 45 in earlier tests, requiring no new equipment rather than $10,000 in earlier versions, focusing it on the pick-up window, requiring staffing of three workers rather than four or more and supporting it with national marketing for incremental media.

Wendy’s is also layering in an improved coffee platform that includes cold “Frosty-ccinos” in vanilla and chocolate. “It’s based off a new iced coffee blend,” Kane said, and that will be expanded to other dayparts.

The company is investing $20 million in 2019 to get the daypart started in 2020, Kane added, and also invested in new small wares for franchisee restaurants.

In test restaurants, the breakfast daypart has not cannibalized other customer occasions, Kane said, “so we believe this is incremental to our business overall.”

Todd Penegor, Wendy’s president and CEO, added that Wendy’s, which has done isolated tests of the morning menu before, is “committed to the breakfast line. We are in this for the long run.”

In other topics from the wide-ranging Investor Day, Wendy’s addressed:

- Alternative proteins. Wendy’s is currently in final testing of a black bean burger. The product, if approved, could be on menus by early next year, Kane said.

- Value meal bundles. Kane said the 4 for $4 and Biggie Bag promotions have driven engagement, with the 4 for $4 customer visiting a Wendy’s twice as often as a typical consumer.

- Third-party delivery. Laura Titas, Wendy’s chief digital experience officer, said the company would be expanding its third-party delivery beyond DoorDash, which the company has worked with since December 2017, to Grubhub and Uber Eats. Delivery orders will also interface directly through Wendy’s point-of-sale system.

- Points-based loyalty program. Titas said Wendy’s will be introducing a loyalty platform in 2020, and that it will be based on accrued points. The company will be also layering in geolocated messages and breakfast reminders into its app.

- Dark kitchens. In the biggest U.S. cities, Wendy’s is underpenetrated, said Abigail Pringle, Wendy’s chief development officer and president of international, which includes Canada. “We believe urban cities are places where folks are going to work, live and play in the future,” Pringle said. “And we want to be there.” As a result, Wendy’s is evolving its business model to allow for kiosks and cloud kitchens, which would be solely for delivery. “We believe this is an important unlock to our growth going forward,” she said. Two “dark kitchens” will be open before the end of the year, Pringle said.

- New York restaurants. Pringle said the company is looking to refranchise the New York area market. Wendy’s expects the exit from that market to cost the company $5 million to $10 million in 2020, Plosch said.

- International growth. Pringle said Wendy’s currently has about 950 restaurants abroad in 32 countries, including Canada, with more than $1 billion in sales. The company is looking to double that with an entry first into the United Kingdom, where it pulled its brand in 2000, and then more generally Europe. Currently, Wendy’s units are 40% in Canada, 35% in Latin America and 25% in the Asia Pacific-Middle East region. By 2024, she said Wendy’s expects to double international sales to $2 billion.