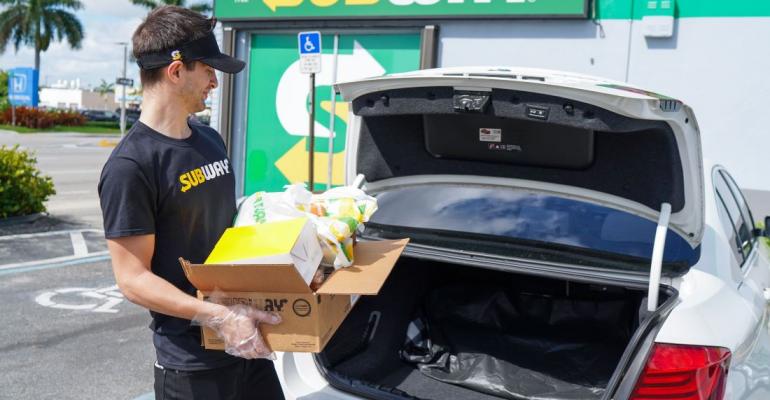 Nancy Luna
More than 100 Subway restaurants in Southern California are selling menu items as groceries for the public.
News>Quick Service

More than 100 Subway restaurants in Southern California are turning into makeshift grocery stores, selling restaurant ingredients such as bagged lettuce and frozen soups to consumers looking for a safe and fast way to obtain groceries without entering a supermarket.

Dubbed Subway Grocery, the beta program allows customers to buy online items such as baked bread, deli meats, sliced cheese, vegetables and soups. Curbside pick up orders can be ready in an hour at some locations. Delivery orders, available in half of the locations, are made the same day usually within two to three hours.

It’s unclear if the Milford, Conn.-based company plans to expand the test nationwide. Subway, which recently laid off 300 corporate workers, has nearly 24,800 restaurants in the U.S.

Grewal, a veteran development agent for the sandwich chain, started the Subway Grocery program about 10 days ago at a handful of stores in Orange County.

The idea was to give consumers a safe and fast way to obtain certain groceries, while also allowing franchisees to supplement off-premise orders. In locations that do delivery, it also allows restaurants to keep more employees on staff.

Deliveries are free within 5 miles of a store for orders totalling $45 or more.  Prices vary as some items are sold in bulk or as individual items. Footlong breads cost $1.50 each, while a pack of 150 slices of pre-cooked bacon cost $35.75. A three pound pack of sliced Black Forest Ham cost $18.40. You can even buy whole egg patties used in breakfast sandwiches. Cost: $9.98 for a dozen whole egg or egg white patties.

Stores are only selling deli items. Supplies such as toilet paper are not being sold. 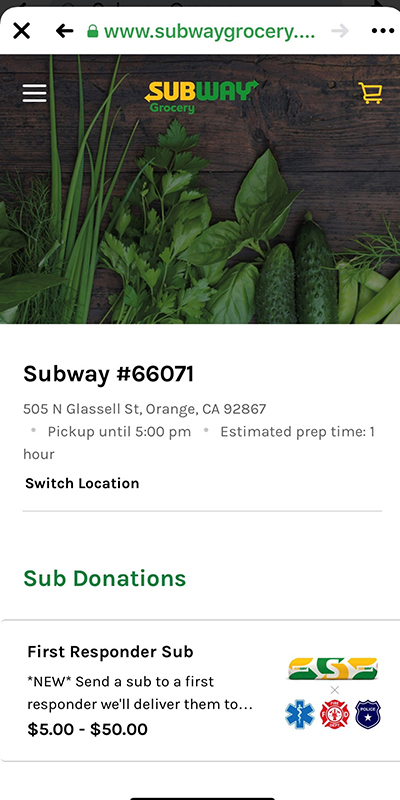 Grewal, whose company is based in Irvine, Calif., said customers are “extremely thankful that they are able to get fresh food either picked up or delivered to their home.”

By Friday, he expects about 500 restaurants in Southern California to come online.

“It’s getting bigger and bigger,” he said.

All five of his Subway stores are participating in the grocery experiment. He said offering groceries helps “on all fronts” as it allows him to supplement his income, while also giving customers the ability to buy items in a timely manner.

Consumers can also give back to front line workers while making orders. The Subway Grocery menu features a “First Responder Subs”
program (#sendsubs), allowing consumers to donate sandwiches with their grocery orders or as standalone donations.

Local Southern California Subway restaurants will then deliver donated subs to local doctors, nurses, police, fire, and emergency medical workers daily to say “thank you” for serving us on the frontlines, Subway said in a statement.

“In today’s environment, everything is upside down. This creates a sense of community and a sense of hope for everybody,” Riscalla said.

Subway is the not the first restaurant chain to sell directly to the public from its supply chain. Many independent restaurants have been selling everything from fresh seafood to toilet paper. But Subway is one of the first large scale national chains to experiment with an online grocery program. This week, Potbelly launched Potbelly Pantry, a similiar program where customeres can order Potbelly ingredients and sides for delivery or curbside pickup at participating restaurants.