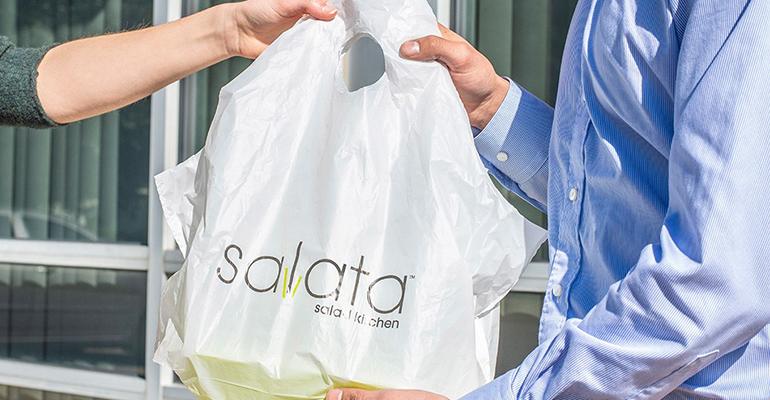 Welcome to the takeout nation.

With government officials urging restaurants to shut down or move to off-premise only services to slow the spread of coronavirus, dozens of quick-service and fast-casual chains across the U.S. are complying by pivoting to carryout, drive-thru and delivery-only services including Taco Bell, Chick-fil-A, Panda Express, Jack in the Box, Chipotle Mexican Grill, Pizza Hut, Starbucks, Arby's, Sonic, Chick-fil-A, Shake Shack and Noodles & Company.

Related: In response to coronavirus, Starbucks moves to a to-go model to help create social distancing

Late Friday, New York City Mayor Bill de Blasio said the city’s restaurants will only be able to serve food through takeout and delivery starting March 17. Other jurisdictions across the U.S., including Los Angeles, Rhode Island, Ohio and Illinois, have imposed similar restrictions, forcing dozens of restaurants to rethink their business models and drastically cut staffing. In states with evidence of community spread, the Trump administration said Monday it is recommending that bars, restaurants and food courts, where groups of people congregate, should close.

One of the first chain's to pivot was Starbucks. On Sunday, the Seattle-based coffee giant moved to a to-go only business model.

Related: Here’s what restaurants are doing to stop the spread of coronavirus, from going cashless to expanding delivery to spacing out tables

“As of March 15, all company-owned Taco Bell restaurants are operating drive-thru and delivery only. Franchisees are determining dining room closures based on local mandates and community needs,” parent company Yum Brands announced Monday.

“KFC franchisees are determining lobby closures based on the guidance from their local authorities and local community needs,” Yum Brands said.

Where carryout is available, KFC guests can order online and pick up at the restaurant from a designated area at the front counter. Systemwide, the chain is also offering free delivery through its own channels, and through Grubhub and Seamless.

Chick-fil-A, Jack in the Box, Panda Express, Dunkin', Just Salad and Shake Shack also announced plans to go with to-go models. Inspire Brands said it is temporarily closing "dining rooms and moving all of our company-owned Arby’s, Jimmy John’s and Sonic restaurants to a “to-go only” model."

Panda Express, which has some drive-thru locations, said all 2,200 units nationwide will be transitioning to off-premise services. Dining rooms will be closed, but "in some locations, guests may still enter the restaurant to place a take-out order," the company announced Monday.

"As the circumstances around COVID-19 continue to change, Panda Express is prepared to act swiftly to change restaurant operations, reduce operating hours, or temporarily close stores if required," the company said.

Jack in the Box made its announcement in a tweet Monday afternoon: "Due to the health & safety of our customers, employees, and communities being our #1 concern, we will be temporarily closing all of our Jack in the Box dining-room services, effective today, until further notice. We will continue to provide drive-thru & mobile-delivery service."

Dunkin’ Brands CEO David Hoffmann sent an email blast to consumers late Monday stating that U.S. restaurants will have reduced hours. Consumers can make mobile orders, and order through the brand's more than 5,300 drive-thru locations. "All seating and tables will be removed from the dining and patio areas," Hoffman said.

“We’re committed to doing our part as a company to play a proactive role in protecting our communities,” Garutti said in a statement. “When the time comes to re-open our dining rooms as the community gathering place we were born to be, our teams will be ready. Until, then we are thankful for the privilege to serve our guests safely.”

Noodles & Company is switching temporarily to pick-up/carryout and delivery only services. Unlike Starbucks, which is allowing carryout orders to be made at the register, Noodles is closing in-restaurant dining areas effective March 17.

No orders can be made at the counter. The company is also reducing operating hours by closing more than 450 restaurants at 8 p.m. every day.

“During this uncertain and difficult time, it’s our honor and privilege to continue serving our guests,” CEO Dave Boennighausen said in a statement. “Our guests can trust that we have taken every measure possible to protect them throughout this unprecedented situation. There is no greater priority than the safety and wellbeing of our guests and team members, and with this operational change, our focus remains on safely preparing every single guest’s order.”

Other chains moving to off-premise only operations include MOD Pizza and Zoës Kitchen.

In fact, Zoës Kitchen said “the use of tables, chairs, booths, and patio areas will not be permitted.”

In the speech, the CEO said the Chicago-based chain will do whatever it takes to make “safe and caring decisions.”

However, he did not directly discuss the possibility of closing dining rooms at the chain’s 14,000 restaurants in the U.S.

“We’re going to do whatever is necessary to help every owner operator and partner survive this crisis. We will not let you fail,” he said. (After a White House press conference, McDonald's Corp. issued a statement, stating company stores would close dining rooms.)

Some chains like Chipotle Mexican Grill said they would only be closing dining rooms in “jurisdictions that have restrictions for in-restaurant dining.”

Last week, the Newport Beach, Calif.-based fast-casual chain was one of the first to anticipate a surge in delivery and began offering free delivery through the end of March for orders made through its digital channels.

Smaller operators have been nimble.

Andrew Gruel, who owns the 25-unit Slapfish fast-casual chain, said he’s been operating a to-go model at his Orange County, Calif., restaurants for several days. Since last week, those stores have seen deliveries increase by more than 30%.

Still, so much is unknown, and restaurants in each state face different situations, he said. As of Sunday, his newly opened Hilton Head, S.C., restaurant was operating normal hours with plenty of dine-in crowds.

But he understands that might change any minute, especially if government officials order a curfew or a complete shutdown of restaurants.

“We’re taking it one hour at time,” he said.

Experts say quick-service chains, especially those like McDonald’s and Taco Bell, will likely fare better under a new normal of takeout only because their operations are set up to accommodate business through off-premise channels.

Most quick-service chains generate 65% to 75% of sales through drive-thru lanes.

“I don't expect independent operators to open their doors anymore, unless they can pivot to carryout and delivery only,” said industry consultant Tim Powell of Foodservice IP in Chicago. “I expect ghost kitchens and cloud kitchens to receive the brunt of it right now.”

Though quick-service and fast-casual restaurants are set up for takeout and delivery, Powell said there’s some concern if employees are being sent home.

Gruel said, so far, he’s not had to send anyone home because they are sick. But he is having to make the tough choice of limiting hours for employees by rationing shifts. An employee that normally works about 40 hours a week is getting about 10 hours, he said.

Losing dine-in customers and reducing employee shifts will have a ripple effect on stores and the 12 million foodservice workers in the U.S., industry leaders and economic experts say.

Raymond Sfeir, professor of economics and management science at Chapman University in Southern California, said corporate food giants like McDonald’s will survive because their operations are designed for off-premise, plus they have cash flow to handle lost revenue during a crisis.

“Small restaurants don’t have that option,” he said.

Sfeir said foodservice employees who are furloughed or losing shifts are going to struggle to pay for basics like rent and utilities. And, it will get worse if the government forces a shutdown of restaurants completely, he said.

That will make it tough for workers and restaurants.

“If you’re not generating income, how will [restaurants] pay their rent. Some may not survive if it gets worse and if there’s a quarantine.”

Updated: This story will be updated frequently as NRN learns of more restaurants changing operations.