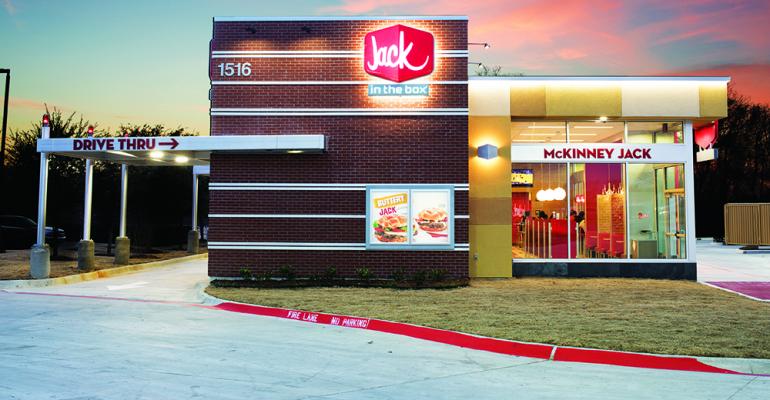 With a sale off table, Jack in the Box turns to improving business

After taking a six-month strategic look at options for the company and deciding against a sale, Jack in the Box Inc. is now focusing on improving the burger brand’s business, executives said Thursday.

“One of the silver linings of just spending that much time on our business, evaluating our business in conjunction with other folks who are looking at it, is you start to find opportunities through other people's lenses,” Lenny Comma, Jack in the Box CEO and chairman, said in a second-quarter earnings call with investors Thursday.

The “rigorous” process led Comma and the Jack in the Box team to evaluate the brand’s operations and value messaging for the rest of the year, the CEO said.

In deciding to take a potential sale off the table, an option it began looking at in December, the San Diego-based quick-service burger brand announced Wednesday that it would implement “a new capital structure in the form of a securitization [as] the best alternative for driving shareholder value at this time.”

Meanwhile, Comma said Jack in the Box’s operations team would be addressing issues around speed of service and training.

“We've been our own worst enemy when it comes to speed of service as the breadth of our ever-changing menu has added complexity and prep times in our kitchen,” he said. “To reduce this complexity while also improving consistency and accuracy, we've been testing opportunities to reduce redundant SKUs and to release some low-volume items while also streamlining back-of-the-house procedures.”

The first phase of that initiative has been tested in about 180 company and franchised restaurants, Comma said, “with no detrimental impact on sales.”

Jack in the Box is targeting, by the end of 2021, a one-minute improvement in average service times while maintaining quality, accuracy and friendliness ratings.

The company is also scaling back its remodeling program, which involved about 600 of the brand’s oldest restaurants. Comma said about 150 of those involved structural enhancements, and about 75 have been completed.

“We’ll complete the balance of those remodels,” he said, “However we decided to no longer require full remodels for the remaining 450 or so restaurants.”

The company saw most of the returns from the drive-thru, where the brand sees about 70% of its sales, Comma said.

“We're reprioritizing our spending and shifting our focus to our Drive-Thru of the Future initiatives in an effort to get most of the sales lift for a smaller investment,” he said. “We're expanding the test that's been underway, which includes amenities like digital menu boards and increased use of LED lighting and canopies.”

Comma added that he was “hard-pressed” to ask franchisees to make investments where they wouldn’t drive the highest returns.

The CEO said the company is also intent on driving value messages with two combination meals under $5, one featuring a Sourdough Patty Melt Sandwich and the other a fish sandwich.

“Discounting is still pervasive in the marketplace,” Comma said, “and we leveraged a slightly different approach to value and saw a sequential increase in both sales and transactions without negatively impacting restaurant-level margins.”

He said Jack in the Box’s value messaging “differs from the deep discounting tactics of some of our competitors, which we believe is not in the best interest of the long-term health of our brand, particularly in the face of rising labor and commodity costs.”

Same-store sales in the quarter increased 0.2% systemwide, rising 0.6% at company-owned units and 0.1% at franchised restaurants.

Some franchise owners had organized earlier this year as the National Jack in the Box Franchisee Association after expressing frustration with corporate leaders.

“At the end of the day,” Comma said on Thursday’s call, “we want to work hand-in-hand with those franchisees to try to resolve those disagreements and to be able to get in a line and really move forward together.”

If it gets to an impasse with individual operators, he added, “we would certainly be willing to take a look at either buying back that business or helping them facilitate to sell that business to another operator.”

Jack in the Box operates and franchises more than 2,200 restaurants in 21 states and Guam.