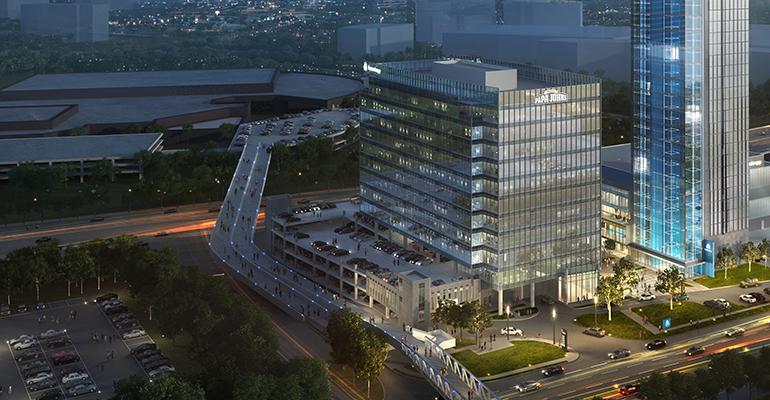 Papa John’s is adding a second 60,000 square-foot headquarters in Three Ballpark Center at The Battery Atlanta

The 60,000-square-foot headquarters will include a state-of-the art test kitchen and signal a new era of menu innovation and “optimized integration” across the Louisville, Ky.-based pizza chain’s marketing, communications, customer experience, diversity, communications, and investor relations branches. Papa John’s IT, supply chain, and legal teams will still be housed in Louisville.

When the new headquarters was initially announced, the company said that it signified a “broader reorganization of corporate functions” as the company “enters an era of long-term growth.”

With the opening of the new headquarters by summer 2021, Papa John’s plans to add 200 jobs in both the Atlanta and Louisville headquarters.

"Our new Atlanta headquarters is the outcome of a process we began in late 2019 as an investment in our long-term growth and delivers on our purpose, values, and strategic business priorities,” Rob Lynch, president and CEO of Papa John's, said in a statement. “We're excited to expand in Atlanta: a vibrant city that’s home to several QSR brands and provides incredible access to a deep, diverse talent pool."

The company is planning to spend time in Atlanta preparing for the transition to the new headquarters and will be recruiting for a number of positions from local Atlanta talent.

“Papa John’s chose metro Atlanta for their new headquarters due to the energetic and diverse community, world-class innovation, deep talent pool and accessibility through the world-class airport,” Marvin Boakye, chief people & diversity officer at Papa John's, said in a statement. “We’re thrilled to open this office and look forward to growing our existing teams and embracing the local community.”

As of Sept. 27, there were 5,360 Papa John’s restaurants operating in 48 countries and territories globally.