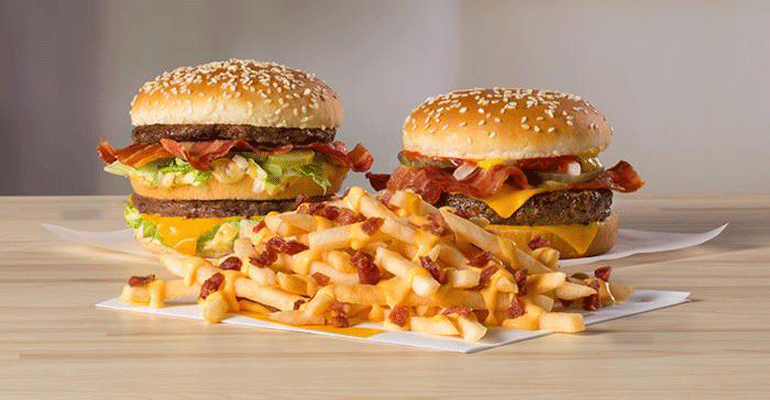 Customers get free side of bacon during one-day event

McDonald’s is luring customers with one of America’s favorite foods: bacon.

On Jan. 29, participating restaurants nationwide will be giving away bacon during “McDonald’s Bacon Hour.” On that day, from 4 p.m. to 5 p.m. local time, customers can receive two half pieces of Applewood smoked bacon on the side for any order. The free add-on is available for one order per customer.

Typically, bacon can be added to a sandwich is available for an additional cost. At one Southern California McDonald’s store listed on Uber Eats, for example, it was $1.50.

McDonald’s is betting a lot on bacon these days as it looks to boost traffic.

The free-bacon hour comes the day before another big bacon promotion. Starting Jan. 30, McDonald’s is introducing the Big Mac Bacon, priced from $5.19 to $5.39, and the Quarter Pounder Cheese with bacon, priced from $5.29 to $5.49, to the menu. The chain will also launch an entirely new menu item, Cheesy Bacon Fries, priced from $3.15 to $3.45, that same day.

Tim Powell, a senior restaurant analyst at Q1 Consulting in Chicago, said the bacon blitz by McDonald’s is clearly a “ploy” to drive foot traffic to stores.

“They have looked to Taco Bell for these techniques,” he said. “McDonald’s has been more obvious with its ‘me too’ strategy with the never-frozen burger and all-day breakfast. We will see how franchisees handle this though.”

In other McDonald’s news, the company confirmed that going forward it plans to allow franchisees more flexibility when it comes to media buys.

McDonald’s said: “We continue to work closely with our franchisees and this effort is simply about offering additional local media buying flexibility to them so they may support their business and connect with customers as they see best.”

Having local control, especially when it comes to menu pricing, has been one of several issues brought up by the newly formed National Owners Association. The self-funded group formed in the fall, and has held two members-only meetings. Group leaders have declined repeatedly to talk to the media.