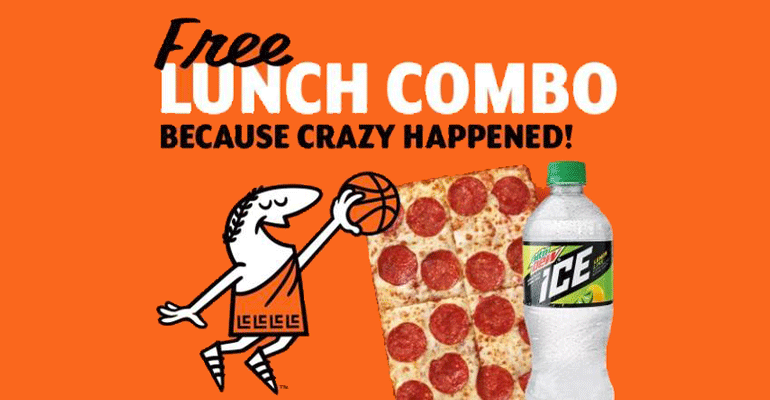 The Detroit, Mich.-based Little Caesars offered a free $5 “Hot-N-Ready” lunch combo if a No. 16-seed team were to upset a No. 1-seed team during the NCAA’s annual March Madness college basketball tournament.

Because "CRAZY HAPPENED" with a #16 beating a #1 (!!!!), everyone in America gets a free #LittleCaesars Lunch Combo on Monday, April 2nd.

“Amazingly, this unprecedented event occurred when the University of Maryland Baltimore County beat the University of Virginia,” said Eli Portnoy, CEO and co-founder of Los Angeles-based Sense 360, which aggregates anonymous data from more than 100 million yearly restaurant visits and more than 300,000 yearly survey responses. The data is gathered daily.

Little Caesars made good on its promise, offering the free pizza combos to anyone visiting between 11:30 a.m. and 1 p.m. on April 2.

“This huge promotion caused their Brand Draw to spike from 5 percent over the past 365 days all the way to 11 percent during this promotion, which would place them in our Top 10 for that day,” Portnoy said.

Portnoy said Sense360’s “Brand Draw” metric looks at the percent of market share that a brand attracts within half a mile of each of locations.

“This metric normalizes the playing field for a brand with 400 locations vs 4,000 locations,” he said, “as it just looks determines how often guests choose a brand versus all other competitors when they are within striking distance.”

According to Sense360 data, the traffic lift was substantial.

Little Caesars has more than 4,300 restaurants in the United States and its territories. The company did not respond to requests for comment on the promotion.

For the month of March, Sense360 said the top Brand Draw restaurants were led by McDonald’s and followed by Chick-fil-A, In-N-Out Burger, Culver’s and Whataburger.

Correction April 20, 2018 This story has been updated to correct the number of yearly restaurant visits included in Sense360's data.