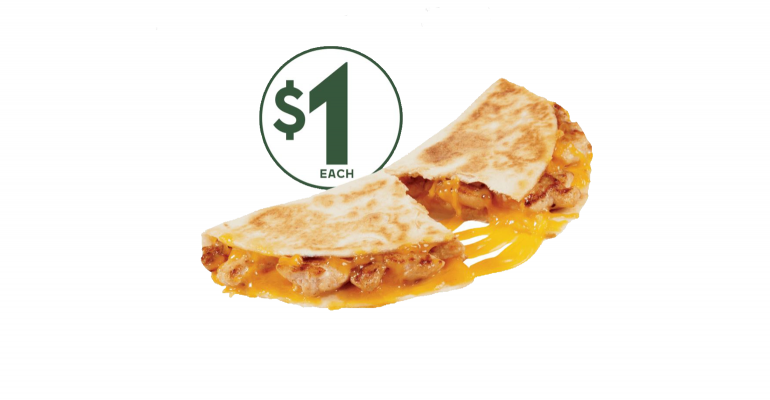 Marketing to pivot towards premium items to raise check averages

Del Taco’s new Chicken Quesadilla Snacker was a record-breaking new item on the Buck and Under Menu during the second quarter. But the dollar item also put a dent in overall results for the quarter.

“We view this as a high-class problem,” CEO John D. Cappasola Jr. told investors during a Thursday afternoon conference call.

The Lake Forest, Calif.-based Mexican quick-service chain reported a 3.3 percent increase in systemwide same store sales, marking the chain’s 19th consecutive quarter of gains. But it was slightly lower than the first quarter, in which systemwide same-store sales grew 3.7 percent during.

Cappasola Jr. said the Snacker will remain on the menu, but going forward Del Taco will pivot its marketing to showcase mid-tier and premium items.

In the coming weeks, Del Taco plans to bring back a combo meal deal that saw success earlier this year: Mix and Match 2 for $5 Classic Burritos. The company plans to introduce a new Epic burrito, and bring back shredded beef as an LTO protein with a better flavor profile, the CEO said.

As the company looks ahead, Cappasola Jr. said Del Taco will continue to celebrate its fresh-prep strategy, which showcases the company’s longstanding tradition of making foods from scratch in each store.

Improving hospitality is also a key focus, he said. In the drive-through, workers now introduce themselves by name. In the restaurant, customer names are called out when their food is ready, instead of calling out a number.

“Our goal is to make hospitality and service another point of differentiation for the brand,” Cappasola Jr. said.

Total revenue for the quarter increased 8.5 percent to $117.8 million. The company closed two restaurants, and opened two during quarter bringing its total store count to 566. By the end of the year, Del Taco is expected to open 25-28 units.