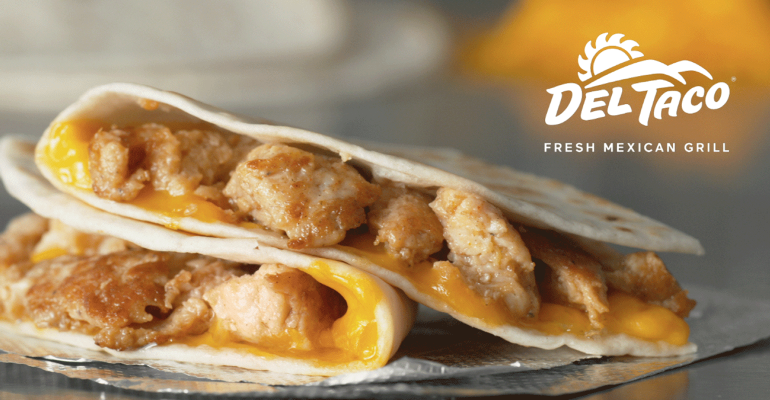 Signs point to yes. The Lake Forest, Calif.-based chain is adding “Fresh Mexican Grill” as a tagline for the brand. The new marketing will appear on packaging including cups, takeout bags and tray liners.

Chief Marketing Officer M. Barry Westrum said the fresh-Mex branding is part of the chain’s five-year-old plan to reposition Del Taco as a “QSR-plus” chain with its value oriented made-to-order Mexican food menu. In that sense, Del Taco’s game plan is to have a foot in both worlds —  offering the value of a Taco Bell, and the fresh approach of a Chipotle, officials said.

“People want the quality of fast casual, but they want the affordability of QSR and that’s where we’ve been playing,” Westrum told Nation’s Restaurant News in a phone interview.

The marketing push includes other consumer-facing and back of the house initiatives, including new uniforms for employees, revamped menu boards and new quesadilla equipment.

“We’re further leaning into what enables this brand to continue to differentiate itself from Taco Bell and Chipotle,” Westrum said in a statement.

Over the last two weeks, Del Taco’s more than 560 restaurants in 14 states have been outfitted with equipment that will result in a “more caramelized” quesadilla exterior, a preferred preparation for customers, Westrum said.

“The quesadilla line has been a hero of our stores for decades,” he said. “They [guests] want crispy caramelized tortillas on the outside.”

To celebrate the new quesadilla prep, Del Taco added the Chicken Quesadilla Snacker to its Buck and Under Menu.

“The $1 Chicken Quesadilla Snacker is a perfect example of our barbell menu strategy, which highlights ingredients that are prepped fresh across our entire menu, from value to premium. It’s a Del Taco differentiator,” Westrum said in a statement.

Employees are also going to play a key role in Del Taco’s new marketing plan. Workers will sport new uniforms that emphasize they chop, dice, shred and grill throughout the day, Westrum said.

Crew members are also going to focus more on hospitality initiatives, including calling out guest orders by name instead of by order number.

John Cappasola Jr., CEO since last summer, said the fresh-Mex messaging allows Del Taco “to put a finer point on the fresh prep and quality of our food.”

“It will work hand in hand with our advertising and new products to further embed the plus piece of our value oriented QSR-plus position,” he said.

As the company expands to new markets, Westrum said the “fresh Mexican” messages are “helpful to our lighter and medium users” who aren’t aware that Del Taco serves foods made with fresh, house-made ingredients.

“Those words really summarize the brand nicely to those who might not have grown up with us,” he said.

Whether the changes will resonate with the brand’s heavy users remains to be seen, analysts say.

"I applaud their efforts to enhance the hospitality experience. These are the cornerstones of success," said Tim Powell, a senior restaurant analyst at Q1 Consulting in Chicago. "The other changes such as its tagline, focus on freshness and crew uniforms are probably going to fall on deaf ears with its most loyal customers."

For the first quarter ended March 27, Del Taco reported a 3.7 percent increase in systemwide same-store sales. It was the 18th consecutive quarter of gains for quick-service Mexican chain.