Michael Loccisano/Getty Images News/Getty Images Plus
Same-store sales for the industry dropped more than 65% during the last two weeks of the month.
News>Quick Service

The rapid decline in restaurant sales during the second half of March due to the COVID-19 pandemic was enough to push the industry down to its worst month in decades. Same-store sales for restaurants dropped 28.3% in March. This update comes from Black Box Intelligence (formerly TDn2K) data from over 50,000 restaurants and $75 billion in annual sales.

The 28.3% decline does not show the full impact the virus outbreak is having on restaurants. Same-store sales for the industry dropped more than 65% during the last two weeks of the month.

“We have reported on restaurant sales and traffic since the last Great Recession, and this is something far beyond anything the industry has experienced,” said Victor Fernandez, vice president of insights and knowledge for Black Box Intelligence. “Although it is hard to classify anything as good news right now, there is a positive in the sense that the decline in sales may have reached bottom based on early April data. As more restaurants focus their undivided attention on their off-premise offerings and guests adapt their consumption to this new environment, plus some of the government relief measures take effect, some small improvements may lie ahead.” 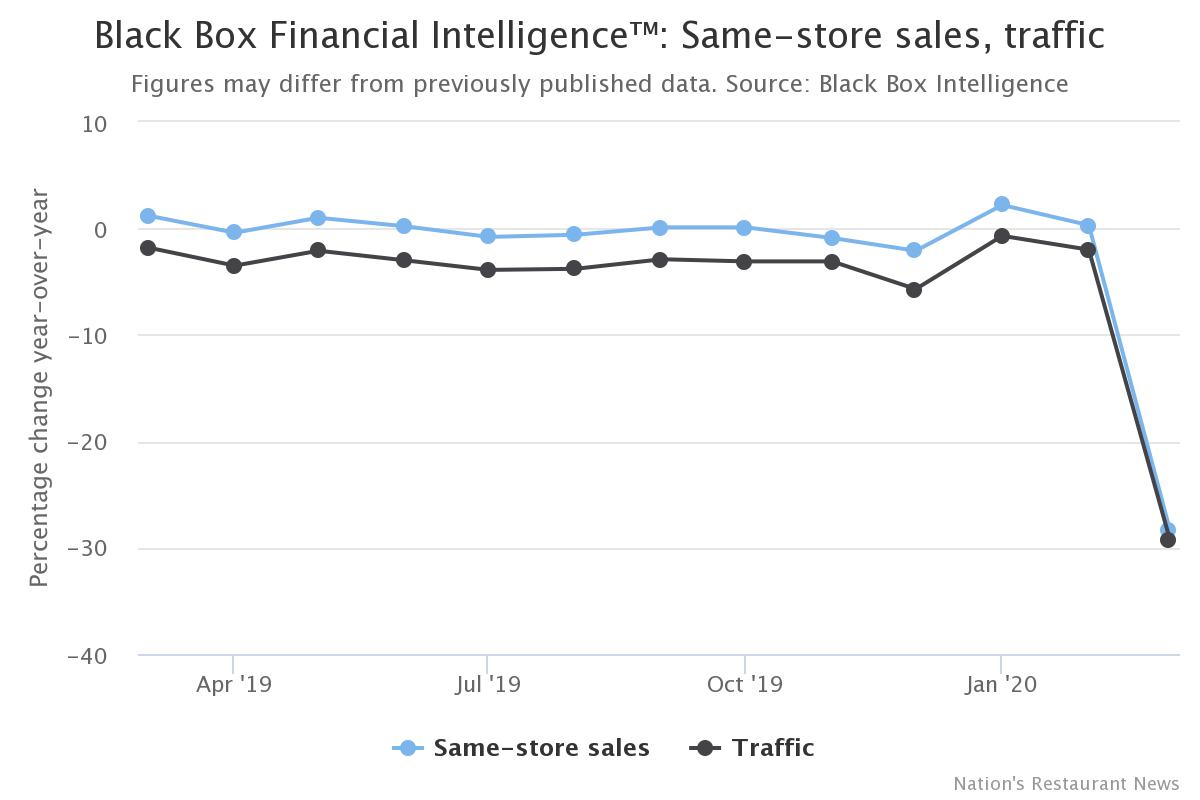 Same-store traffic fell by 29.2% in March. As with sales, it was not until the last two weeks of the month that traffic was severely impacted by the measures imposed to try to slow down the COVID-19 spread. As normal routines for work, school and other activities were disrupted by people sheltering at home, restaurant guest counts fell close to 70% in comparable stores during the end of March.

The real story there was the widening check growth dynamics between segments. Limited-service restaurants had a sharp acceleration in their guest check growth, as consumers likely shifted to larger off-premise orders to feed multiple people at home.

Meanwhile, guest checks dropped considerably for full-service restaurants, fueled in large part by beverage sales being almost completely eliminated by the shift to off-premise only operations. Alcoholic beverages, in particular, can have an enormous impact on guest checks, especially for bar and grill and more upscale restaurants.

Fine dining and upscale casual were the worst performing segments during March based on same-store sales growth. Family dining, which includes many buffet concepts, was another segment that was hit hard.

With restaurant operations shifting to off-premise sales only, concepts that were developed with off-premise as an essential part of their business are naturally faring much better. Quick service and fast casual were the best performing segments based on sales growth during March. While full-service restaurants were experiencing same-store declines of more than 70% year over year by the last week of the month, fast casual’s decline was about 50% and quick service lost only about 30% of its sales during the week.

The sharp decline in sales reached all restaurant dayparts as regular daily routines were upended by social distancing guidelines. As the pandemic effects started to hit the entire country late in March, it seemed that breakfast and mid-afternoon sales were holding up better than the rest. However, by the last week of the month, breakfast sales growth fell in line with the declines being reported for the lunch and dinner dayparts.

Mid-afternoon sales remained the best performing daypart based on same-store sales growth by the end of the month, while late-night were the most negatively affected since early in the crisis.

By the last week of the month, the regions experiencing the worst declines in restaurant sales were those where the biggest COVID-19 outbreaks have occurred, as well as regions with large metropolitan areas of high population density. Same-store sales dropped by more than 70% for New England, the Western region, New York and New Jersey, the Mid-Atlantic and California during the last week of March.

However, performance was not much better for the rest of the country during the final week of the month. In fact, the Southeast was the only region that experienced less than 60% decline in restaurant sales year over year.

Recovery for the economy could be slow after strong initial rebound

From a macro economic standpoint, there are two major questions facing restaurants: When will the economy start to reopen, and what will the recovery look like? “The answer to the first question is unknown,” commented Joel Naroff, president of Naroff Economic Advisors and a Black Box Intelligence economist. “As for the second, it is critical to understand that the programs put in place are stabilization plans not stimulus plans. You have to stop falling before you can start rising again. When the opening does occur, the early phase should be very strong. Given the massive number of business closures, their reopening will create a huge rise in activity. Also, households will have to restock, creating a temporary surge in consumer demand.

“But that could be a head fake. We need to look not at the first few months after reopening but the following six to twelve. That is when economic fundamentals take over. With so much damage to so many companies, it is likely that even with government financial support, many will fail, slowing activity. In addition, it is unclear how consumers will behave. The unemployment rate could hit 20% and it might take years to get back to a more normal level. After the initial surge, it may be months before a sustained consumer spending pattern emerges. A second, short down phase could take hold. At that point, we would likely enter the true recovery. Given all that happened, growth at moderate rates, similar to the recovery period in the 2010s, should be expected.”

After years of strong job growth for the restaurant industry, the sharp downturn in sales has meant many companies have had to downsize their staff. A survey by Black Box Intelligence conducted in early April revealed that 22% of participating restaurant companies had to lay off employees, while the percentage that said they had to place some employees on furlough was 67%

As restaurants try to figure out how to navigate this challenge, keeping employees and guests safe and taken care of has been one of the areas of focus. Many companies already had paid sick leave policies before COVID-19, but many more implemented them quickly in response. Currently, 67% of restaurants said they offer paid sick leave to their hourly employees. The percentage is higher for restaurant managers.

In many cases, taking care of employees has gone beyond those still working at restaurants. Half the companies surveyed said they are extending health benefits for an average 8 weeks for those employees that have had to be laid off or furloughed.

Black Box Intelligence has launched a Sales and Traffic Tracker now collecting sales and traffic trend data, 3 times per week (M, W, F). This is open and complimentary to ALL restaurant operators in the restaurant industry. To participate, please email [email protected] from your restaurant company email address.