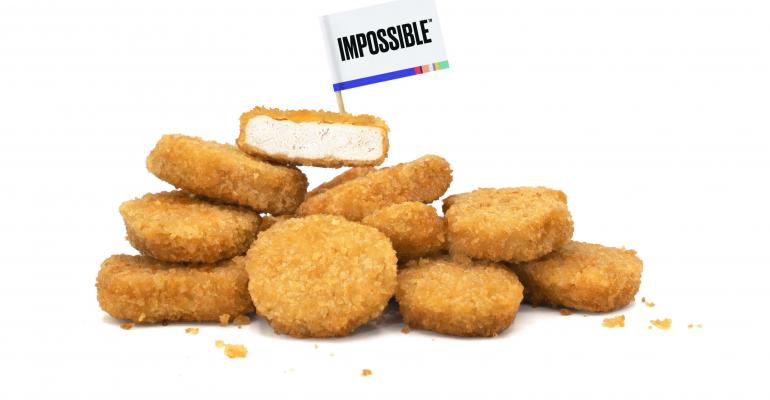 Burger King is testing the new Impossible Foods nuggets in several markets, following the success of the plant-based Whopper.

Next week, guests in Des Moines, Iowa; Boston and Miami will be able to try Burger King’s version of the chicken-free nuggets, which are already being rolled out by smaller chains following the foodservice debut of the Impossible product last month.

"This isn't the first time we have teamed up with Impossible to make waves in the industry. In 2019, we became the first quick-service restaurant to serve the award-winning, plant-based Impossible patty and offer the iconic Impossible Whopper," said Ellie Doty, Burger King North America's chief marketing officer, in a statement. "So it's only fitting we're the first global QSR to test the Impossible Nuggets. We're excited to hear what our guests in the test markets think of this latest innovation."

Impossible Foods launched the new chicken-like product in early September, and it was expected to be in 10,000 grocery stores by later this year.

The nuggets feature a golden, crispy breadcrumb coating, a “juice and springy white-meat texture,” and a savory chicken flavor, according to Impossible Foods. They contain 40% less saturated fat and 25% less sodium than real chicken nuggets.

And, based on a preliminary Life Cycle Assessment of the product, production of the nuggets use up to 49% less land, 44% less water and generate 36% less in the way of greenhouse gas emissions compared with the production of animal-based nuggets, Impossible press materials said.

At Burger King, however, the nuggets are not expected to be strictly vegan because they’ll be cooked in the same oil as the products with meat and cheese, according to the Des Moines Register.

Officials with Burger King, or parent Restaurant Brands International, did not immediately respond to questions about the test, including the price of the nuggets.

The Impossible nuggets also debuted last month at the Fatburger chain, which is owned by FAT Brands along with 13 other concepts.

For Fatburger, it’s the first nugget of any kind on the menu, and the company said seven out of 10 customers in a blind taste test chose the plant-based version over leading real chicken nuggets, according to Impossible Foods.

Fatburger was also an early adopter of the Impossible Burger in 2017, and since then the plant-based burger has become a mainstay, the company said.

“Knowing that the Impossible menu items help attract new customers while offering the Fatburger flavor that guests know and love, we’re confident that Impossible Chicken Nuggets will appeal to a wide-ranging audience and be a success among our customers,” said FAT Brands CEO Andy Wiederhorn, in a statement.

Meanwhile, Impossible competitor Beyond Meat had already thrown a tender into the ring in July, when the company said it was launched in about 400 restaurants. Beyond Tenders are scheduled to appear in grocery stores this month.

Dog Haus, for example, is also using the Beyond Chicken Tenders for its Bad Mutha Clucka sandwich and the Beyond the Hot Chick, which is a Nashville hot-style version. The menu items are also available on the sister virtual brand menus for Bad Mutha Clucka and Jailbird.

Both McDonald’s and Yum Brands Inc. have been working with Beyond Meat to bring plant-based products to their menus, including a promised McPlant platform at McDonald’s. Yum Brands KFC began testing a reformulated plant-based chicken nugget last year

Next up: plant-based pork.

Chang’s Momofuku Ssäm Bar in Manhattan debuted the plant-based Impossible Pork on Sept. 23 and the product was being rolled out to more than 100 restaurants in Hong Kong this month.

At Momofuku, the minced pork-like product was served with Spicy Rice Cakes as Impossible Pork Ragu.

UPDATE: This story has been updated to include comments from Burger King and clarify that Impossible nuggets are available at Fatburger but not other FAT Brands-owned brands.