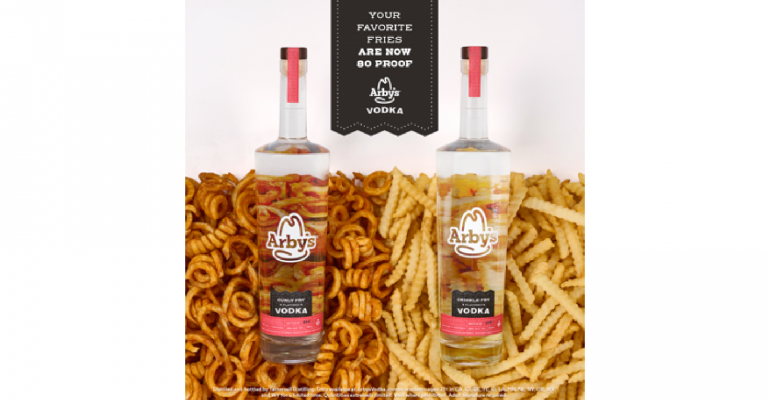 Earlier this year, Arby’s added Crinkle Fires to its permanent menu alongside the brand’s iconic Curly Fries. Now, Arby’s is taking its dual fry offering into the world of spirits with two distinctly flavored Vodkas for Arby’s fans 21+. The limited-edition spirits are made from high-quality potato vodka and distilled with real ingredients inspired by the brand’s Curly and Crinkle Fry flavor profiles.

“Arby’s recently added a Crinkle-cut option to accompany our iconic Curly Fries, providing another choice for fry-lovers,” said Patrick Schwing, CMO of Arby’s. “Though we’ve mastered the art of drive-thru fries, we wanted to take is one step further – by making them 80-proof. Being a potato-based liquor, this limited-edition vodka is infused with crinkle and curly fry flavor so Arby’s fans can enjoy our menu from bag to bottle. And we’ve worked to Chef Justin Sutherland to create Arby’s menu-inspired cocktails that pair perfectly with the new vodka flavor profiles.”

To spark inspiration when you are mixing up cocktails, Arby’s has partnered with Celebrity Chef and Arby’s Aficionado, Justin Sutherland for two signature Bloody Mary recipes featuring Arby’s Curly Fry and Crinkle Fry Vodka. The specially-created cocktails include classic Arby’s menu items like Horsey sauce and Arby’s sauce, as well as toppers such as Curly Fries, Mozzarella Sticks and more. These videos will be dropping on Justin’s and Arby’s social channels in the coming days leading up to the first drop on November 18th.

The Vodka will be available in limited quantities on November 18th at 12pm EST and in a second drop on November 22nd. It can be purchased on ArbysVodka.com for $59.99, including shipping and handling.