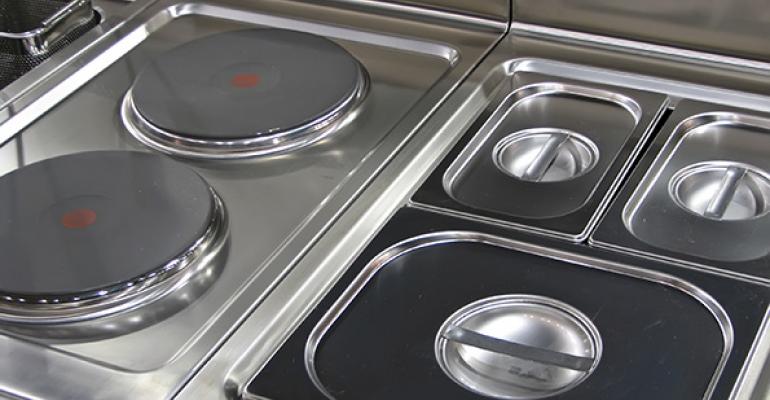 Foster Frable is an NRN contributor and a founding partner of Clevenger Frable LaVallee Inc. in White Plains, N.Y. He has designed more than 400 foodservice projects, including restaurants and operations in hotels, colleges and more. He can be reached at [email protected]

Every two years, buyers and specifiers of foodservice equipment and supplies head to the NAFEM Show, which was held this year in February, in sunny Anaheim, Calif., a nice break from the brutal weather in much of the U.S. The NAFEM Show has over 500 exhibitors and requires a full three days to explore.

Equipment that trains your employees

Several manufacturers introduced enhancements to equipment that trains and guides users through menus, cooking and cleaning. The expanded use of touchscreen video displays has provided manufacturers with the opportunity to add multilingual guidelines and “how to” directions on everything from step-by-step recipes preloaded by the operator, to graphic enhancement instruction for operating and cleaning equipment. Front-of-house beverage dispensing equipment has similar enhancements for end users, making it much easier to operate a self-service bean-to-cup or espresso maker.

A great example was the CookTec StepXStep. The display on this special model, high-power induction range not only guides the user through timing and temperature, it details each step and which ingredients to add.

Another good example is the GreenEye and GreenCoach system offered by Meiko on its larger dishwashers, which guide the operator toward the most efficient loading and direct the water and rinse spray to the specific section on the belt/rack where the dishes are located.

Refrigeration sized to fit all needs

Attendees saw several new refrigeration sizes and configurations. A number of missing market niches and sizes long available in Europe had been absent from the U.S. refrigeration market. Although many of these new models were developed for specific chains, they can benefit any operator, particularly those in need of smaller-sized units to fit kiosks and micro-kitchens.

With restaurant chains again growing at a rapid pace, manufacturers were active in designing new products to address related needs. To satisfy the wide variety of menus and operating styles of these chains, manufacturers appear to be willing to develop products with more flexibility and a diversity of sizes and options. In the past there had been more of a “take it or leave it” attitude.

Energy saving “R-290 Refrigerants” — also known as propane — for commercial refrigeration are now being introduced in North America, so the challenges of evacuating refrigerants during service calls has been largely resolved. Multi-year tests in Europe have proven that it is a safe product. Products using R-290 aren’t yet available in three-door reach-in or walk-in coolers, but for basic one- and two-door coolers, it offers the lowest carbon footprint of any refrigerant.

The shape and design of display cases has changed. Square or slanted glass is replacing curved glass in upscale outlets. The new shapes provide a “jewelry box” appearance, and architects and designers love it. Curved glass has a tendency to reflect lighting that is above the case, and can have minor waves within the glass that may distort the view of the food inside, so this is a positive change.

Coming to a restaurant near you: Coffee ground and brewed by the cup

The popularity of pod brewers has changed the way we look at coffee in our homes and offices, evolving from batches to single cups. This concept has moved into the commercial equipment market, with a new family of single-serve coffee brewers that brew one cup of freshly ground coffee in about 35 seconds, which is considered the maximum time a customer will wait.

There were a dozen new machines demonstrated that are ideal for operators who want to offer the freshest coffee at all times of the day, especially decaf and exotic choices. Hopefully this will end the serving of coffee sludge that sits in some restaurants’ coffee pots at 3:30 p.m. Several of these new bean-to-cup brewers provide a swing-out spout on the side to brew larger batches for higher volume periods.

The one word that was featured most often on signage at the show was “ventless.” I counted at least 50 products that offered some product or accessory that would eliminate the need for a grease hood. From counter-top rapid cook or “speed ovens” (at least four new manufacturers at the show), to all-in-one ventless cooking stations, the mission is to be able to install hot food production in sites where grease hoods are not possible, or so costly it would bankrupt the operator. While these solutions offer options, they also raise the question of where heat, smoke and food odors that used to exit from the exhaust stack go. Better those thinking of purchasing these systems think grease-ventless and not just ventless. With limited or no general ventilation, operators may be disappointed with some of these products.

Building and operating a restaurant in the U.S. is becoming quite difficult in many areas of the country because of increased regulatory scrutiny. Manufacturers have tried to address some of these issues with new products that incorporate controls that monitor or raise alarms when they sense conditions that could impact food safety or produce high levels of effluence or odors. Regardless of how well thought-out these products are, overall, I sensed growing frustration with an increasing lack of uniformity in code requirements and compliance that will continue to challenge kitchen designers and operators.

A few of my favorite products from NAFEM

EVO Event™ Ductless Downdraft Ventless Cooking Station: EVO has offered portable round grills to caterers and hotel event spaces for over 10 years, but were limited to outdoor or temporary locations because they didn’t have exhaust hood and fire protection systems integrated with their equipment. EVO has now developed and secured major approvals for two large griddles with an innovative downdraft grease and odor-capture system and elegantly placed fire suppression nozzles. In tests at several Benihana restaurants, these EVO ventless grills opens up the potential for a wide variety of exhibition cooking stations in dining areas, serveries and buffets, where it was previously impossible to cook because of the lack ductwork for ceiling-mounted hoods.

MerrychefR rapid cook oven with Panini Grill: High-speed ovens and microwave-assisted panini grills have been winning over sandwich operators in high-volume locations where a traditional two-sided sandwich grill was too slow. Unfortunately, speed ovens didn’t create the “marks” that a two-sided grill accomplishes. Merrichef developed a simple and easily removable semiautomatic, non-stick panini press attachment that fits inside its smaller eikonR oven, which is activated by the mechanical motion of opening and closing the oven door. It’s a clever and simple solution, and when the attachment is removed, the oven can be used for rapid cooking. Great engineering!

Edlund Titan™ Max-Cut Food Prep Tool: The market versatility of several of the manual food prep machines is offset by the challenges of changing and cleaning various blades and accessories. Edlund’s new design incorporates four prep functions — cutting, coring, wedging and dicing — into a single manual machine that makes this effort a lot easier. Just swap the quick change pusher and cartridge and the machine is ready for the next task.

You will be able to experience this equipment at the Kitchen Innovations Awards booth at the NRA Show in Chicago, May 16–19.