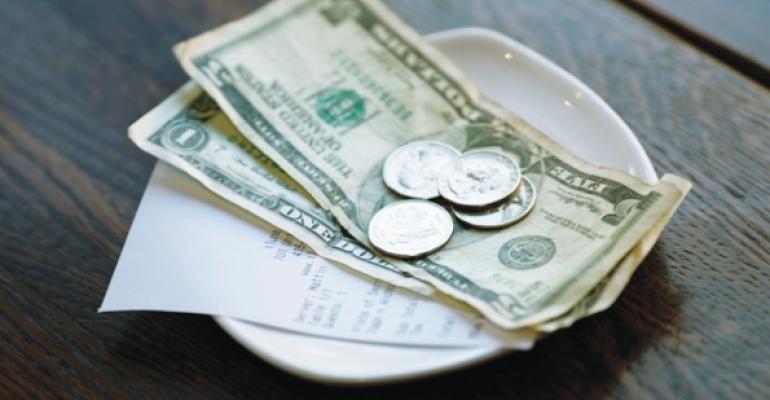 Tips for restaurants on the IRS automatic gratuity rule

This op/ed was contributed by Jordan R. Bernstein, an associate at Michelman &amp; Robinson and a member of its Hospitality Law Group. This article does not necessarily reflect the opinions of the editors and management of Nation&rsquo;s Restaurant News.

Full-service restaurants have long been comfortable applying automatic gratuities to their customer checks, especially for parties of six or more. A new ruling by the Internal Revenue Service — which takes effect this month — is likely to spell the death knell for automatic gratuity policies. Are you ready for the new policy?

The standard practice of automatically adding a tip of 18 to 20 percent to a restaurant bill for large parties has been a hotly contested issue for some time. Frequently, patrons are disgruntled when faced with paying a forced gratuity on top of their bill. A few big-name restaurateurs are already getting ahead of the issue by taking their reforms a step further and abolishing tipping altogether. Instead, they are paying higher wages to servers and offsetting the increased labor costs by raising menu prices. As a byproduct of such a “wage over tip” model, operators can eliminate the pitfalls of the often complicated tip-credit rules, create more equality with staff who are not eligible for tips and, of course, avoid the implications of the IRS’s new ruling.

Still, with the economy slowly creeping toward recovery, most restaurant operators have stuck with the tipping model in order to keep menu prices stable. And tipping is big in the United States — full-service restaurant sales totaled more than $202 billion in 2012 according to the National Restaurant Association — likely resulting in $30 to $40 billion in tips.

According to the IRS, gratuities that are automatically added to a restaurant bill will be considered service charges rather than tips for Federal Income Contributions Act, or FICA, tax purposes, and restaurant owners will need to treat them as wages. This new clarification by the IRS will have a major impact on the requirements for how restaurants and other hospitality businesses conduct their automatic and manual reporting systems. Those failing to comply could face significant penalties from the government and run the risk of costly class-action lawsuits brought by their employees. They could also face potential consumer protection issues.

To be considered a gratuity or tip for tax and wage purposes, a customer’s payment must satisfy four factors:

• The customer makes the payment free from compulsion;

• The customer has the right to determine the amount;

• The payment is not the subject of negotiation or dictated by an employer’s policy;

• Generally, the customer has the right to determine which employee receives the payment.

One alternative practice that many restaurants have already implemented is to provide customers with calculations for 15 percent, 18 percent and 20 percent of the total check for tipping purposes. The restaurant is thereby suggesting a tip, but in the end leaving customers free to decide for themselves.

Impact on minimum wage and overtime

One thing is clear — this new rule is certain to greatly affect businesses that choose to continue imposing automatic gratuities. Consider the following: The base wage for your servers is $5.25 per hour.  During a dinner rush hour, one server receives an additional $30 in service charges that were automatically added to a $150 check. The server’s total wages just increased by $30.00 for purposes of establishing the server’s regular rate of pay. This clearly creates a whole slew of payroll issues, not the least of which is calculating overtime wage rates for employees whose wages per hour fluctuate based upon the amount of money they earn in a particular hour. The issue is further obfuscated when one considers payroll tax liability on the additional wages earned as a result of service charges misclassified as tips.

Another major consideration: the FICA tip credit. The tip credit rules allow for employers to take a tip credit toward their minimum wage obligation for tipped employees. The tip credit is determined using FICA taxes that have been paid on reported tips and wages that exceed the minimum wage requirement. In general, a restaurant can receive a credit for any FICA taxes (Social Security and Medicare) paid on tips beyond the amount used to pay each employee the federal minimum wage. Since service charges are considered wages, they are not eligible for tip credit.

Key suggestions for restaurateurs and those in the hospitality industry:

• Review your processes and make changes to automated or manual reporting systems and business practices in order to properly distinguish between service charge and tip income.

• Allowing customers full discretion regarding tips will ensure compliance with the new rules, and help avoid potential liability and claims for violation of state and federal wage and hour laws, as well as tax liability. Cease all policies that impose automatic gratuities on customers, regardless of table size. Staying in compliance will also allow you to benefit from the FICA tip credit.

• Consult with an attorney, tax advisor or your payroll service providers so you’re complying with the law, paying necessary taxes and paying your employees proper wage rates for all regular and overtime hours worked.

The deadline is here, and you can avoid penalties and unnecessary lawsuits by adhering to the new IRS rule and taking proactive steps to make sure you are in full compliance.

Update: Feb. 10, 2014 An earlier version of this article contained an ambiguous example regarding a server's hourly wages, which stated, "The base wage for your servers is $5.25 per hour. During a dinner rush hour, one server receives an additional $30 in service charges that were automatically added to a $150 check. The server’s wage just became $35.25 for that hour.” This could lead to an incorrect calculation of the server’s regular rate of hourly pay, which is calculated by adding any service charges to a server’s total base wages for a given period, then determining the hourly wage from that number.

Jordan R. Bernstein is an associate at Michelman & Robinson’s Los Angeles office and a member of its Hospitality Law Group. Skilled at both transactional work and litigation, Bernstein focuses his practice on the restaurant food and beverage industry. He can be reached at [email protected].

Do you agree with Bernstein? Sound off in the comment section below.