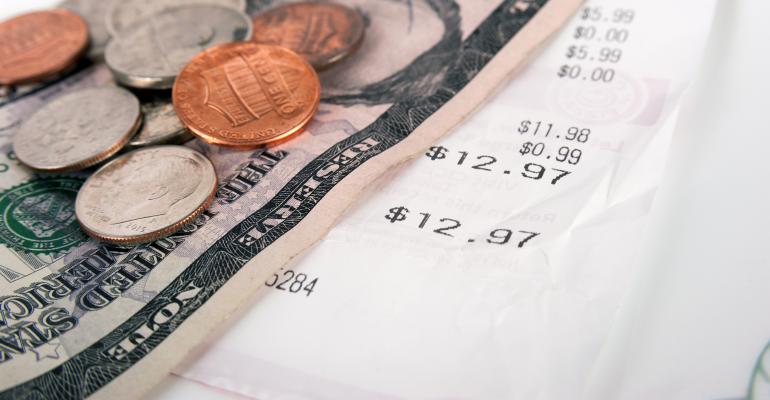 Suggested gratuities inch up to an 18-percent minimum

A 15-percent tip has traditionally been standard, but recent reports show that’s changing

Is the 15-percent tip going away?

Among a growing number of restaurants that print a suggested gratuity on guest checks, it appears to be.

The trend was highlighted last week, after news emerged of a California Restaurant Association campaign being tested among restaurants in Palo Alto, Calif.

The goal is to raise awareness about the economic challenges restaurants face, said Sharokina Shams, the CRA’s vice president of communications.

On guest checks, the participating restaurants are printing the statement: “We love our guests … FYI: On average, for every $1 spent eating in the USA, about 95 cents goes to food, the place and a GREAT staff!” Reactions to the post, however, were not so much about the statement. Instead, commenters noted La Bodeguita’s suggested gratuities of 18- and 20-percent — which did not include 15 percent — a move that was unrelated to the campaign.

Tipping in the U.S. has traditionally been considered to be in the 15- to 20-percent range. But that appears to be changing.

At La Bouchon in Los Angeles, a recent check suggested gratuities of 18 percent and 20 percent, but not 15 percent.

A recent check at the casual-dining chain Houlihan’s in Texas suggested tips of 18 percent, 20 percent and 22 percent.

The 18- to 22-percent rates are also suggested by some restaurants within Lettuce Entertain You Enterprises, based in Chicago, as well as Jose Andres’ ThinkFoodGroup restaurants in the Washington, D.C., area.

The restaurant decided to suggest a gratuity in part because of its location near Stanford University, where it gets a lot of international travelers who may not be familiar with American tipping culture, he said.

When deciding what tip rates to suggest, Ekwall said they calculated their servers tip rates and found the average was already higher than 15 percent, so it made more sense to use 18- to 20-percent, rather than suggest guests go lower.

“There’s a different level of affluence in the Bay Area, and a lot of people dine out, and I think the standard has gone up,” he said.

Shams of the CRA emphasized that suggesting a gratuity is not part of the campaign. Instead, the message aims to educate diners about the economic model of restaurants.

“We’re trying to get across the message that restaurants are a labor of love,” Shams said. “They’re not cash cows, and owners are not going home with piles of money every night.”

The 5-percent margin reflected by the CRA campaign is a national average, she said, but “it’s not unheard of for people to make 2-percent to 3-percent profit,” she said.