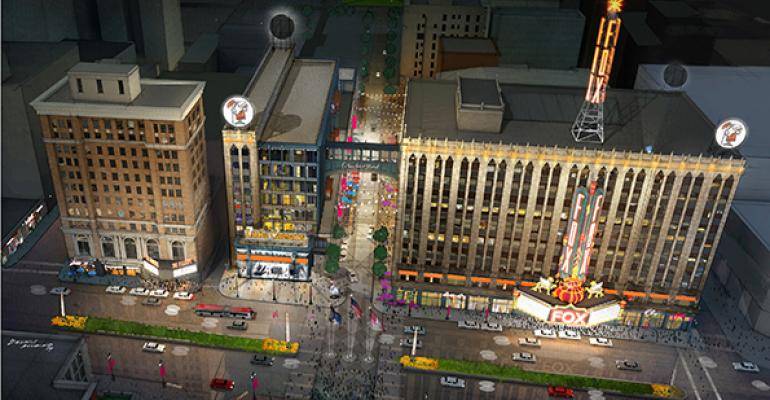 As pizza chain’s global footprint grows, so does Detroit office

This spring, Little Caesars plans to break ground on a new 205,000-square-foot Global Resource Center that will more than double the size of the company’s headquarters in downtown Detroit.

A new tower will be attached to the existing Little Caesars Fox Office Tower with a pedestrian bridge. The new building will house 600 additional employees over the next decade, and workers will have input in the structure’s design, said David Scrivano, Little Caesars’ president and chief executive.

Little Caesars’ owners, Michael and Marian Ilitch, moved the chain’s headquarters to its current location in Detroit in 1989, at a time when many companies were leaving the city’s downtown. It was one of only seven companies to move their headquarters into downtown Detroit since 1950, Scrivano said.

“They love Detroit,” Scrivano said of founder-owners Michael and Marian Ilitch. “I don’t know of anybody that’s given back to Detroit more.”

Michael and Marian Ilitch also own the Detroit Red Wings ice hockey team. Marian owns the MotorCity Casino Hotel, and Michael owns the Detroit Tigers baseball team. They also own several other entertainment, development and foodservice companies. And they are big investors in a bold sports, entertainment and residential development in the city’s downtown called District Detroit.

Little Caesars’ headquarters is located in that district, and Scrivano said many employees plan to move there once apartments within the development are built.

The foundation for Little Caesars’ expansion was actually laid more than a decade ago, when the nation’s third-largest pizza chain remodeled its locations, started focusing on walk-in customers and aggressively expanded its franchise business.

“It’s been well over a decade,” Scrivano said. “We’ve had strong growth, strong sales and a lot of great, new franchisees that have joined us.”

Little Caesars has been on a roll, adding at least 500 restaurants each year from 2011 through 2013, giving it nearly 3,900 U.S. locations through the end of 2013, according to Nation’s Restaurant News’ Top 200 census. It added “hundreds” of locations in 2014, according to a company spokeswoman.

According to NRN estimates, the company’s market share among large national pizza chains has jumped from about 15 percent in 2011 to 17 percent in 2013.

In the early 2000s, Little Caesars reimaged all of its U.S. restaurants. In 2003, the chain tested a new menu platform known as Hot-N-Ready, offering large pepperoni or cheese pizzas for $5. That strategy was expanded nationally in 2004.

Little Caesars also concentrated on its traditional strengths: carryout and assuring customers that they can walk into a location and get a pizza quickly.

The Hot-N-Ready strategy became a hit, particularly during the recession, as value became the overarching driver for many U.S. consumers, while convenience lured families hard-pressed for time.

“We try to create value and serve families,” Scrivano said. “And families appreciate the value and the convenience and the quality of the product.”

The company currently has a limited-time offer of a Soft Pretzel Crust Pizza for $6, for example, and it serves a Detroit-style deep-dish pizza for $8.

Restaurant workers can be seen making fresh dough — something uncommon in the chain restaurant world — and its cheese is never frozen, Scrivano said.

Another turning point came in 2006, when the company started ramping up for more aggressive franchise growth. Little Caesars expanded its staff and added franchise licensing advisers to search for operators in both domestic and international markets.

In the U.S., the company concentrated its expansion on specific markets, beginning in Dallas and Atlanta. It then moved from market to market, and is currently concentrating on the Northeast, including New York, New Jersey and Philadelphia.

“It’s a very targeted approach,” Scrivano said. “It’s important to the communities where they see a number of Little Caesars built parallel to one another. And the franchisees can get together and advertise more effectively.”

That growth has sparked new interest from franchise operators. The company has also been aggressive in recruiting veterans as potential franchisees. Little Caesars was one of the first chains to launch a veterans’ program, and has more than 100 locations now owned by former servicemen and women.

Scrivano recently returned from a trip to Panama, where the chain opened a location. It also recently opened new locations in Costa Rica and Australia. The company is targeting Asia, Central America, Latin America and the Middle East.

“It’s exciting,” Scrivano said. “People around the world love pizza. And 95 percent of the population lives outside of the U.S.”