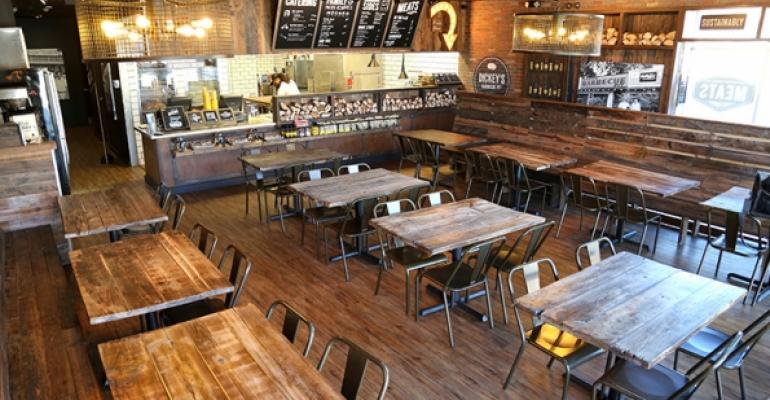 Roland Dickey Jr., CEO of the 520-unit, Dallas-based chain, said the company spent a year designing the new prototype, which debuted in October in the makeover of a unit that originally opened in 2008.

“We took out 700 square feet,” Dickey said. “We wanted to build it to exactly what the prototype would be, so this is 1,500 square feet.”

Square footage for the kitchen was nearly halved, leaving about 500 square feet for food storage and preparation areas, he said. The dining area, which accommodates about 50 seats, and restrooms occupy the remaining 1,000 square feet, Dickey said.

The new look and pared-down menu will appear in the 32 restaurants that are under construction, Dickey told Nation’s Restaurant News, as well as some aspects that will be adapted as franchisees refresh their units.

One big change that affected the menu is that fryers, ovens and ranges are no longer required in the kitchen package, Dickey said.

“There’s no gas in this building,” he said. Plus, the smoker was changed from whole wood to pellets. “Buying cords of wood, we found the price was going up and up and up,” Dickey noted.

The menu has been pared down as well, with ham, French fries, fried okra and baked potatoes removed. “Before, we had eight meats and 12 vegetables, and now we have seven meats and eight vegetables,” Dickey said. “It’s much more streamlined.”

“Operationally, it’s set up to be lean and mean,” Dickey said. “We deconstructed it and put it back much more simply than before.”

Another change is the removal of the soft-serve ice cream machine, which had long been a fixture at Dickey’s. While the ice cream was offered as a lagniappe to customers, the maintenance of the machines was a large source of complaints among franchisees, Dickey said.

In the prototype Dallas unit, sales of desserts, such as individually wrapped cookies and slices of pecan pie, have increased with the removal of the ice cream machine, Dickey said.

Many of the changes were made to increase service time as well, he said. The standard service time from order-pay to delivery to customer is two minutes. “We had trouble meeting that when people had to take time to go to fryers,” he said. “We wanted to do fewer things better.”

Some aspects of the prototype have already been modified. The restaurant opened in October with a communal table, but that has been replaced with four-tops. “We found the individual tables filled up faster, so this configuration worked better for us,” he said.

Dickey said this fourth-generation, or 4G, prototype was the biggest and “most radical overhaul” the brand had taken.

“We feel like we got this one really right,” he said. Aspects like new training programs will be rolled out in January, he added.