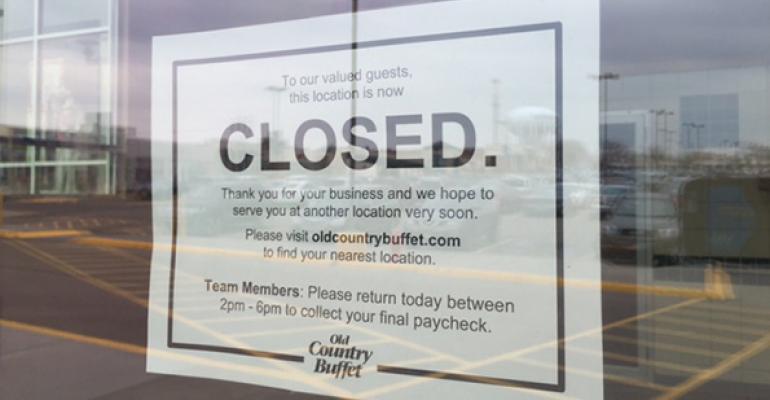 Operator of Old Country Buffet, Ryan’s has closed half its locations in a month

Ovation Brands Inc. closed 92 locations over the weekend and trucked away equipment in its second round of closures in just a month that has cut more than half of the buffet operator’s total locations.

The closures of Old Country Buffet, HomeTown Buffet, Ryan’s and other locations came just before Ovation was placed into bankruptcy by its owner, Food Management Partners, which bought the company in August.

This is Ovation’s third bankruptcy in just eight years.

The company, which had 675 locations in 2006, and well over 300 units at the time of the acquisition, is down to just 150 outlets following the closure of 74 locations last month and the shuttering of 92 units over the weekend.

In a release on Monday afternoon, the company said it filed bankruptcy to restructure debts and “strengthen operations by closing certain weaker restaurants and recapitalize its business.”

Layoffs at the company were reported shortly after the FMP acquisition.

According to bankruptcy court documents, Ovation lost an $11.4 million judgment in a court case in October over allegations that date back to 2010. The filing said that prior management “overlooked” the lawsuit, and did not timely file an answer to the complaint.

The filing also said that prior management did not disclose the existence of that lawsuit to Food Management Partners.

“The Chapter 11 is prompted by the discovery of liabilities, or alleged liabilities, that we believe were not disclosed in our negotiations,” Peter Donbavand, vice president for business development with Food Management Partners, said in a statement. “We intend to investigate the propriety of the disclosure, and intend to consult with our counsel regarding any remedies we may have.” Donbavand also said that several “large, long-term contracts” were recently determined to be in arrears. “We are completely committed to the continued operation of these brands, and this is a necessary step for us to make this happen,” he said.

The company also said that financial results since the merger “have been far less than expected.” Sales fell 22 percent from initial projections, which drained cash flow and caused “a severe liquidity strain.”

Ovation, also known as Buffets LLC, has $46.2 million in debt, along with unsecured debt of more than $60 million.

It has also hired a chief restructuring officer, Bill Patterson of Bridgepoint Consulting, according to the filing.

Ovation Brands, which had been called Buffets Inc., has a history of financial problems. The company was formed with its 2006 acquisition of Ryan’s Restaurant Group. Debt from that deal, however, led to its first bankruptcy, in 2008.

It didn’t recover from that bankruptcy and filed a second action in 2012. A group of distressed debt providers acquired the company coming out of that bankruptcy.

FMP is a little-known company that has acquired numerous brands in recent years, some of them out of bankruptcy. It also has a track record of aggressive staff cuts and unit closures.

Workers at many of the restaurants closed over the weekend arrived at work Sunday morning to find their locations closed, according to numerous media reports. In some cases, moving trucks were seen moving equipment out of the closed locations.

UPDATE: March 7, 2016 This story has been updated to include comment from Food Management Partners.