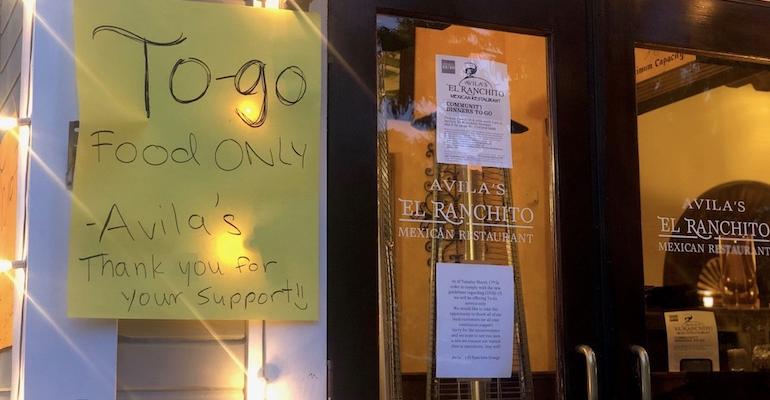 Restaurants’ same-store sales improved slightly in the week ended April 5, down a comparative 62.3% but marking a 4.7-percentage-point increase from the prior week, according to Black Box Intelligence.

“Since the negative effect of COVID-19 reached national scale mid-March, the week ending April 5 has been the best for restaurants based on comp sales growth,” the Dallas-based analytics company said in a report Wednesday.

“There are some signs that the sales decline may have reached bottom in the last few weeks and the industry is now experiencing some very slow improvement,” Black Box said.

The biggest declines in same-store sales continued to be in fine dining and family dining, with both segments logging declines of more than 80% during the week ended April 5.

Dayparts with the biggest declines in same-store sales were late night and lunch, both marking drops of more than 80%, Black Box said.

“The only daypart with comp sales better than negative 70% was mid-afternoon,” the report said, noting the daypart was down 64.7%.

“Pizza concepts continue to experience the smallest decline in comp sales, but there is an encouraging sign in the fact that all cuisine types tracked by Black Box Intelligence saw their comp sales declining at a lower pace during the last week,” the Wednesday report said.

The Black Box Consumer Intelligence division noted that consumers allocated 78% of their food spend toward groceries in the week ended April 5, up from 66% in January.

“Full-service restaurants received only 3.3% of consumer food spend, down from 10% in January,” the report noted.

The firm found 67% of restaurant companies had furloughed some employees in response to COVID-19 and 22% had laid off employees.

“The percentage of restaurant companies that now offer paid sick leave for their hourly employees increased to 67%,” Black Box said, and the percentage was higher for restaurant managers.

Almost half of companies had cut base pay of their executives in response to the business downturn caused by the pandemic.

Black Box Financial Intelligence’s figures for this report were based on data submitted directly by restaurant companies down to the individual restaurant location, a spokesperson said, adding that the week ended April 5 provided the deepest level of detail and represented Black Box Financial’s largest data set.