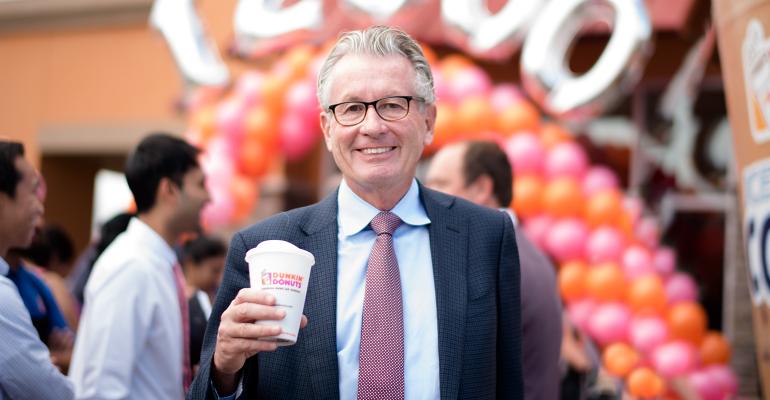 Delivery has only been available in 10 units in Los Angeles and Chicago for a couple of weeks. Travis described it as an “alpha minus” test in the very early stages.

But delivery has a bright future for both Baskin-Robbins and sister brand Dunkin’ Donuts, he said during a visit to Southern California, where the company’s 12,000th Dunkin’ Donuts location opened in Riverside.

“I see delivery working extremely well in Asia,” Travis said. “In the U.K., everyone’s talking about delivery. It has a very big future in the restaurant industry, not only in QSR, but in casual dining and also very high-end restaurants. If you go to London, just about every restaurant has delivery now.”

For both brands, offering delivery is a key feature of the company’s attempt to drive same-store sales through convenience, Travis said.

The increase at Dunkin’ Donuts, however, was largely based on average check. Traffic fell 1.4 percent.

A focus on convenience is one plan to turn slipping traffic around, Travis said.

Like the new unit in Riverside that opened Tuesday, many new Dunkin’ Donuts locations have drive-thrus, including about 80 percent of units in California.

More than 18 million users have downloaded Dunkin’ Donuts’ On the Go app that allows for ordering ahead, Travis said. Baskin-Robbins also launched a new order-ahead app about five weeks ago.

Some Dunkin’ Donuts locations are also testing curbside service, which would add another element of convenience, he said.

“The key is on the go,” Travis said. “Dunkin’ will drive convenience more and more in the future.”

Despite the ubiquity of Starbucks in the West, many Californians are East Coast transplants that bring with them a loyalty to the Dunkin’ Donuts brand and style of coffee.

The Riverside location, owned by franchisee Parag Patel, is also roughly the 8,600th domestic location, and the 35th unit to open in California in recent years.

It’s really a return to the state for Dunkin’ Donuts, which existed in California years ago, before all locations disappeared as the chain refocused on the East.

Now the Western U.S. is seen as a huge growth opportunity. Travis said he expects 45 units to open in California before the end of 2016. The state has potential for more than 1,000 units, in time.

Nationally, Travis has projected the potential for 17,000 Dunkin’ Donuts locations, which he now sees as a conservative number.

“We feel really good and Dunkin’ will continue to be one of the fastest-growing concepts in the space,” he said.