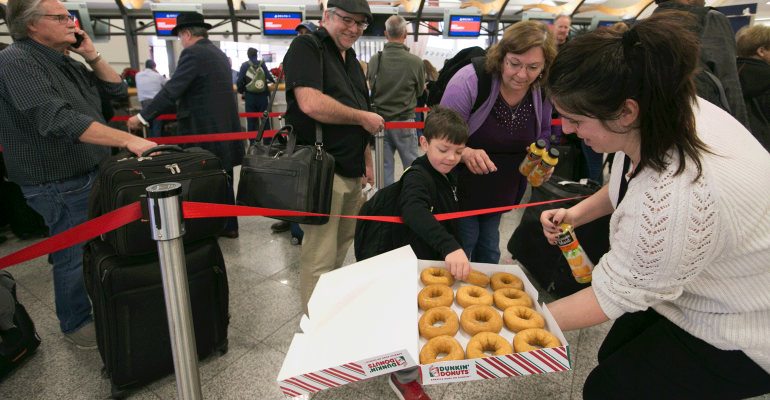 With no way to prepare food or process credit cards, a lot of improvisation was necessary

As airlines at Atlanta’s Hartsfield-Jackson Airport worked to get back to full capacity after the power outage that plunged thousands of holiday plans into chaos, restaurant operators are also rushing to ensure food can get to travelers again.

A fire at the main substation at the airport led to an 11-hour power outage over the weekend and cancellation of 1,500 flights.

With that many stranded passengers, naturally food and drinks were precious items. But airport restaurants faced the same problem: no electricity.

With no power, none of the restaurants could cook fresh food and it was simply a race to distribute the food already made to people in the terminals, Stephanie Fischer, executive vice president at Hojeij Branded Foods (HBF), told Nation’s Restaurant News.

“We kept the bars going for as long as possible,” Fischer said. “But after a short time, we ran out of liquor.”

Everything had to be done on a cash basis since there was no way to run credit cards and point-of-service systems were down, she added.

Before dawn Monday, HBF staff were working on getting restaurants ready for business, which included working on the Wi-Fi as trouble persisted with the airport internet and disposing of pretty much all the food left over.

The company does have contingency plans for blackouts, such as immediately putting protein into freezers, but not for something like 11 hours, Fischer said.

“We kept the restaurant open 24-hours,” said Jesse Gideon, COO of Fresh To Order. “We gave out free food and water and to service passengers throughout the night.”

Despite the aggravation of passengers, there were few incidents of trouble. A kiosk was raided and some beer was taken from locations that don’t lock up, but overall staff and travelers were working together, especially to help those who needed to get around and couldn’t rely on the airport train or elevators, Fischer noted.

“We tried to do as much as we could to give out some free food,” she added.

Though HBF’s Chick-Fil-A was not open, other locations of the Atlanta-based quick-service chain made a special exception to open Sunday and bring food and water to stranded passengers.

LIGHTS ON and delivering food and water to our passengers! Thank you @dancathy with @ChickfilA for opening on a SUNDAY! #ChristmasMiracle pic.twitter.com/0PlSxHIWj5

“Our Chick-Fil-A killed it,” Fischer said.