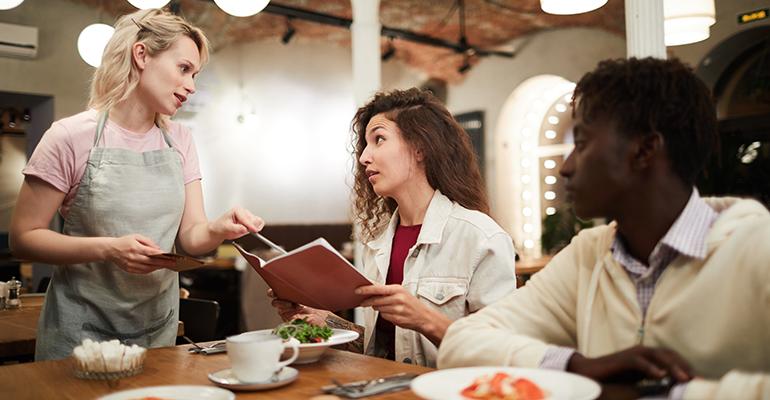 Wagging the dog: Can restaurants control the regulations they face?

Kruse and Thorn discuss how restaurants do, and should, respond to new laws

There will be lots going on this coming May 7, Bret. It’s National Teacher Day for one thing, and it’s National Roast Leg of Lamb Day for another. The foodservice pros who run the concessions at Churchill Downs will still be in recovery mode after having served a whopping 120,000 mint juleps at the Kentucky Derby weekend just ended. Oh, and by the way, it’s also the day that the Food and Drug Administration will begin enforcement of menu-labeling laws.

The press releases heralding the enactment of the Food Labeling; Nutrition Labeling of Standard Menu Items in Restaurants and Similar Retail Food Establishments, which is the official and unwieldy name of the act, sounded sort of muffled and anticlimactic to me. After all, the original rules were mandated under the Affordable Care Act (ACA) in 2010, and the intervening years have seen frantic back and forth on all sides regarding which foods, beverages and segments were covered. The heated debates forced three extensions beyond the law’s original compliance date of 2015; and while the rules went into effect on May 7 of last year, the FDA won’t begin enforcing them until May 7 of this year. This allows the agency time to work with operators by means of information, education and friendly persuasion before lowering the boom.

If you think that the post-legislative process has been a hornet’s nest, I’ll remind you of the long and tortuous road to the bill’s passage, which included some of the most divisive rhetoric that our industry has seen, ranking right up there with the passage of the ACA itself. All of which, of course, did nothing but postpone the inevitable. It was clear even to the casual observer that menu-labeling regulations were a done deal from the get-go. After all, the food industry had been there before.

Way back in 1990, the government launched the Nutritional Labeling and Education Act that targeted packaged-goods manufacturers and required that nearly all foods sold to consumers provide nutritional information on the packaging. Its objective was to stem the rising tide of obesity in the American population. And we all know how that worked out.

Obesity rates in the population at large jumped from about 11% in those 44 states for which data were available in 1990 to nearly 40% of adults in 2017; and it shows no signs of slowing down, according to the National Center for Health Statistics. Youth obesity rates seem to be more stable at a still distressing 19% of kids and teens.

On a similarly discouraging note, while there are lots of studies on the preliminary impact of menu labeling, most show only modest reductions in customers’ caloric intake. A story from CNN headlined Having Calorie Counts on Menus Will Make Us Healthier reported that, if and when patrons pay attention to the numbers, they ingest 30 to 50 fewer calories. Nothing to sniff at, perhaps, but hardly a ringing endorsement either.

When I think back over the complicated and contentious slog through the years, tears, fears and money that ultimately resulted in both ACA and menu labeling, I wonder why it had to be that way. After all, we are privileged to work in an industry with a steady supply of innovation and energy, fueled by entrepreneurs with great ideas. I felt then, and I continue to feel now, that we could have figured out a way to get ahead on these issues in a manner that was fair both to hard-working operators and their employees before the Feds stepped in.

I bring this up because there are other looming issues that have direct and broad impact on the restaurant business. Minimum wage is certainly one, and immigration is another. Because Washington has been so bogged down in score settling and juvenile behavior, regulation in these areas has been somewhat sidetracked. At least for the moment.

This could be a real opportunity for the restaurant industry to step into the void and take the lead in addressing these problems, because they aren’t going away. My trepidation is that if we don’t formulate common-sense proposals, history will inevitably repeat itself.

So I’m tossing this politically hot potato to you, Bret, with a weighty question:  Do you think we’ll learn from the past or will we be doomed to years of fruitless and expensive wrangling leading to inevitable and onerous regulation?

Nancy, I, too, have watched the foodservice industry get dragged kicking and screaming from one regulation to the next. Each new law was going to spell doom for their businesses.

Operators seriously, actually argued that if people weren’t allowed to smoke in bars, they’d stop going to bars. They lamented that their fried foods would be inedible or unmanageably expensive if they couldn’t use trans fats.

Every minimum wage increase was prophesied to be the absolute end of restaurants as we know them. So was providing health insurance.

And, of course, some restaurants do close in the aftermath of new regulations, but generally those are operations that are struggling anyway.

With menu labeling, the transition should be easy, because certain markets, like Seattle, New York City and the whole state of California, paved the way with early menu-labeling at chains with 20 or more units. National chains should already know what to expect, as should readers of this publication, because we’ve reported on it enough.

What generally happens when calories appear on menus and menu boards is that most customers don’t pay attention to the information at all. Some do, and they say something like, “My goodness! I had no idea that my favorite dish had so many calories!” Then they order it anyway and never, ever, look at the calorie count again.

Sometimes there’s a little bit of a drop-off in sales of particularly caloric items, and sometimes there’s a dramatic drop-off that lasts for around two weeks. Occasionally there are genuine shifts in the way people order, and you know what happens? The restaurants adjust.

I think it’s understandable for any business to chafe under new regulations. They generally seem pointless and ill-thought-out. But restaurateurs have a tendency to underestimate their own ingenuity, even though that’s at the crux of their business. Chefs in particular often thrive on adversity: The adrenaline keeps them going. I’m convinced that at any decent restaurant, if during a dinner rush the ceiling in the kitchen were to collapse, destroying the cooking equipment and killing two sous chefs, the people in the dining room would have no idea. There’s a drive to make sure that guests are satisfied, no matter what.

Now the industry is facing new waves of regulations, and not just menu labeling, but rising minimum wages, as you point out, and, in some jurisdictions, the elimination of the tip credit, which as you know allows operator to pay tipped workers below minimum wage as long as those workers earn enough in tips to make up the difference.

Here in New York City, many restaurateurs are convinced that without a tip credit they’ll go out of business. But there are seven states that have to pay their servers the full minimum wage, and guess what? Every single one of those states has restaurants in them.

I don’t mean to make light of the challenges that restaurateurs face. It’s a really tough business, but the people who are in it are tough, too. They didn’t go into it for easy hours or a quick buck, or if they did, they didn’t last long and probably quit to go into accounting or something.

And some restaurants are getting ahead of these new regulations, or engaging with legislators to make sure they’re reasonable and consistent. That happened as far back as the smoking bans that started sweeping the nation around the turn of the century. State restaurant associations and other lobbying groups for bars and restaurants advocated for level playing fields. They didn’t want customers crossing city or state lines to make use of more lenient laws.

Similarly with menu labeling, the restaurant industry advocated for national regulations that superseded local ones, so they could print one menu instead of dozens of different ones.

As for eliminating the tip credit, some restaurants have been proactive in that regard. That was clearly part of Danny Meyer’s motivation when he began doing away with tipping at restaurants and raising prices instead at his New York City-based Union Square Hospitality Group. (He also has said many times that it’s simply the right thing to do.)

Some operators followed suit (and some preceded him). Some succeeded, like Amanda Cohen, chef and owner of Dirt Candy in New York City, who did away with tipping, weathered the storm as she trained her customers to get used to it, and told me she ended up with an even more profitable restaurant. Others, like Anita Lo, chef and owner of Annisa, also in New York, ended up shuttering her restaurant. Still others went back to accepting tips, finding that, even if their servers were ready for the shift, their customers weren’t.

As for USHG, the results appear to have been mixed. The group has stuck to its guns, slowly rolling out its “Hospitality Included” model to all of its full-service restaurants, but they reportedly suffered the loss of many of their top servers.

So to answer your question, Nancy, yes, some restaurateurs have taken the lead to reshape the restaurant industry before regulators step in. As with most leadership situations, it has been difficult, but successful restaurateurs don’t usually shy away from difficulty, so I’m optimistic that they’ll be instrumental in shaping the regulatory framework of the future.