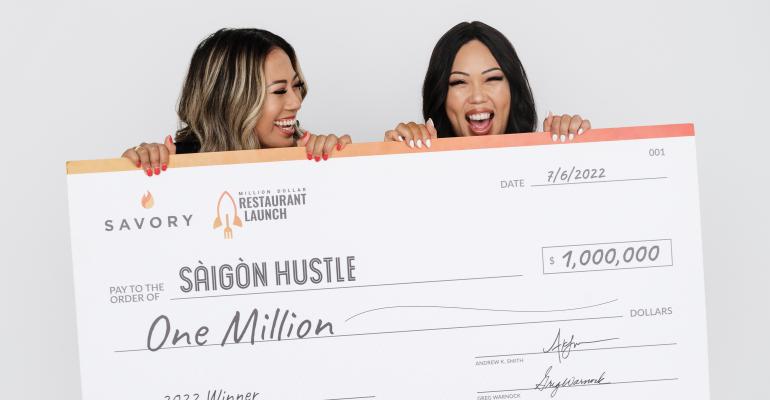 A Houston-based fast casual is walking away with $1 million courtesy of the Salt Lake City-based private equity firm.

Savory is investing $1 million into Saigon Hustle and its cofounders, Cassie Ghaffar and Sandy Nguyen, while also giving them access to the firm’s operational support. That support, provided by Savory’s team of dozens of industry veterans, includes everything from real estate, development and construction to store operations, technology, recruiting, training and finance.

“We got tipped off to this Million Dollar competition and we're like, ‘Why not?’” said Ghaffar in an exclusive interview with Nation’s Restaurant News. “I mean, it's such a great concept. There's no Vietnamese food in the fast-casual space right now at all on the level of where Savory can take us. … We couldn't have found a better match in chemistry and thought process, and our visions are aligned.”

Ghaffar and Nguyen have been in the restaurant industry for over a decade, having operated restaurants and clubs since their early 20s. Saigon Hustle was born out of their desire to serve the dishes from their Vietnamese heritage, through a model that was easy to scale into something national.

Saigon Hustle, which originally launched out of a ghost kitchen, today features a drive thru by which guests can order rolls, noodle bowls, rice bowls, banh mi and more. The drive thru was key to the partners, as they said it opens up Saigon Hustle to millions of Americans who are looking for fresh, healthy, authentic flavors served quickly.

“A lot of that stems from us, as mothers, being frustrated that there isn't enough drive-thru options for our kids, or we've always got sleeping kids in the back. So what concept could we do that we can push food out really quickly through a drive-thru and be able to service families that can't get out of the car?” said Nguyen.

Savory Fund launched the Million Dollar Restaurant Launch last fall with the intentions of supporting either a concept that had yet to open or one that was looking to expand from one location. More than 240 U.S. restaurant concepts applied for the program, according to the company.

“We are thrilled to partner with Cassie and Sandy and select Saigon Hustle as the winner of our Million Dollar Restaurant Launch opportunity,” said Andrew K. Smith, managing director of Savory, in a statement. “We are passionate about helping as many restaurateurs as we can because we are restaurant operators at our core. We know the journey from concept to first location and we know the challenges and struggles that accompany growth from first to second unit, and we understand them intimately. We hope to create a lifetime worth of success and inspire other concepts to never give up on themselves.”

For more on Saigon Hustle and how it plans to bring Vietnamese flavors to more communities across America, stay tuned for the next episode of Take-Away with Sam Oches, airing July 28.