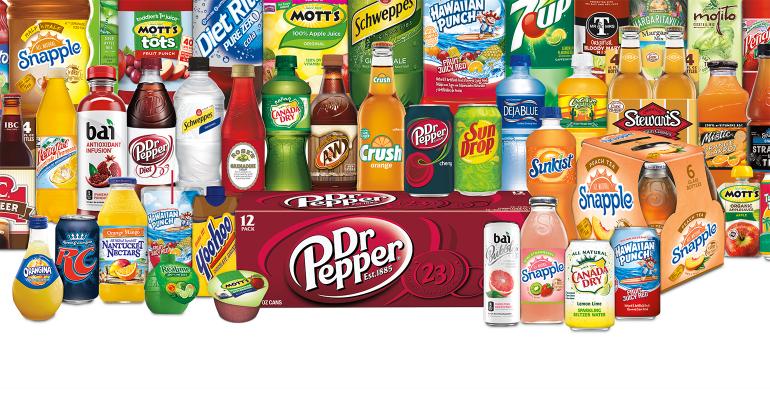 Waterbury, Vt.-based Keurig is owned by JAB Holding Co., a global investment firm based in Austria that owns several other beverage and restaurant brands, including Caribou Coffee, Au Bon Pain and Panera Bread. Under the terms of the agreement, which has been unanimously approved by the Dr Pepper Snapple board of directors, Dr Pepper Snapple shareholders will receive $103.75 per share in a special cash dividend and retain 13 percent of the company. Mondelez International, JAB’s partner in Keurig, will hold an approximately 13%-14% stake in the combined company.

“This transaction will deliver significant and immediate value to our shareholders, along with the opportunity to participate in the long-term upside potential of our combined company and attract new brands and beverage categories to our platform in a fast-changing industry landscape,” Larry Young, president and CEO of Plano, Texas-based Dr Pepper Snapple Group, said in a statement. “We are excited to combine with Keurig to build on the rich heritage and expertise of both companies and provide the highest-quality hot and cold beverages to satisfy every consumer throughout the day.”

In a statement, Bob Gamgort, Keurig’s CEO, said, “Our view of the industry through the lens of consumer needs, versus traditional manufacturer-defined segments, unlocks the opportunity to combine hot and cold beverages and create a platform to increase exposure to high-growth formats. The combination of Dr Pepper Snapple with Keurig will create a new scale beverage company which addresses today’s consumer needs, with a powerful platform of consumer brands and an unparalleled distribution capability to reach virtually every consumer, everywhere.”

According to Darren Seifer, food and beverage industry analyst at NPD Group in New York, JAB Holding Co. has been on a beverage acquisition binge for the last few years, primarily in the coffee arena. “What it looks like they are trying to do is to get to that scale where they can get purchasing power, but also power within the sell-through side as well,” Seifer told Supermarket News. “When you are talking about grocery, they can tell retailers we cannot only bring you a diversified set of coffee blends, but we are also in other aisles too, and bring some more of that selling power as kind of a unified front as well.”

While Keurig Dr Pepper will have $11 billion in annual sales, it still falls short of PepsiCo with 2016 sales of $63 billion and Coca-Cola, which had 2016 sales of $41 billion. “It looks like if they wanted to compete they knew they needed some larger scale,” Seifer said.

The beverages will also tie in well with the company’s restaurant business.

“A logical next step for them will be since they have these products, what is a good portal through which we can sell them within our own portfolio? It would make sense that if you have these massive outlets through which your products would sell that you would take advantage of that,” Seifer said.

“This makes Keurig a broader, more comprehensive beverage company across all the key non-alcoholic categories,” said Gary Hemphill, managing director of research at Beverage Marketing Corp. in New York. “Obviously, Dr Pepper is very successful in carbonated soft drinks and some of the other key categories. This brings coffee and some tea brands into their portfolio. It also marries Dr Pepper Snapple with the technology and knowledge that Keurig has really pioneered in home consumption with the single-cup brewing system, which they may be able to broaden across other categories in the future.”

“We are very excited about the prospect of KDP becoming a challenger in the beverage industry,” Bart Becht, partner and chairman of JAB Holding Co. and chairman of Keurig, said in a statement. “Management’s proven operational and integration track record along with their commitment to innovation and potential future brand consolidation opportunities, while maintaining an investment grade rating, positions the company well for long-term success and material shareholder value creation,” he said.

Keurig and Dr Pepper Snapple will continue to operate out of their current locations, and Bob Gamgort, CEO of the combined company, will be based in Burlington, Mass.