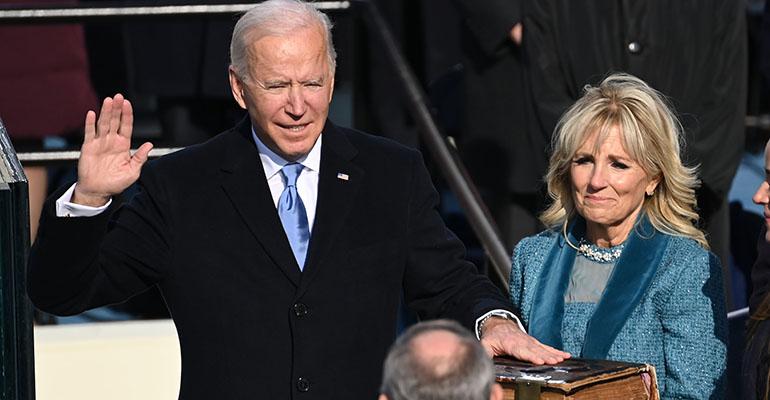 Pool / Pool / Getty Images News
Joe Biden was inaugurated on Wednesday as the nation’s 46th president and one of his first moves was to introduce a comprehensive bill to modernize the U.S. immigration system.
News

U.S. Citizenship Act of 2021 seeks to create a path to citizenship for many undocumented workers

Joe Biden was inaugurated on Wednesday as the nation’s 46th president and one of his first moves was to introduce a comprehensive bill to modernize the U.S. immigration system.

The U.S. Citizenship Act of 2021 is designed to create a path to citizenship for some of the nearly 11 million undocumented immigrants in the U.S., many of whom work in the restaurant and agricultural industries.

Outlined in a four-page summary that was shared with the media, the Citizenship Act is designed to mark a sharp pivot from the tone of the Trump administration, which was staunchly anti-immigrant, leaving many living in fear of workforce raids and deportation while Trump was in office.

Under the bill, certain undocumented immigrants would be able to apply for temporary legal status with the ability to apply for a green card after five years if they pass criminal and security background checks and pay taxes.

Dreamers who were brought to the U.S. as children, certain immigrant farm workers and those under protected legal status would be immediately eligible for green cards and could be eligible for citizenship after three years after passing background checks.

The bill also offers reforms to reunify families, and protections for orphans, widows and Filipino veterans who fought alongside the U.S. during World War II. It prohibits discrimination based on religion, offers funding for state and local immigrant and refugee support programs and eliminates some hurdles for work-related green cards.

The proposed Citizenship Act also calls for a commission to improve the employment verification process, and it increases penalties for employers who violate labor laws.

In a policy pledge outlining plans for his first 100 days in office, Biden argued that “a modern immigration system must allow our economy to grow, while protecting the rights, wages and working conditions of all workers, and holding employers accountable if they don’t play by the rules.

“Immigrant rights and worker rights are deeply connected,” the policy plan continued. “We must ensure that every worker is protected, can join a union, and can exercise their labor rights — regardless of immigration status — for the safety of all workers.”

The President also pledged to end workforce raids “to ensure that threats based on workers’ status do not interfere with their ability to organize and improve their wages and working conditions.” Rather, immigration enforcement would target those who are threats to public safety and national security, while those that have never been convicted of a serious crime would receive due process.

The sweeping bill is likely to face opposition as is in Congress, though Democrats hold a tie-breaking majority. On Tuesday, Sen. Marco Rubio (R-Fla.) reportedly called the bill a “non-starter,” saying it offered “blanket amnesty for people who are here unlawfully.”

The National Restaurant Association, however, has long advocated for comprehensive immigration reform. In a statement Wednesday, Sean Kennedy, the association's executive vice president of public affairs, applauded Biden for making it a top priority.

"The restaurant industry today reflects the cultural traditions and hard work of immigrants who come to America seeking a better life. They add to the vast diversity that makes our smallest to largest restaurants cornerstones of their communities," he said. "We encourage Congress and the Administration to provide a pathway for legalization; create an effective essential worker program to meet workforce needs; secure our borders while facilitating efficient travel and tourism; and implement a reliable federal employment verification program."

The proposed legislation was embraced by the United Farm Workers who, in a statement, said Biden’s bill is fundamentally different than any attempted by a president before.

“President Biden will immediately stop deporting those who harvest the food we eat,” said Diana Tellefson Torres, UFW Foundation executive director. “We are elated to know farm workers are being honored on Day One.”

Likewise, the Small Business Majority founder and CEO John Arensmeyer said in a statement Wednesday that immigrants create one in 10 jobs in the U.S. as small business owners.

"We need leaders who recognize that immigrants are the lifeblood of American entrepreneurship — they work for small businesses, start small businesses and bolster our economic success," Arensmeyer said. "Immigrants are among America's most prolific small business owners who strengthen our economy and contribute to the diversity of our workforce, which is why it's critical to reverse archaic policies that severed our immigration system."