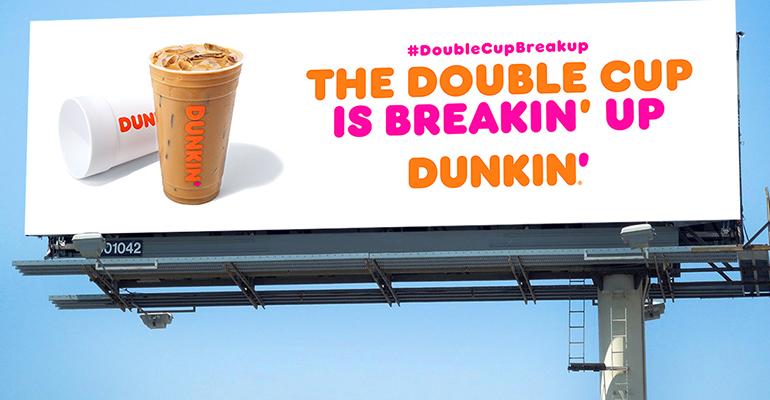 The end of double-cupping is here, says Dunkin’

But it’s a “conscious un-cup-ling”

Double-cupping, or the practice of serving an iced coffee in a plastic cup placed in a Styrofoam cup, has been popular at Dunkin’ restaurants in New England for years. But it’s got to stop, says the Canton, Mass.-based brand.

“Change is difficult for folks,” said Dunkin’ COO Scott Murphy. "Still, it is the right thing to do, but we have some die-hard fans that are pretty upset. It’s a very polarizing topic,”

Related: This is a 'different' Dunkin,' says CEO

As part of the company’s ongoing plan to phase out all polystyrene foam cups from its supply chain by 2020, Dunkin’ announced that as of December 1st, all of its restaurants in New England will be fully transitioned to the double-walled paper cup. Dunkin’s in many other parts of the country have already phased out foam cups.

The double-walled paper cups offers heat retention properties that are equal to its foam cup and are made of paperboard certified by the Sustainable Forestry Initiative Standard, the brand said. It can do everything the old cup can do, except hold a plastic cup of Dunkin’ iced coffee.

Related: Dunkin’ ‘cracks the code’ with its holiday cups

According to Murphy, double-cupping started with franchisees who wanted to help customers with their cold hands or the dripping condensation that comes with an iced drink.

Dunkin’ strategically choose this time of year as its when customers, particularly those in New England, are switching from iced to hot beverages, said Murphy. 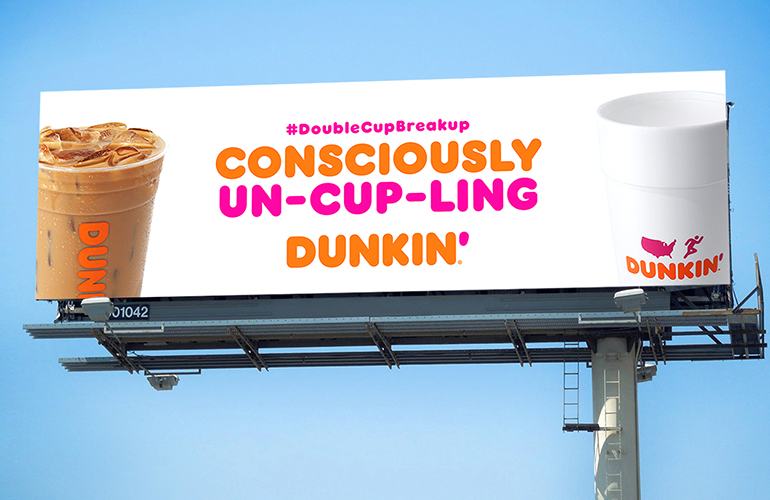 The new cups are a bit more expensive than the foam ones, Murphy said. Dunkin’ has franchisees buy-in for the new cup, although he has noticed a few larger orders for foam cups over the past few weeks, and he thinks some stores will try to hold out for a bit longer before transitioning.

To ease the transition, Dunkin’ is selling and giving away koozies and has come out with a quirky ad campaign. Billboards across Providence, R.I. and Boson, Mass. include phrases like “consciously un-cup-ling” and “Iced. Delicious. And Single.”

“It takes a serious issue and puts a little bit of humor on it,” said Murphy. “A very Dunkin’ approach.”