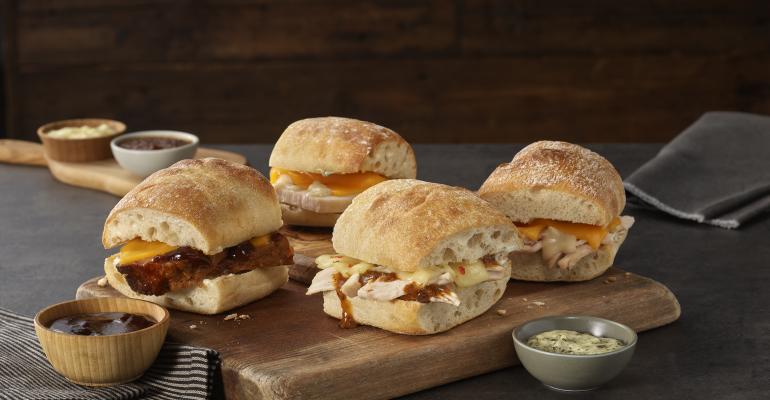 Boston Market also outlined major expansion goals with plans to open one store a week in 2021, including some 24-hour locations

Six months after Boston Market was purchased by Engage Brands of Rohan Group, the company has begun rolling out its revitalization plan, starting with a new late-night menu that will be available after 9 p.m. nationwide until midnight or later in some locations, starting Monday, Oct. 26. The menu of rotisserie sliders and bowls will be Boston Market’s first foray into the late-night daypart.

“The banner above our late-night program says, ‘light night: you never had it so good,’” Boston Market chief marketing officer Slaton Smith, who started at the company in May said. “Boston Market is providing late-night customers with something better than a greasy burger or discounted burger. We’re providing them with first-class ingredients. We believe the people want something better late at night.”

“We had a couple of restaurants see great success with late-night hours, and we wanted to extend that to attract newer and younger customers,” Smith said. “In July, we started putting together our program to address the late-night crowd. We wanted to offer food that was uniquely Boston Market and relevant to the night daypart. […] these sliders have unique flavors that you can’t get at other late-night places.”

Plans for the daypart were strongly influenced by the unique challenges and opportunities presented by the pandemic. Smith noted that during their late-night daypart, dining rooms will be closed, and only the drive-thru, takeout, and third-party delivery will be open, mirroring the off-premise trends that have grown exponentially since the March lockdowns nationwide. Smith also said that Boston Market’s menu is “uniquely positioned” to survive during these times of strong off-premise trends because of the hardiness of their food as delivery items.

“Boston Market has a really strong foundation from a food standpoint; it carries really well,” he said.

The new late-night menu was introduced alongside Boston Market’s COVID-era expansion plan. After closing 10% of all units in 2019, the company has “aggressive expansion plans” on the horizon, with plans to open one store per week in 2021, mostly in the company’s stronger markets like Philadelphia, New York, Texas, and the Southwest region. Smith said they are also looking at opening a few 24-hour locations in the Philadelphia metro area to expand upon their late-night daypart exploration.

But Boston Market’s goals moving forward are not just focused on midnight snacks and expanded footprints. Smith said that they have several ideas in the works for their core menu. Instead of expanding too much outside their lane, they will focus on perfecting and getting creative with their original rotisserie chicken, adding new products like rosemary lemon chicken and an expansion of their prime rib line in 2021.

He also mentioned that in 2021 Boston Market will be expanding their dessert line to go beyond typical after-dinner fast-casual offerings, similar to what you might find on a dessert menu in a fine-dining restaurant (though Smith would not expand further on what types of desserts Boston Market would be debuting). Other brand updates to look forward to would be an expansion of their loyalty program to improve engagement and functionality with new personalized rewards coming next year.

“We’re coming up with new products to attract new customers in the next year, and we’re refreshing our look and feel,” Smith said. “I see this brand as an iconic American brand. There’s a lot of places we can take Boston Market: if we focus on new products and opening new restaurants, all of these things together will make for a great future.”