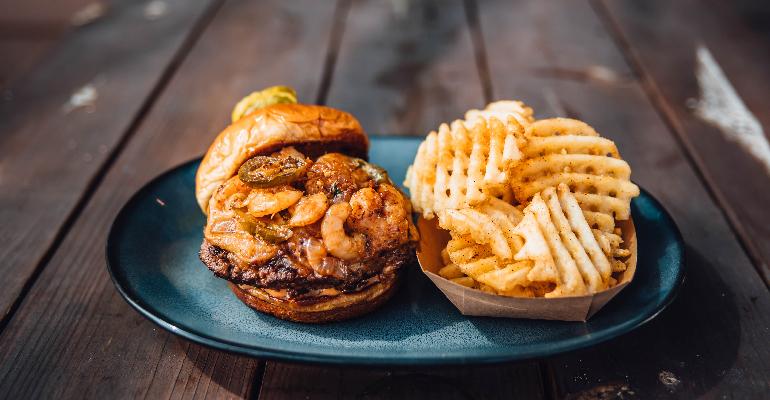 Walk-On’s Bistreaux and Bar conjures a very different vibe with its Cajun-inflected surf & turf burger with blackened shrimp, caramelized onions and pickled jalapenos on a brioche bun; and it’s available all year round.
Menu

Even as restaurateurs continue to grapple with the COVID curse of pared-down, takeout-only menus, they are also considering what consumers will crave as operations normalize. A strong value proposition will be critical, along with creative dishes that surprise, delight and help shut-ins shake off their housebound blues.

An existing menu item with a proven track record of patron popularity already fills that bill. Surf & turf — the classic steak-and-lobster combination — is a throwback to 1960’s-style Continental cuisine, and it offers plenty of opportunity for culinary reinvention, including alternative proteins, flavor profiles and accompaniments.

As a quick note — some of the menu items mentioned below might not be available right now due to coronavirus-related store closures and menu simplifications.

Upscale-casual luxe. Many chefs are adding unexpected flourishes that update the standard and increase its allure. At Ocean Prime, the 16-unit, seafood-steaks-cocktail emporium, sophisticated touches distinguish both the surf & turf appetizer made with scallops, braised short rib and gremolata and the surf & turf entrée. Although the latter is made with the conventional steak and lobster tail, it is plated unconventionally with a gouda potato cake, chile-seared spinach, cabernet truffle reduction and béarnaise.

American Cut, a new-age steakhouse operating four locations in Atlanta, Atlantic City and New York, takes a more laid-back, DIY approach with its menu of enhancements and surf options that can top any steak and include chile lobster, shrimp scampi and crab oscar.

The Cheesecake Factory offers similar mix-and-match options with its factory combinations that invite diners to choose two items from among Herb-Crusted Salmon or Shrimp Scampi on the surf side and Chicken Madeira or steak diane on the turf side. 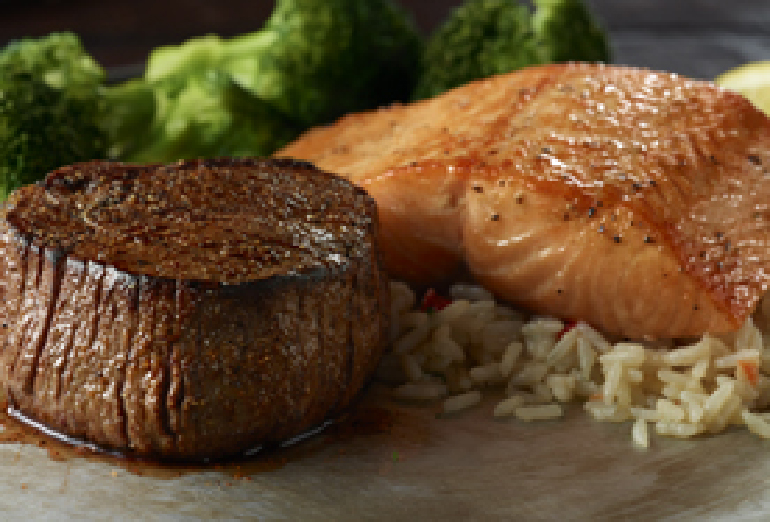 This spring, Bennigan’s demonstrated its Irish hospitality with the Blarney Blast menu that invited guests to celebrate St. Patrick’s Day with a special Paddy’s Grilled Chicken and Shrimp finished with Irish whiskey glaze and served with crispy fried onions.

By contrast, Walk-On’s Bistreaux and Bar conjures a very different vibe with its Cajun-inflected surf & turf burger with blackened shrimp, caramelized onions and pickled jalapenos on a brioche bun; and it’s available all year round.

Sushi specialists are designing their own dynamic duos too. At the Cincinnati-based, 10-unit Fusian Sushi, diners can create rolls to taste or opt for a signature surf & turf, an inside-out roll with steak, crab, asparagus, cucumber and wasabi mayo. Similarly, Sushi Boss, with two locations in Indianapolis, allows customers to customize their rolls or choose a house special like the Surf and Turf Roll made with marinated short rib, crabstick, yakisoba sauce and sesame chile.

Looking ahead, unexpected updates on the classic will offer myriad opportunities to lure diners. Watch for further innovation in the form of vegan and vegetarian versions and even desserts.