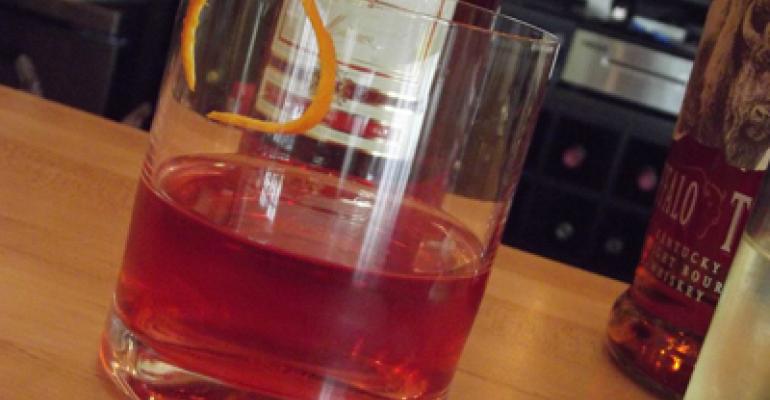 Moderno, a month-old restaurant in the Chicago suburb of Highland Park, Ill., pays homage to the traditions of Italian cuisine while judiciously applying modern touches. It is pleasing patrons with signature cocktails like the Tuscan Iced Tea, the Modern ’hattan, and the “bungled” Negroni.

The developer of the cocktail list, assistant general manager Andrew Morgan, favors complex Italian vermouths and bitter herbal liqueurs called amaros over sweeter ingredients in his drinks, softening them a bit to suit the American palate.

“There is a reason the French and Italians and many other cultures have been drinking these products for centuries,” said Morgan. “It really does have a profound effect on the overall experience of the meal, especially if you have had a few too many bites and feel overstuffed.”

One of the popular libations is Tuscan Iced Tea, a medley of the bittersweet vermouth Punt e Mes, an herbal aperitif called Aperol, Italian bottled lemonade, cucumber and lemon. The cucumber is muddled with a dash of bitters, shaken with the liquors, strained over ice and topped with the lemonade. The latter ingredient “lightens it up, adds a nice tartness and slight sweetness, and makes it something you could practically drink by the pitcher,” Morgan said.

He said the low-alcohol libation resembles the Arnold Palmer, the combination of lemonade and iced tea named for the legendary golfer. “In fact, I looked for a famous Italian golfer to name it after, but decided it wouldn’t translate well,” he said.

Riffing on cocktails is consistent with Moderno’s culinary approach. Chef-proprietor John des Rosiers and executive chef Phil Rubino avoid chicken Parmigiana, Caesar salad and other clichés of Italian restaurant fare. They limit dishes to no more than five ingredients in authentic Italian style but feel free to add tweaks that are modern or unique.

Thus blueberries keep company with linguini, English peas, house-made pancetta and sheep milk cheese in one dish, while limoncello and coconut milk are harmonious additions to roasted mussels in another.

“People for the most part are thankful that a restaurant like Moderno has come to the suburbs,” Morgan said.

A favorite of Moderno’s cocktails is a twist on the Negroni, the classic combination of gin, Campari and sweet vermouth. The Negroni Sbagliati — the term means “bungled” in Italian, Morgan said — came about according to legend when an Italian bartender mistakenly poured sparkling wine rather than gin. Morgan uses prosecco in his version.

“It lightens the drink, makes it a little sweeter and invites people to develop the bitter part of their palates,” Morgan said. “I thought it would be a niche cocktail, but actually a wide array of people are enjoying it.”

The Modern ‘hattan is his riff on the traditional Manhattan, made with spicy American rye whiskey, full-bodied Carpano Antica sweet vermouth, Demerara sugar simple syrup and a dash of bitters.

“We serve it ‘up,’ so it doesn’t get diluted over time and it keeps its depth and spice and herbaceousness,” Morgan said. “We’re going for great balance here, nothing extreme.”

Another take on the Manhattan is The Modernier, made with bourbon, Campari, an Italian vermouth-like aperitif called Cocchi Americano, and orange.