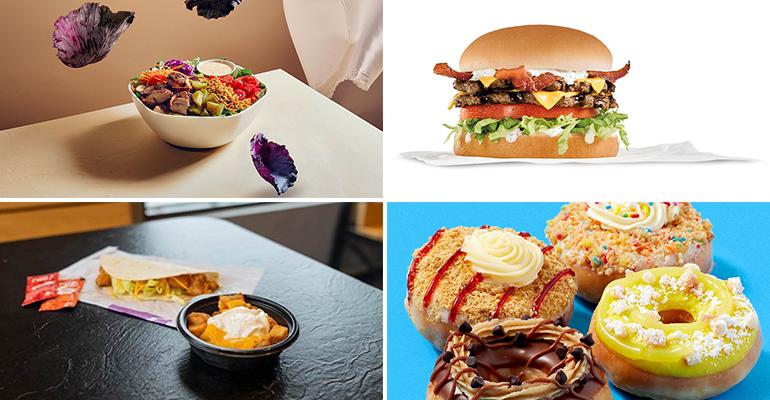 Taco Bell’s Potato Bites are back. They were removed early in the pandemic as the chain moved to streamline its menu — and that did improve throughput — but the people have spoken, and they want their potatoes.

Applebee’s Neighborhood Grill & Bar is bucking the concept of hot drinks in the winter and instead leaning into the cold months with a couple of chilled cocktails that they’ve dubbed “Snowy Sips.”

BJ’s Restaurant & Brewhouse has added to its family meal options with prime rib, and Kona Grill has added a new daypart: Brunch.

Have you ever wished your chicken wings tasted like cinnamon candy? Well, if you have, then Smokey Bones has the answer with its new sauce.

If you’d rather that your wings not have any chicken in them, well, sister brands Fatburger and Buffalo’s Express have you covered with their new Vings.

Elsewhere in vegan news, Lion’s Choice has a new black bean soup and Cava has a Lentil Avocado Bowl.

If you’re looking for more chicken, MOD Pizza is topping its limited-time pizza with chicken sausage, and Papa Murphy’s is topping its LTO with grilled chicken in Alfredo sauce.

There are no new fried chicken sandwiches this week, but Sweetgreen is trying to mimic it with a salad that has grilled chicken and crispy rice, along with pickles and a new rémoulade.

Qdoba Mexican Eats is offering a bunch of curated  low-calorie creations for the new year, and Old Chicago Pizza & Taproom is hopping on the cauliflower crust bandwagon.

Errors in the dates of availability of the Sweetgreen salads and of the name of Harper Watters' bowl have been corrected.
Start Slideshow ›
TAGS: Fast Casual Quick Service
0 comments
Hide comments
Related
Sponsored