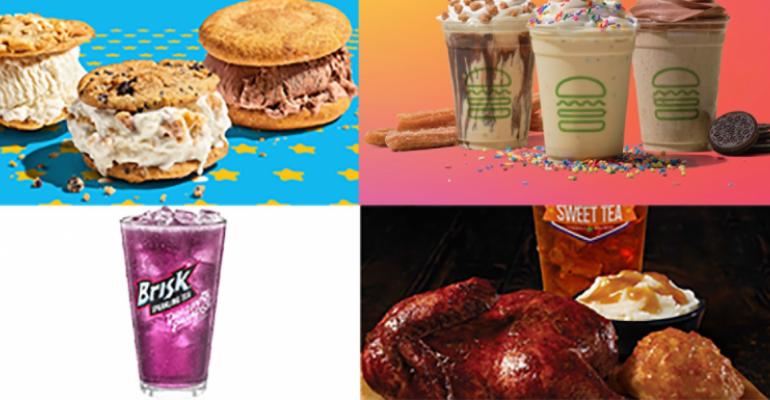 June is Pride month for the LGBTQ community. You might be wondering why it’s called “Pride” instead of more frequently used terms like “awareness.” That’s because, while many LGBTQ people face discrimination and bullying, perhaps the most damaging effect is shame from being so different from mainstream society. The dangers of that can be real: Suicide attempts among LGBTQ youth is reportedly around double that among teens overall, which is why organizations such as The Trevor Project, a suicide-prevention and crisis intervention group for young members of sexual minorities, is so important, as is instilling pride in people who are struggling with their identity.

So for Pride month, Shake Shack is donating 3% of its proceeds from its three celebratory shakes to The Trevor Project, while Fuku is donating sales of its Pride Sando to the Hetrick-Martin Institute, which provides aid to LGBTQ youth.

Voodoo Doughnut is marking the occasion with a Pride Bar and donating money to the It Gets Better Project.

Menchie’s Frozen Yogurt, meanwhile, is teaming with the Japanese candy brand Hi-Chew for its Rainbow Sherbet flavor, which sure sounds like it’s Pride-related, but the company says it’s doing it because June is also National Candy Month.

It’s okay, Menchie’s; coming out is a journey.

Watermelon is once again the trending fruit of the summer, and this week alone new items made with the fruit are available from, Halal Guys, Hot Dog on a Stick, Jamba, Nekter Juice Bar, Tropical Smoothie Café and possibly Piada Italian Street Food, which is offering a “summer melon fresca,” but doesn’t specify what melons.

Taco Bell has introduced the first sparkling tea from Brisk.

Church’s Chicken is bringing back its smoked product, Gott’s Roadside is reprising its Baja Shrimp Cocktail, Wings Over has brought back its honey hot sauce, and Zaxby’s fried pickles are now a permanent part of the menu.

The Counter has a doughnut burger and a milkshake to match, Bruster’s Real Ice Cream has wedding cake ice cream and banana pudding, Peter Piper Pizza has churros, and Insomnia Cookies has a whole lineup of late-spring treats.

Dog Haus has a new hot chicken sandwich and Hopdoddy has a barbecue chicken “burger.”

Sunny Street Café has a whole new lineup for the summer, plus cocktails, Pizza Ranch has a Caprese pizza, Jinya Ramen Bar has a new bar snack and Velvet Taco is kicking off the month with what it promises to be a string of salad-related Weekly Taco Features.