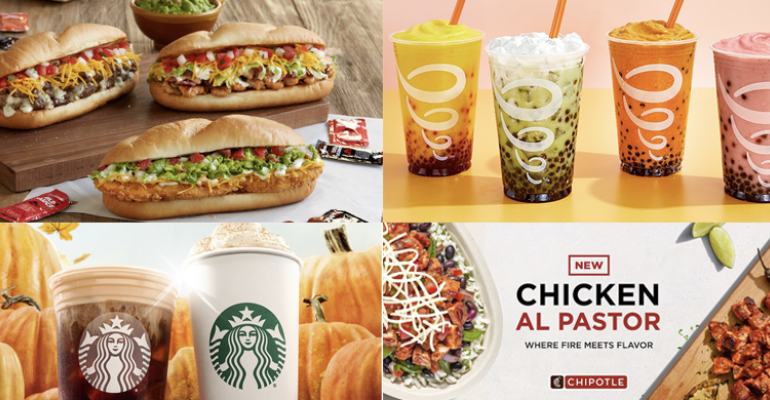 Okay, now it’s really pumpkin spice season: Starbucks’ mother of all Pumpkin Spice Lattes is back for the 19thyear, accompanied by a relative newcomer, the Apple Crisp Macchiato from last year, now made with oat milk.

Black Bear Coffee Bar has a new seasonal lineup, with cranberries, caramel and apples as well as pumpkin, and Smoothie King has pumpkin drinks for the fall, plus espresso and cold brew coffee as permanent new options.

Chipotle, meanwhile, is testing a new chicken option, Cousins Subs has brought back its Cubano for a limited time, which is also what Papa Murphy’s has done with its Triple Pepp Pizza.

Baja Fresh has given plant-based protein a permanent spot on the menu, Del Taco has done the same thing with tortas, and Golden Chick now offers wings at all of its restaurants.

Baskin-Robbins has a brand new flavor of the month, Jamba has boba, and The Habit Burger Grill has roasted cauliflower.

Miller’s Ale House has nine new permanent additions to the menu, Smokey Bones has a seasonal lineup, and Macaroni Grill is offering items made with Buffalo chicken.

La Madeleine has a caramel apple Danish, Tropical Smoothie Cafe has a chicken flatbread, and Velvet Taco’s Weekly Taco Feature is made with barbecue chicken.