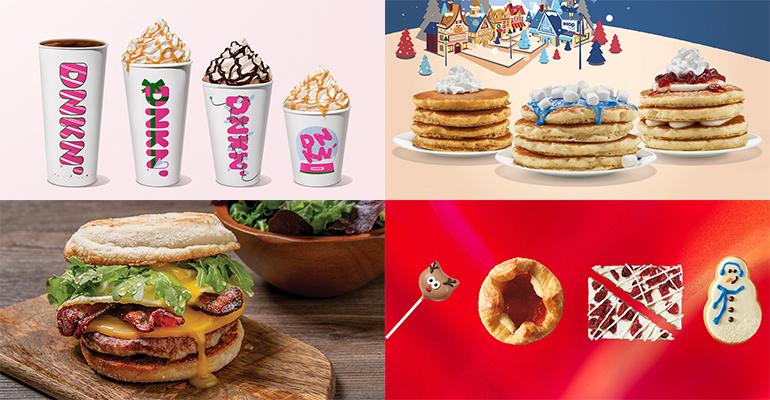 You might think Starbucks would be satisfied with the success of its Pumpkin Spice Latte (although it’s good that they’re not considering that the coffee chain’s Pumpkin Cream Cold Brew outsold the PSL last year), but the Seattle-based giant’s innovation train continues, this season with a drink flavored with sugar cookies and almond milk.

Of course, Starbucks isn’t alone in its holiday innovation. Although Caribou Coffee is simply bringing back favorites from the past, Dunkin’ has new chocolatey beverages (and sister chain Baskin-Robbins has a new snickerdoodle chai ice cream), Scooter’s Coffee has a new addition to its Caramelicious line and Dutch Bros has a new seasonal iced drink.

This is also citrus season, which Smoothie King is celebrating with an orange-juice-based immunity booster.

Clean Juice, meanwhile, has new apple options and Main Squeeze Juice Co. has a pumpkin spice latte with MCT oil, because that’s how it rolls.

Speaking of rolls, Pizza Guys has new garlicky ones and First Watch has some with caramel, pecan and cinnamon.

Chili’s added one of those over the summer and now it’s part of its expanding Big Mouth lineup, which as of this week now has four new burgers.

Chipotle is testing chicken asada in a couple of markets, and Torchy’s Tacos monthly special has chicken stewed in New Mexican red chile.

Moe’s Southwest Grill has brought back its Loaded Steak & Potato Burrito, but now it also has a Loaded Potato side dish.

Chopt is celebrating the launch of Jessica Seinfeld’s new cookbook with a vegan salad.

Taziki’s has its own version of grilled cheese with tomato soup, and Velvet Taco’s weekly special is a taco version of jambalaya, but with fried crawfish.