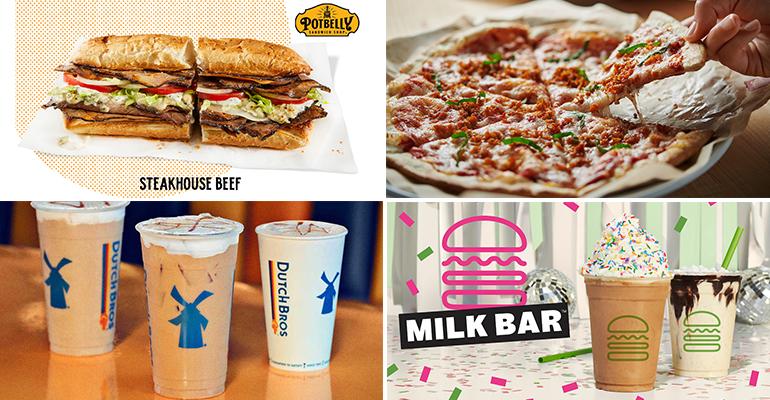 In other burgeoning trends, we have a collab between two New York City chains with cult followings — Shake Shack and Milk Bar —a celebrity tie-in at Andy’s Frozen Custard, plant-based protein at MOD Pizza, wings for the first time at Tijuana Flats and, in the theme of all-day breakfast, treats inspired by the morning meal at Insomnia Cookies.

In a trend that might not make it (although you never know), sister chains Buffalo’s Café and Hurricane Grill & Wings now offer burgers with peanut butter on them.

Oh, and in pumpkin spice we have new items from Caribou Coffee, Dutch Bros Coffee and Scooter’s Coffee.

Lazy Dog Restaurant & Bar has extended its line of frozen TV dinners, and its virtual brand, Jolene’s Wings & Beer, has added pull-apart pizza to its offerings.

Cousins Subs is bringing back its Muenster line, and Potbelly Sandwich Shop has reformulated its sandwich offerings to make them bigger mostly, while also adding three entirely new sandwiches

Tropical Smoothie Cafe has a new drink with chia seeds, Voodoo Doughnut has a dessert dusted in espresso, Torchy’s Tacos is bringing back its Tailgater as the September Taco of the month (just as it was last September), and Velvet Taco’s Weekly Taco Feature has a chile-fig salad.