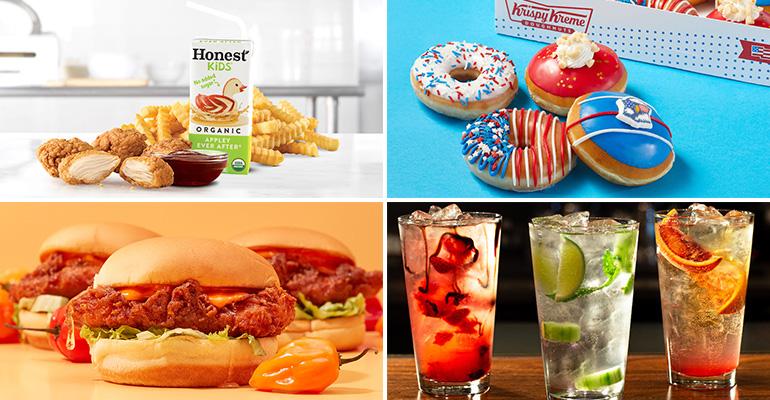 For the first time, Arby’s has chicken nuggets, which is available as part of its new kids meal as well as on its own.

Elsewhere in chicken, Shake Shack is celebrating the summer by adding hot honey to its chicken and also selling cocktail-inspired soft drinks, Smokey Bones has introduce fried chicken sandwiches to its two virtual brands, Whataburger has a new chicken sandwich with pico de gallo, Newk’s Eatery is dressing chicken in its signature white barbecue sauce and Cava has a new preserved lemon vinaigrette that it’s showcasing in a chicken bowl.

Krispy Kreme and Tim Hortons are celebrating Independence day with festive doughnuts, Insomnia Cookies is doing it with a special cookie, and Eureka! has a red, white and blue cocktail.

It’s a big week for new drinks, which are also available at Dutch Bros, El Torito, Freddy’s Frozen Custard and Steakburgers, Gordon Biersch and Studio Movie Grill, as well as the nation’s three Starbucks Reserve Roastery locations, which are offering a new lineup of spritzes.

Kung Fu Tea is experimenting with a soft serve-boba combination at its flaghsip location, and Baskin-Robbins is expanding its line of Creature Creations that were launched last summer. Fired Pie is bringing back its Elote Pizza, Pie Five has a new stuffed crust coated with baked Parmesan cheese and Garbanzo Mediterranean Fresh is continuing to introduce new flavored falafel.

Moe’s Southwest Grill has a brand new type of handheld item made with a taco shell wrapped in a tortilla with its new Buffalo queso sandwiched in between.

Voodoo Doughnut has a seasonal horchata-flavored treat, and the Weekly Taco Feature at Velvet Taco has fried green tomatoes.