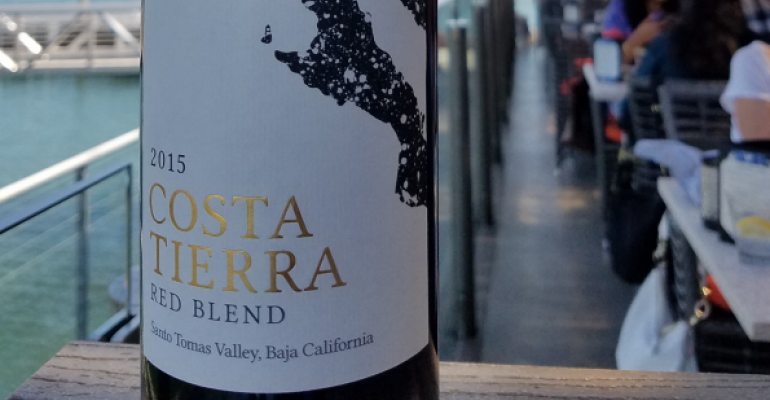 At Cohn Restaurants he works with local beer and wine producers from both sides of the border with Mexico to develop unique drinks for his guests. That includes Costa Tierra, which he calls “a taco wine” because it’s intended to pair well with Mexican food.

Well, Baja’s very different from San Diego, because Baja’s very hot, and their soils are very sandy, and they have a lack of water there. Whereas in San Diego we have high elevation and soils that are sand and granite, so there’s excellent drainage.

So the grapes grow more slowly than in Baja because of the altitude and cooler climate?

Yes. In Baja they tend to ripen really quickly. They do some unique red blends that you won’t be able to find anywhere else because you’re not going to have Sangiovese, Nebbiolo and Petite Sirah that tastes like [it does in Baja California] anywhere else in the world, because it’s a unique growing region.

In San Diego, you see people planting Cabernet [sauvignon] and Merlot, but what should be growing here are the Sangioveses, the Barbera, the southern Rhone varietals [such as Syrah and Grenache]. These tend to do really well. It’s a little warmer [than most wine growing regions] but we have a coolness from the ocean air, and it gives us good acidity.

I’d think you also get a lot of sunshine, so do the grapes ripen quickly and have a lot of fruity flavor?

This year they were harvesting in August. There were some people who were pulling things out in July, so we did get a lot of sun and they do ripen fairly quickly, but there are also areas at higher elevation where they harvest in mid-September. That’s always good because you have more fruit. But one issue we have in San Diego is we don’t yet have outside winemakers coming in.

There are some very very good local winemakers but there are others that are not so good, because they’re still mom-and-pop places that want to have a tasting room and a winery but have never made wine before.

There’s also a huge movement of natural wine makers here. There’s a group of four or five guys who focus on making wine naturally, and they feel that they can because the fruit lends itself to be made that way in San Diego. And they try to use minimal sulfites and other additives and let the wine kind of be what it is. Sometimes the wines are fantastic, and sometimes they’re really geeky, really out there — great for a sommelier but not for the average consumer.

Barbera, Tempranillo and Syrah. Where would you ever see a blend like that? But it works in Baja because [the grapes] show themselves very differently there.

I chose those grapes because wine making in Baja California came in three waves. The first was Spanish, which is the Tempranillo. The second wave was Italians, so we have the Barbera for that. And the third was in the 1960s and ’70s when we had natives from California [planting] Cabernet and Merlot. So I tried to make a blend that [reflected] Baja’s history and also create a wine that was going to be fruity and juicy but have tannin and backbone with acidity. So Barbera has the acid, the Tempranillo has plenty of tannin, and the Syrah gave it the color, the body and the roundness.

If you think of pairing [wine with] food from Mexico, it’s really difficult because it’s spicy, it has char and all this stuff on there. Most wines can’t stand up to that. They can get bitter, and the heat [from chiles] intensifies. So I needed a wine to be fruity and juicy to counterbalance the heat, and at the same time have something to go with a carne asada steak, which is grilled and charred.

So that was my idea, to create a taco wine — a simple, easy drinking wine. It’s definitely tannic and definitely has fruitiness in it, and that’s what it’s all about.

We use some of the distillery’s product, but some of them are fairly new and they’re aging their whiskeys and rums. It won’t be for another three or four years that I can get some of their barrels, but eventually I would like to use barrels to make beers.

We went down to Tequila and chose barrels from tequila companies there. My intention was to use tequila in barrels for our cocktails, and then use those barrels to make beer.

However the United States government will not allow us to bring tequila barrels across the border without them being sprayed or treated for pesticides or fungicides. So you can’t really age beer in them at that point.

But since there are breweries in Tijuana my idea was to have them do the barrel aging for us. I’m still waiting for that project to start.