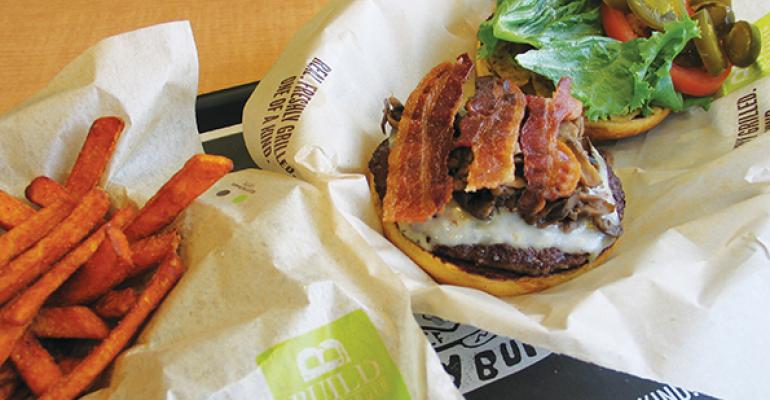 The brand aims to offer fast-casual-style quality and experience with its Build Your Burger platform.

As McDonald’s Corp. attempts to turn around slumping sales, company officials are pointing to one change that may become a fundamental aspect of the brand’s future: customization.

McDonald’s is testing a Build Your Burger platform in four Southern California locations that lets customers create their own meal in the fast-casual style of better-burger competitors like Five Guys.

By using a touchscreen kiosk or ordering at the counter, customers can create a burger the way they want it, choosing the number of patties, the style of bun, the type of cheese, and 17 toppings and sauces, with a surprisingly premium result that would stack up against any number of casual or fast-casual better-burger brands.

“Customers want to personalize their meals with locally relevant ingredients,” Thompson said. “They also want to enjoy eating in a contemporary, inviting atmosphere. And they want choices: choices in how they order; choices in what they order and how they’re served.”

Though the company has not said whether the “Create Your Taste” platform will go national, it is expanding. Thompson said Build Your Burger will be fully activated in three markets by the third quarter of 2015.

After a recent visit to a test unit in Laguna Niguel, Calif., the Build Your Burger program appeared to be a potential game changer.

Two sleek kiosks stood near the restaurant entryway, where a host was available to help customers navigate the technology and the options.

Customers can select the number of beef patties they want — single or double — the same patty used for a Quarter Pounder.

The bun selection includes a seeded option or buttered and toasted “artisan roll.” Applewood-smoked bacon can be added for 80 cents more.

In addition to the usual lettuce, tomato and pickles, a wide variety of additional toppings is available at no extra charge, including guacamole, grilled mushrooms, sliced jalapenos, caramelized grilled onion and chili-lime tortilla strips.

The unit is also testing sweet potato fries as an exclusive option with the Build Your Burger menu. Any item from the traditional menu can also be ordered from the kiosk.

Customers can pay with a slide of a card, and the kiosk generates a receipt and a number that the customer then clips to a tabletop stand. A runner delivers the food to the table.

The resulting burger appears dramatically different from McDonald’s standard sandwiches, one that will likely appeal to consumers looking for upgraded offerings. The toppings were plentiful, and the lettuce and tomato were crisp and fresh, in part because the burger arrived open, unlike the paper-wrapped versions on the traditional menu.

Customers can also build their burgers at the counter if they prefer not to use the kiosk. And for those who don’t want to build their own, three signature burgers with a premium build are also on the menu.

Prices will vary by market, and the pricing being tested at the Laguna Niguel location will not necessarily reflect what might come. But the test burger with one patty, three crisp strips of bacon and piled-on toppings was priced at $5.45, or $7.79 with a medium drink and sweet potato fries.

McDonald’s is also setting the stage for more menu variation based on regional preferences across its 14,000 U.S. units. The company recently moved from three regional divisions to four, giving regional leaders more autonomy in menu and marketing decisions.

Analyst David Tarantino of Robert W. Baird & Co. said in a report earlier this year that he visited a test unit and described the experience as “meaningfully different” from a typical McDonald’s.

“We came away from the experience intrigued by the opportunity to enhance customer perception related to ingredient quality and customization (particularly when considering the awareness that McDonald’s could bring to premium burgers with its advertising scale), although we also were somewhat surprised by the relatively high price points.”

Tarantino wrote that his burger was priced at $5.79, or $6.79 with bacon, “which were above the like-for-like prices that we found for comparable items at several better-burger restaurant chains within the same trade area.”

Restaurant consultant John Gordon of Pacific Management Consulting Group in San Diego said the Build Your Burger format could be a significant traffic-driver, though it may take time for the brand to convince customers to come into restaurants rather than ordering at the drive thru.

“Build Your Burger would put McDonald’s much closer to Wendy’s in terms of quality, and far out in advance of Burger King,” Gordon said.

What McDonald’s will roll out in the U.S. next year remains to be seen, and company officials declined to comment further at press time. It is planning further changes ahead.

A new ad campaign is reportedly brewing that may include a replacement for the “I’m Lovin’ It” tagline, possibly “Lovin’ Beats Hatin’ ” or “Lovin’ > Hatin’.”

The chain recently rolled out Apple Pay, even at its drive thru. And in January, Thompson said the company will simplify its menu to better highlight customer favorites and speed service.

“These things make up the McDonald’s experience of the future, and we’re building the future today,” Thompson said.