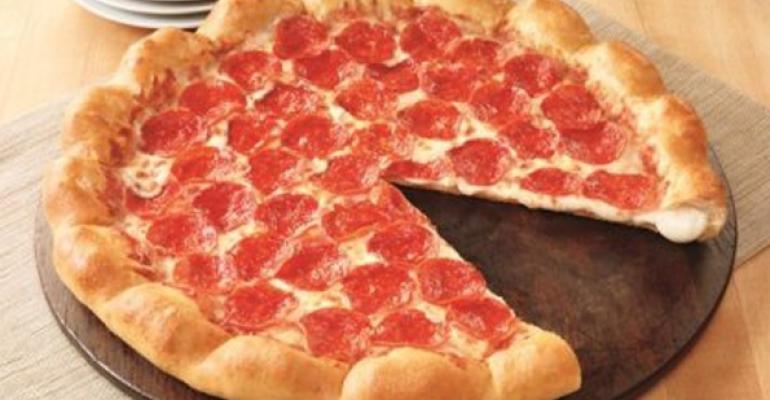 The latest BrandIndex data shows a spike in value scores for pizza chains during football season.

Among quick-service brands, the hamburger segment — with its prolific ad campaigns and low prices — maintains the highest average value perception, but the pizza segment has cut into that lead significantly, according to new data from YouGov BrandIndex.

The consumer perception research firm found that, from July 1 to Nov. 29, the average “value score” BrandIndex calculated for the pizza category rose steadily from its starting point significantly below scores for the hamburger, Mexican and chicken segments to finish just behind the hamburger category. At the end of that five-month span, hamburger chains and chicken brands finished with slightly lower value scores than their starting points, while the Mexican segment had the steepest decline and finished with the lowest category score.

BrandIndex calculates “value scores” by surveying thousands of American consumers each weekday about hundreds of brands, asking, “Does this brand give good value for what you pay?” Negative responses are subtracted from positive ones, and a moving average is calculated on a scale from negative 100 to positive 100, in which a zero rating denotes a neutral value perception.

The most significant conclusion BrandIndex could draw from the five months of data was the dramatic improvement for value scores in the pizza segment over time, which also tracked with a significant improvement in purchase consideration, which BrandIndex calculates from the percentage of respondents saying they likely would buy pizza in the near future.

“The value changes are interesting, but when you match it up with purchase consideration, that’s a stronger story for the pizza chains,” said Ted Marzilli, chief executive of New York-based BrandIndex. “They’re becoming a bigger part of people’s consideration sets.”

The pizza segment — comprised in BrandIndex’s research of Pizza Hut, Domino’s, Papa John’s and Little Caesars — started the measurement period well below other categories, with an average value score of 10.8 on July 1. By comparison, hamburgers, Mexican and chicken began the study with value scores of 17.7, 16.2 and 14.8, respectively.

Yet value scores for pizza players collectively climbed steadily through the fall, reaching 15.6 several days in November, before ending at 15.0 on Nov. 29. Not coincidentally, the segment improved dramatically during football season, when pizza brands increase their spending for national-TV advertising, Marzilli said.

“It’s a perfect match during football season, because pizza brands are hitting their target audience during a prime opportunity, and pizza companies deliver while people watch games from home,” Marzilli said. “The audience is tuned-in, available and hungry.”

The four brands in the category all improved their individual value scores during the five-month period, he added, with Pizza Hut finishing with the highest single score, followed by Little Caesars, which had the biggest improvement.

Those chains all have had aggressive deals in their advertising this year, including during the fall. Plano, Texas-based Pizza Hut promoted a $10 any-size, any-toppings deal for its traditional pizzas in addition to TV spots for its 3-Cheese Stuffed Crust pizza. Little Caesars’ commercials in October advertised its two low-price pizzas, the $5 Hot-N-Ready and the $8 Deep! Deep! Dish. The Detroit-based chain also is the title sponsor of a college football bowl game, the Little Caesars Pizza Bowl.

While Ann Arbor, Mich.-based Domino’s Pizza advertised its new “pizza profile” features of its online-ordering platform during the fall, its commercials nonetheless include the $5.99 price point for two medium, two-topping pizzas.

Louisville, Ky.-based Papa John’s, the official pizza sponsor of the National Football League, used its partnership with the NFL not only for branding purposes but also to promote aggressive discounts. The Thursday Night Fan Deal featured a new promotion for each week’s broadcast of Thursday Night Football on the NFL Network. The brand also shot several more commercials with its spokesman and Denver-area franchisee Peyton Manning.

Redefining value in other segments

The other three restaurant categories’ value scores followed less linear paths during the past five months than that of the pizza segment, BrandIndex found.

The hamburger segment, which included McDonald’s, Burger King, Wendy’s and other chains, reached its highest value score of 18.4 several times in July, before trending downward in August, back up in September and back down in late October. The category hit a low of 16.2 on Nov. 17 and finished at 16.5 on Nov. 29.

The Mexican segment fluctuated the most, reaching its peak of 17.4 on July 7, before declining steadily to a low of 12.5 on Aug. 31. The category’s score recovered somewhat to 15.6 on Oct. 16 before turning negative again and ending at 13.7 on Nov. 29. In BrandIndex’s study, the Mexican segment included quick-service leader Taco Bell, as well as fast-casual brands like Chipotle Mexican Grill and Qdoba Mexican Grill, which have far different value propositions than Taco Bell.

Similarly, the chicken segment in the report comprised quick-service chain KFC, a relatively heavy advertiser, as well as Chick-fil-A, which does less national advertising but relies on its positive reputation and devoted following in the Southeast, Marzilli said. The category also includes fast-casual chain Boston Market, and other fast feeders like Church’s Chicken or Popeyes Louisiana Kitchen.

The chicken segment’s value score peaked at 15.5 on July 8 and fluctuated between 13 to 15 for the rest of the period before finishing at 14.4 on Nov. 29. Price points varied widely across segments and brands in the study, Marzilli noted, from a $10 Weekend Bucket promoted at KFC during football weekends or $1 on a “Cravings Menu” Taco Bell tested in some cities this year, which competed with the higher average checks at Chipotle or Qdoba.

“The way we ask consumers about value makes it not a price question but about what you get in exchange for what you pay,” Marzilli noted. “Price is an important part of how they answer the question, but brands trying to provide more for a little more money is one way to improve value perceptions.”

However, recent advertising moves from some of the biggest brands show how difficult it can be to adjust consumers’ value perceptions beyond the lowest prices, Marzilli said. Often people are still conditioned to notice the lower price points circulating in ads within a segment, such as $5.99 in the pizza space or $1 among quick-service burger brands.

For instance, Oak Brook, Ill.-based McDonald’s rolled out its tiered Dollar Menu & More platform Nov. 4 and began national advertising for it Nov. 11, but McDonald’s individual value scores have trended down since the beginning of the month, Marzilli said. He stressed that it is still too early to draw conclusions about whether introducing $2 and $5 price points into a value menu will benefit the brand in the long-run, but for the moment, McDonald’s is taking a slight hit on its value perceptions, as is the whole burger segment.

“Whether McDonald’s can make it with the new Dollar Menu & More, we don’t know, but the early indications are it’s not resonating,” he said. “But again, it’s early.”