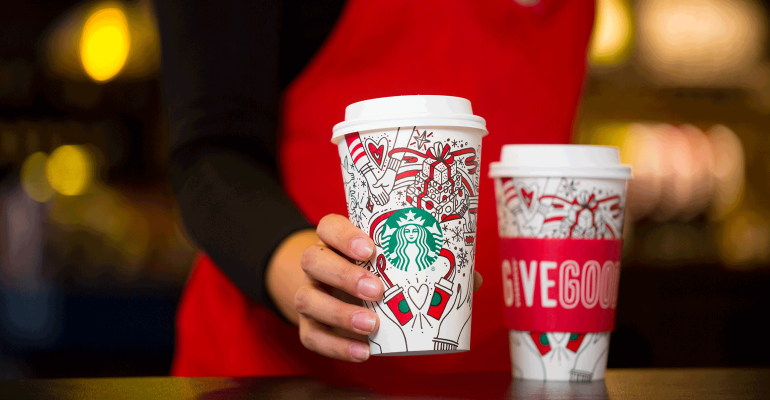 After the controversies around its annual holiday cups the past two years, Starbucks Corp. is letting customers have the final say in how their cups look this time around.

The Seattle-based coffee giant on Wednesday introduced annual holiday cups specifically designed to encourage customers to color the cups themselves. Prefer the red cup? Color it all red. Want a little more variety? Go grab the 64-pack of Crayola.

“We love the idea of everyone making this year’s cup their own,” Leanne Fremar, executive creative director for Starbucks, said in a statement.

Starbucks’ annual holiday cups have become something of a tradition marking the start of the unofficial holiday season on Nov. 1.

It’s also become a more recent tradition for the cups to generate controversy. Two years ago the chain introduced simple, red cups and critics said their simplicity was part of a “War on Christmas.”

Last year, the company introduced a green “unity cup” and some people didn’t like that, either.

So this year’s cup is a blank canvas — sort of. It features two holding hands, a Christmas tree, presents, ribbons, hearts and stars. It also includes a pair of hands holding red cups of coffee, and the cup features some splashes of green as well.

But most of the cup design features no color, and encourage customers to personalize the cups. So it’s like a coloring book. Only it’s a cup.

The company has previously encouraged customers to design their own cups. Last year, in addition to the infamous green cup, the company introduced red cups with 13 designs that customers created themselves.

This year’s cup features a red sleeve inviting customers to “Give Good,” which is the theme for Starbucks’ holiday campaign this year.