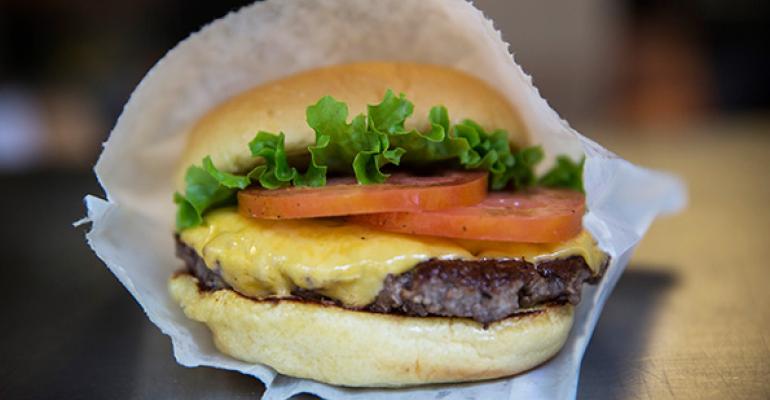 Burger chain Shake Shack is partnering with the delivery company Postmates to give away its signature ShackBurger to people who download the Postmates app. The giveaway is only available to new Postmates customers who, upon completion of their first order, will receive a $10 credit to put toward a ShackBurger. They and their friend must be within delivery distance of a Shake Shack and in one of the following markets: Atlanta, Austin, Baltimore, Boston, Chicago, Dallas, Houston, Las Vegas, Los Angeles, Miami, New York City, Orlando, Philadelphia, Phoenix, San Antonio and Washington, D.C.

A Postmates spokeswoman said such credit offers are common for people who refer others to the service.

“We’re thrilled to team up with an iconic brand like Shake Shack to bring our customers even more of what they want — on-demand,” said Russell Cook, Postmates’ senior vice president of operations, in a press release announcing the deal. “Shake Shack’s menu has developed a cult following from coast to coast, so we’re excited to let our customers share the Shake Shack love with their friends and family.

Shake Shack chief operating officer Zach Koff said, “We’re excited to collaborate with Postmates to offer guests yet another way to experience Shake Shack — when, where and how they want it.”

Delivery is becoming an increasingly important part of the restaurant business. Consumer research firm NPD in April reported that meal and snack delivery at the time represented 1.7 billion foodservice visits annually. It also said that 46 percent of all foodservice delivery orders were related to a deal involving virtual coupons or other discounts.

More than 80 percent of publicly traded restaurant chains, not counting pizza chains that already deliver, are at least testing delivery, according to their earnings calls and announcements.

This isn’t Shake Shack’s first app-related giveaway. When the 155-unit chain launched its own app in January, it gave a free ShackBurger to each person who downloaded it between Jan. 23 and Feb. 28. It ended up giving away nearly 90,000 burgers, worth around $500,000, CEO Randy Garutti said at the time.

The chain reported a 2.5 percent decline in same-store sales for that quarter, which it attributed in part to that giveaway. But the chain’s same-store sales also declined, by 1.6 percent, in the quarter ended Sept. 27.