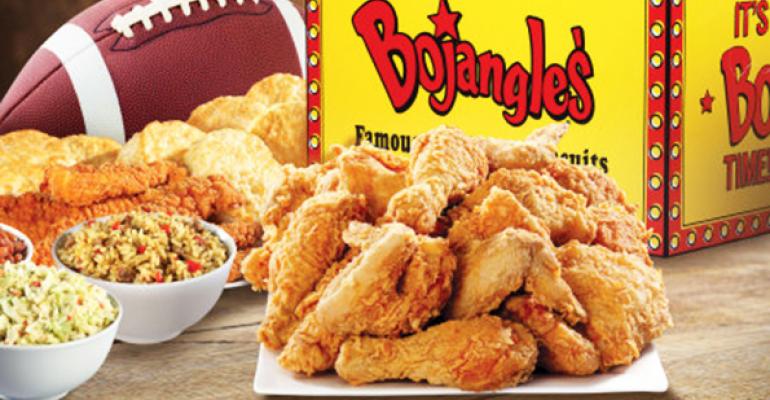 Restaurants have run onto the promotional playing field with as much enthusiasm and will to win as college and professional teams in fall football season.

From Papa John’s hiring players as official spokesmen, to Buffalo Wild Wings providing fantasy football kits, brands continue their longtime affiliation with the game and its ability to build awareness and sales.

“We recognize that our fans are also huge college football fans, and we feel that there is no better sports property to reach these consumers than College GameDay,” Jared Drinkwater, Pizza Hut vice president of marketing, said in a statement.

“From the television audience, to the volume of fans reached each week on the road, this program engages fans in ways most programs do not,” Drinkwater said. “We cannot wait to bring college football fans an exciting experience each week throughout the season.”

Pizza Hut has crafted its College GameDay promotion around the popular fan signs. During the first College GameDay telecast on Saturday, Sept. 5, in Dallas-Fort Worth, Pizza Hut will offer a sign, among many displayed by fans in a typical game, that will unlock a special offer.

College football fans who spot the Pizza Hut sign and code during the telecast will be rewarded with a promo code for a free, large, one-topping pizza. The code will be valid through Sept. 11 for orders placed at the brand’s website, and will be available to the first 10,000 people.

“We're rewarding college football fans in the best way by giving them the perfect game-watching food: pizza,” Drinkwater said. “All they have to do is watch for the sign — an integral part of the College GameDay experience.”

Pizza Hut is piggybacking a social media promotion on GameDay each week as well, urging Twitter users to post their signs with the hashtag #signupforgameday. One weekly winner will have their sign selected to become part of that week's ESPN College GameDay telecast and get a year's worth of pizza, the company said.

At the end of the season, Pizza Hut will name its Commissioner of the Year, who will receive a custom Jostens-designed ruby and diamond-encrusted commemorative ring valued at an estimated $10,000.

Bojangles Restaurants Inc. has set its sights on tailgaters by promoting its Big Bo Box, a selection of chicken, buttermilk biscuits, sides and iced tea.

The Charlotte, N.C.-based quick-service chicken brand has aimed its promotion at both football fans and NASCAR adherents.

“Our devoted fan base tells us every year that tailgating with a Bojangles’ Big Bo Box is a highlight of the fall sports season in the Southeast,” Randy Poindexter, Bojangles’ senior vice president of marketing, said in a statement, adding that “sports fans are looking for great-tasting, quick and easy options for their tailgate gatherings.”

As of June 28, Bojangles' had 646 restaurants, primarily in the Southeast.

Since the middle of August, Buffalo Wild Wings has been offering “Fantasy Football Draft Party Kits” in conjunction with Pepsi.

The Minneapolis-based casual-dining chain provides the kits to groups of eight or more who register to hold their fantasy draft party at any of the brand’s 1,120 restaurants, which includes a fantasy draft board, player stickers, coupons for free food on future visits, a brag flag, coasters and bottle openers. Those kits are also available for free to fantasy football parties that order $100 in takeout.

Guests who use the kits will also find coasters with codes that they can text to a number to enter a contest for prizes. The “draft party” theme is being featured in a TV ad that has been aired on sports channels, including this week on the NFL Network.

Buffalo Wild Wings is also tying philanthropic efforts into the football season by bringing back two fan-inspired selections from its sauce library for a limited time.

The chain is selling bottles of the Ghost Pepper and Bourbon Honey Mustard in its restaurants, with $1 from each bottle sold going to the Team Up for Kids hungry sports programs that are sponsored by the Boys and Girls Clubs of America.

“When guests stop by Buffalo Wild Wings to enjoy their favorite limited-time-only sauces, they can join our efforts to help kids play team sports in communities across the country,” Mary Twinem, executive vice president and chief financial officer of Buffalo Wild Wings, said in a statement. “We are happy that our Guests can join our Team Up for Kids mission to bring youth sports into the lives of kids who need it most.”

In May, fans voted for their favorite sauces via Twitter, using the hashtag #BWWSauceVote, from among 10 contending flavors.

Domino's is taking football season as an opportunity to highlight its new “AnyWare” ordering technology, and is employing a wide spectrum of celebrities to drive home the point.

Sherman, for example, professes his love for ordering Domino’s via Twitter.

"Thanks to the AnyWare suite of technology, customers can place their favorite order via text, tweet, TV, smartwatch and more," Dennis Maloney, Domino's vice president and chief digital officer, said in a statement.

“Domino's newest TV commercials showcase celebrities placing orders on their favorite devices,” Maloney continued, “proving that, for every type of personality and in any situation, there's a perfect way to order."

To use Domino's AnyWare, customers must have a “Pizza Profile” with a saved “Easy Order.”

Domino's has more than 11,900 locations worldwide.

Papa John's International Inc., which has invested as the “official pizza sponsor” of the National Football League, has added another professional player to its roster of spokesmen: J.J. Watt, who is the 2015 NFL Defensive Player of the Year.

Watt, a defensive end with the Houston Texans, joins five-time NFL Most Valuable Player Peyton Manning as an official spokesman of the Louisville, Ky.-based brand.

“We went for two and scored big with the addition of J.J. Watt to our all-pro starting lineup," John Schnatter, Papa John’s founder, chairman and CEO, said in a statement. "J.J. and Peyton share my passion for always striving to improve — whether it's pizza making or playmaking — and becoming even better at their craft."

As part of a multi-year deal, Watt will appear in a national advertising campaign with Schnatter and Manning during the NFL football season. Watt previously worked with Papa John's in Houston, appearing in local television commercials and participating in fundraising efforts for the Justin J. Watt Foundation.

"I appreciate Papa John's continued support of my foundation and look forward to taking on a role I happen to be quite familiar with — delivering pizzas," Watt said.

Between now and Sept. 27, Papa John’s is also offering a special on a large two-topping pizza for $10, with the option of added a Double Chocolate Chip Brownie for $6.

Papa John's, which has more than 4,600 restaurants worldwide, is in its fourth year as the official pizza sponsor of the NFL.

Update: Sept. 3, 2015  This story has been updated to include pricing for Bojangles' tailgating specials.