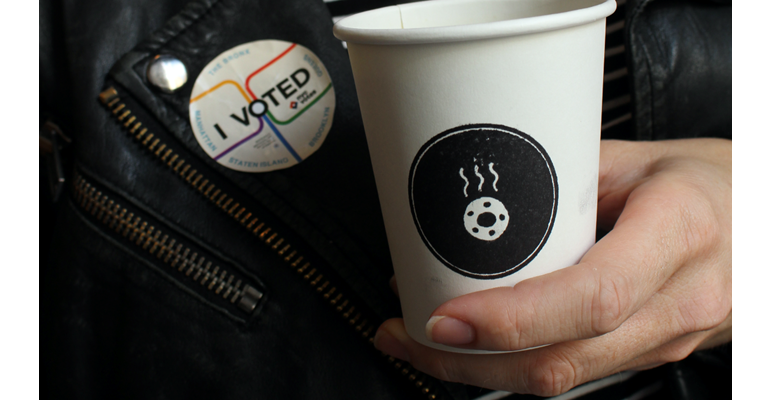 Black Seed Bagels customers can receive free cups of Stumptown Coffee with any purchase when they present their voter sticker at its four New York locations.
Marketing

Offering food-and-drink deals on Election Day? It may not be legal

Discounts tied to voting could be seen as attempt to influence

Earlier in October, Sanford Speake’s restaurant Sycamore in Columbia, Mo., was planning an Election Day promotion: half-price sandwiches for anyone age 18 to 30 on Nov. 6 if they wore an “I voted” sticker.

But by last week, the promotion was canceled after a comment on the restaurant’s Facebook page raised questions about whether such promotions are legal.

The restaurant wasn’t threatened with an actual lawsuit, Speake said.

“But we’re just a small independent with about 30 employees. We don’t have the resources to deal with that kind of lawsuit if it came up. So we just canceled it.”

It’s an issue that has cropped up periodically across the industry for years. 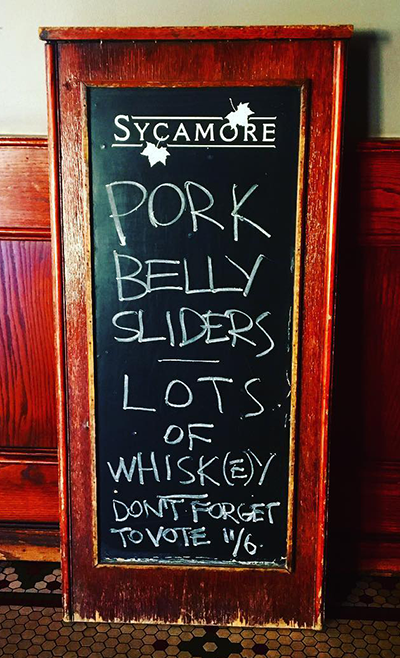 Election scholars contend that promotions tied to voting could be seen as offering a reward or benefit to win votes for one candidate or another.

“It is illegal in elections when federal candidates are on the ballot to offer free stuff (including free food or drink) to people upon proof of voting,” said Rick Hasen, a law professor at UC Irvine.

Attorneys agree, saying a federal statute prohibits anyone who knowingly or willfully pays or offers to pay, or accepts payment, for registering people to vote or for voting, said Anita Stearns Mayo, special counsel with Pillsbury Winthrop Shaw Pittman LLP in San Francisco.

“Cases have interpreted this prohibition to apply to situations in which the benefit offered was something of value other than cash. So offering a discount on food or drink as an incentive to vote may very well fall under this prohibition,” she said in an email. Violators could be fined up to $10,000 or face up to five years in prison, or both.

Yet such promotions continue to occur across the country. In just about any city, restaurants and bars are offering discounted food and drink tied to voting. Such efforts are carefully nonpartisan — the more people vote, the better for democracy, many say.

The San Francisco-based fast-casual chain Sajj Mediterranean, for example, on Nov. 6 will treat customers with “I voted” stickers to a free dessert — its signature baklava or chocolate hummus.

“Our objective is to encourage people to vote, regardless of party or preferences,” said Zaid Ayoub, Sajj founder and CEO, in an email. 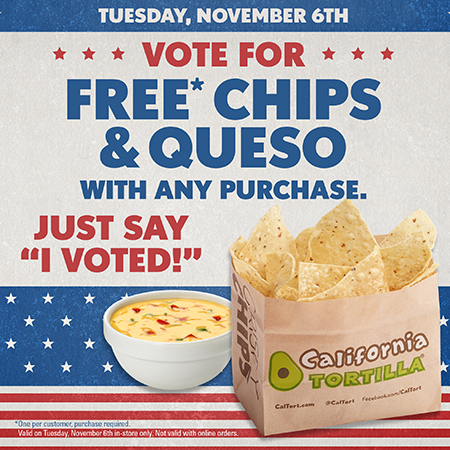 Likewise, the 50-unit California Tortilla chain, based in Potomac, Md., is offering a free order of chips and queso to any guests that just say, “I voted.” Corner Bakery Café, with units in 26 states and the District of Columbia, is offering a free coffee to those with voter stickers.

In New York, the restaurant Left Bank is waiving wine corkage fees for voters. And Black Seed Bagels is offering free cups of Stumptown Coffee with any purchase to guests that present their voter sticker at its four New York locations.

When asked about it, however, both Left Bank and Black Seed Bagels said they would honor the Election Day deals for anyone who asks for them, and the promotions were simply meant to raise awareness for Election Day.

There are other food-related efforts related to voting as well.

A nonprofit dubbed Pizza to the Polls raises money to have pizzas delivered to polling sites with long lines as an incentive for voters to stay and complete their civic duty.

The public at large is invited to identify polling sites in need of sustenance via social media, and the group uses the SliceLife pizza delivery app to identify nearby pizza shops that deliver.

The idea is that “waiting in line sucks. Waiting in line with pizza sucks a little less,” according to the organization’s website.

A spokesman for Pizza to the Polls said in an email, “It’s a tricky area, but we’re confident it’s not illegal to give food to people who have already decided to vote and are at a polling place.”

It’s no different than employers letting workers take the day off to vote, or people who offer rides to the polls, he said.

For operators like Speake at Sycamore in Missouri, the idea of his restaurant’s promotion was simply to encourage younger consumers to get out and vote — and to dine at his restaurant.

“It was a promotion to get an underrepresented demographic of voters and diners to come out to our restaurant. That was it,” he said.

But there is a solution, he suggested — one that Hasen of UC Irvine agrees is legal: Open the discounts and freebies to all on Election Day, not just to those who vote.

Speake said his restaurant will offer half-price items to all on Nov. 6, and he’s expecting a brisk business. News coverage of the potential legal issue has brought more attention to Sycamore than the promotion ever could, he said.

“We don’t even have TVs in the restaurant, so a watching party doesn’t make sense. But quite of few people have said they’re coming in anyway,” he said. “The bigger picture is it probably will turn out for the better.”