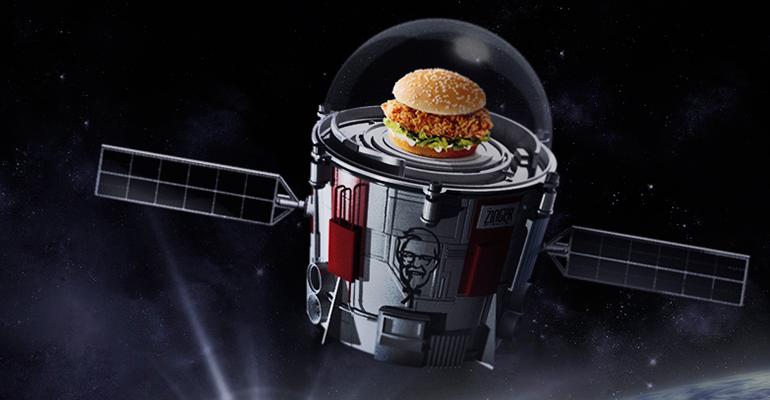 KFC to send a sandwich into space

Chain announces deal to send its Zinger into the stratosphere

KFC is sending a sandwich into space.

The Louisville-based chicken chain on Tuesday said that it plans to send its Zinger sandwich into space next week via high altitude balloon flight.

KFC is working with World View, a company that has developed technology that can put payload to the edge of space at a relatively low cost by using stratospheric balloons.

“We’re excited to be the ones pushing crispy chicken sandwich space travel forward,” Kevin Hochman, KFC’s U.S. president, said in a statement. “But in all seriousness, we’re proud to support World View’s commitment to advancing space research and trust them to take our world famous Zinger sandwich to space.”

World View’s Stratollite system is not like a typical balloon. It can execute a variety of flight profiles — such as circumnavigating the Earth over a specific location, or maintaining position over specific areas for days, weeks or even months. World View will use this system to send a Zinger into space starting June 21. It will be the longest controlled stratospheric balloon flight with a commercial payload in history, and the Stratollite system’s first multi-day mission.

Essentially, World View can get payloads to and from space without rockets. The company believes this has considerable potential, with Stratollites serving as wifi hubs in remote areas, or helping monitor crisis situations from a previously inaccessible vantage point. Future flights could predict weather patterns or help with disaster response.

“The Stratollite was created to deliver meaningful access to space for all,” Taber MacCallum, World View’s co-founder and chief technology officer, said in a statement.

“This mission offers edge-of-space access to KFC, allowing them to embark upon a one-of-a-kind marketing experiment, while we get to pursue maiden, multi-day Stratollite shakedown cruise and open unprecedented access to the stratosphere. It’s a double win.”

The Zinger is a popular item at KFC’s locations worldwide but the chain only introduced it stateside earlier this year. The company in April revealed Rob Lowe to be the latest iteration of Col. Sanders, and he vowed to put a Zinger into space.

The Zinger is a breaded chicken breast filet served with lettuce and mayonnaise on a toasted sesame seed bun.

KFC has created a website for its zinger flight.