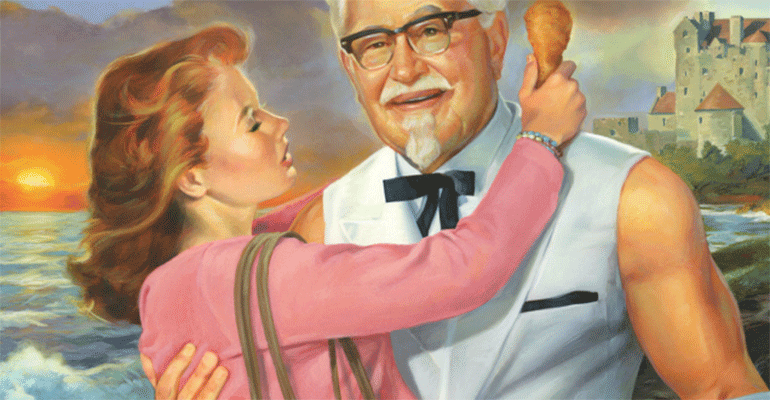 KFC’s newest version of Colonel Sanders is a love interest in a romance novella.

Yes, you read that right. To celebrate Mother’s Day, the venerable chicken chain this week released “Tender Wings of Desire,” featuring none other than its famous founder, Harland Sanders, as a love interest with a mysterious past. The company has made the novella as an e-book that can be downloaded for free on Amazon.com, and KFC is surprising 100 fans on Facebook with the chance to win dinner and a hard copy.

“The only thing better than being swept away by the deliciousness of our Extra Crispy Chicken is being swept away by Harland Sanders himself,” George Felix, director of advertising for KFC U.S., said in a statement. “So this Mother’s Day, the bucket of chicken I get for my wife will come with a side of steamy romance novella.”

The novella is part of KFC’s aggressive, and innovative, use of its founder in a series of advertisements — including several television ads featuring different actors and comedians playing the role of Sanders. But the company has also used Sanders’ image frequently inside its restaurants and has a website devoted to his story. The company has also published comic books featuring Sanders.

Mother’s Day is no laughing matter to KFC. It’s the chain’s best selling day of the year. Sales jump 40 percent on that day, as KFC serves 380,000 families each year on that day.

The novella is set in Victorian England, and follows the rebellious Lady Madeline Parker, who ran away from Parker Manor and a loveless betrothal to be more in control of her life. She is swept into the arms of Harland, a handsome sailor with a mysterious past. Madeline must choose between a life of order and a “man of passion.”

The novella includes passages like this, when Madeline first meets Harland.

“Madeline had never seen a sailor wear glasses before; somehow that made him seem all the more handsome. He leaned on the bar, his eyes looking into hers, and liking what he saw. This wasn’t like when Carson had appraised her; this was different. And for a moment she felt hot and cold at the same time.”