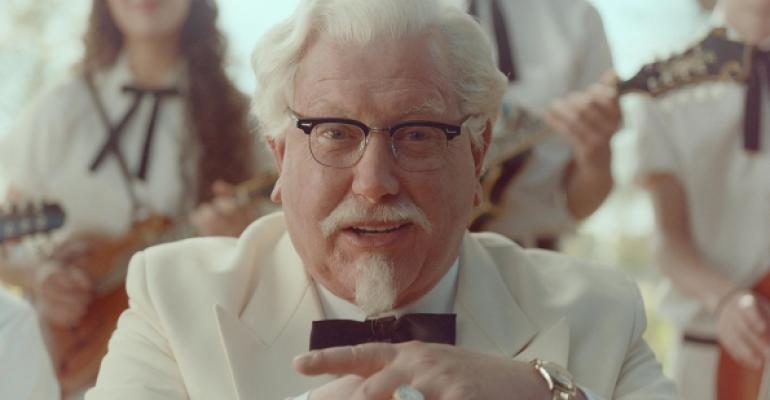 In his first commercial for KFC in years, Colonel Sanders — played by comedian Darrell Hammond — admits that he’s been gone a while, and that a lot has changed over the years, including that people now have everything from a Space Station to cargo pants.

“What you don’t always seem to have these days is my Kentucky fried chicken!” Hammond, playing Sanders, exclaims. “Well, I’m here to change that, folks. I’m here to make sure my chicken is still as tasty and delicious as it ever was.”

It was a frank admission for the quick-service chain, whose sales have struggled for more than a decade. During that time, KFC saw its dominance as the country’s largest chicken chain erode. Chick-fil-A is now the largest quick-service chicken chain in the U.S., and a host of bone-in competitors, like Popeyes Louisiana Kitchen and Bojangles’, have been eating into KFC’s market share.

But it was also a declaration that KFC means business as it works to reassert itself in the chicken market.

Sanders will be everywhere as part of KFC’s rebranding: In a series of television ads, marketing materials, an online game and inside the thousands of restaurants the company plans to remodel over the next three years. KFC has also launched a website, ColonelSanders.com, that describes the famous founder’s life and history.

“When we were at our best, Colonel Sanders was at the center of everything we did,” said Kevin Hochman, chief marketing officer for KFC U.S. “He wasn’t just a spokesperson. He followed up and delivered on the values of the brand.”

The new marketing campaign is part a massive overhaul, fueled by a $185 million, multi-year investment from parent company Yum! Brands Inc. The overhaul includes a major remodeling effort, in which the company plans to spruce up 70 percent of its 4,300 locations in three years.

Restaurant exteriors will be white, with red awnings and a red-and-white striped focal point, with Colonel Sanders’ face featured prominently. “World Famous Chicken” will be written in large letters along the side of the building.

Inside, there will be more red and white stripes, and more pictures of and quotes from The Colonel. Taking a cue from fast-casual concepts like Five Guys Burgers and Fries, a chalkboard near the register will tell customers the name of the farm that day’s chicken comes from, as well as the name of the cook frying the chicken.

“We’re getting succulent, small chickens from regional farms,” Hochman said. “They cost more than the grocery store. They’re breaded, fried and tested by cooks who are expertly trained. That’s a point of difference versus other QSRs.”

A fresh look and redefined menu

Hochman said early tests of the new remodels in Louisville and Las Vegas have been successful. The company is building seven more units in Atlanta, and wants to get the kinks out before kicking remodeling into high gear. Yum’s investment includes incentives to get franchisees to remodel locations. The company also lowered the cost of the remodels, although the average cost was not available.

Many of the chain’s restaurants are older and in need of updating, and current quick-service strategy requires updated locations.

“This is a critical piece to the relaunch of the brand,” Hochman said.

The company is also introducing new menu items, such as Dole Classic Lemonade, which will be part of the Colonel’s Summer Meal, along with eight pieces of chicken, four biscuits and two sides, including Kentucky Baked Beans with pulled chicken.

There is also Finger Lickin’ Good sauce, flavored with KFC’s Original Recipe seasoning, and to be paired with KFC chicken, Extra Crispy Tenders and Popcorn Nuggets.

The new items are part of what Hochman called the company’s “rededication” to its Original Recipe Chicken. Although he wouldn’t divulge any details, other menu extensions of the original recipe could follow.

“The original recipe is special,” he said. “Also, it’s pressure-fried, not open-fried, with a combination of 11 herbs and spices. The idea can be translated beyond chicken on the bone.”

While KFC is kicking off its relaunch, it actually started the engines last year. Although total systemwide sales fell 1 percent in 2014, same-store sales have increased each of the past three quarters. That includes a 7-percent increase in the first quarter of this year, which ended March 21.

The increase has been fueled in part by the company’s $5 Fill-Up Box, which offers customers a choice of items, along with side dishes and a drink, for $5. The idea came from a franchisee, Dick West, was tested and performed successfully.

He added that sales of fried chicken and buckets are also growing.

The Colonel is back to continue that momentum, in a year that coincides with the 75th anniversary of Sanders’ development of the fried chicken recipe. The chain also hopes that his reappearance conveys to customers the founder’s demand for quality.

“Those beliefs and values are throughout the system,” Hochman said. “The Colonel would visit restaurants, and if the chicken was not made properly, he would go back and show them. He would take a golden spoon with him and taste the gravy, and if it didn’t taste good, he would dump it on the floor. He was a big part of the brand and the values it’s all about.”