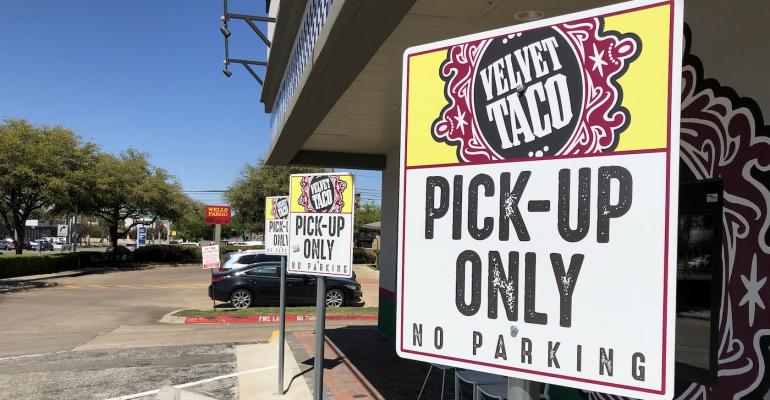 The one-day Great American Takeout, supported by a coalition of restaurant brands on Tuesday, appeared to give the industry a sales boost amid the coronavirus sales carnage and helped expand awareness as operators turned to off-premise sales for survival

Spearheaded by the Los Angeles-based High Wide & Handsome ad agency and supported by a wide range of restaurant companies from Panera Bread to Dine Brands Global Inc., #TheGreatAmericanTakeout was a social-media happening to help restaurants struggling under state and city restrictions aimed at stemming the spread of the virus.

“Our campaign generated more than 28,000 tweets and 21,000 Instagram posts,” said an HWH spokesperson on Wednesday.

The Great American Takeout's visibility helped, said Clay Dover, CEO of the Dallas-based 14-unit Velvet Taco fast-casual brand, which has temporarily closed five units and relied on pickup windows and one drive-thru at the remaining nine. He said Tuesday sales were the best year-over-year comparison for the past week and a half.

“We have some new projected sales goals,” Dover added on Wednesday, “and yesterday we exceeded those goals by 61% with the help of The Great American Takeout.”

Dover added that he “would like to see something regularly (Tuesday Takeout day – support your local restaurant) with some more planning and effort behind it PR-wise.”

Sarah Grover, Interim chief marketing officer of Culver City, Calif.-based Veggie Grill, one of the restaurant brands in the coalition, said in a statement: “Unprecedented situations mean we must think and act in ways like never before.” Veggie Grill has about 40 units.

“The concept of #TheGreatAmericanTakeout demonstrated how people are hungry for a connection and community right now,” Grover continued. “Our employees, their families and our industry are experiencing incredible hardship, and we decided it is up to us to band together now.”

Grover noted that “a collective effort and united voice during a time of crisis will always have a far greater impact than if we go it alone” and suggested brands continue to use the hashtag #TheGreatAmericanTakeout “so the awareness continues well beyond today and this crisis.”

Since launching the Great American Takeout, the organizers have created a website with additional information and teamed with suppliers to benefit the CORE (Children of Restaurant Employees) non-profit organization.

For every social post with #TheGreatAmericanTakeout hashtag on Tuesday, Smithfield Foods said it would make $5 donation, up to $100,000, to the organization dedicated to serving food and beverage service employees with children who are faced with qualifying life-altering circumstances and in need of support.

Correction March 25, 2020: This story has been edited to correct the Velvet Taco unit count.